Media > Movies > Was The Hangover II Script Ripped Off?

Was The Hangover II Script Ripped Off? 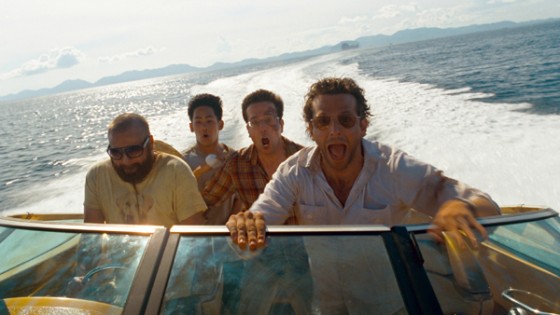 The Hangover II has once again fallen prey to a frivolous lawsuit. It has nothing to do with a tattoo or a brain-damaged stunt man. No, this one claims the script itself was based on an actual man’s disastrous Asian honeymoon. Break down the legalese, Hollywood Reporter:

According [Michael Alan] Rubin’s federal lawsuit, filed last week in California, he married a Japanese woman named Tamayo in 2007 in Japan. Together, the couple honeymooned in Thailand and India where differences started arising over Rubin’s financial condition. During the honeymoon trip, Tamayo refused to share a hotel room with the luckless plaintiff.

Okay, the part about him being poor and not getting laid sounds more than plausible. Especially since his name is Michael Alan Rubin. I’m guessing the Japanese chick was, ahem, bought and paid for, if you get my meaning. Wait, there’s more!

In India, Rubin says he met a Bollywood producer who gave him work as a leading actor on several films. At which point, Rubin wanted to turn his experience with Tamayo into a feature film, so he wrote a script entitled Mickey and Kirin and allegedly deposited a copy with the Writers Guild of America. He later heard from a Hollywood friend about Hangover II, the story of some Asian misadventures by Americans on the road to a wedding.

A leading actor? Even in Bollywood flicks, I smell a rat.

Rubin is suing for copyright infringement, misappropriation of his publicity rights, and defamation. On the latter claim, he believes the filmmakers suggested the inference that he was under the influence of drugs when he ditched his girlfriend and proposed to a male-to-female transsexual prostitute.

Alright, this clown has gotta be fibbing. Who would cry defamation about drug use and trannies? Those are the best parts. Plus, where’s the capuchin monkey, severed finger and Mike Tyson? This Michael Alan Rubin fella is obviously full of poop.

Here’s how I think this whole scenario went down: Rubin traveled to Thailand to get himself one of those underage brides, but his bride turned out to be a transvestite grifter who took him for everything he was worth. Humiliated by his experience, Rubin fled to India and got a job shoveling elephant dung at a circus. One night, after imbibing copious amounts of cheap red wine, he passed out on a bale of hay and dreamed he married a beautiful Japanese woman who refused to sleep with him because he was a penniless dork with delusions of grandeur. End scene.