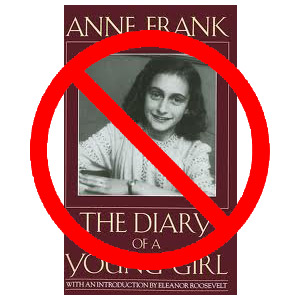 With most forms of entertainment, a single complaint is sometimes enough for the powers-that-be to take action. The FCC often dishes out fines to a network because an old lady in Omaha was offended by a reference to homosexuality on Will & Grace (I made that up but you get the point). Then there are books. Libraries, schools, and governments routinely ban books for closed-minded reasons, and those reasons are brought to attention during Banned Books Week, which is Sept. 25 – Oct. 2.

The reasons that books are banned in certain places typically fall into these buckets: Too political, too much sex, irreligious, and socially offensive. Rarely are books banned just for sucking – a legitimate reason – like most new James Patterson books.

Some of these banned books are quite familiar: Uncle Tom’s Cabin. The Grapes of Wrath, Animal Farm, Jaws, Lord of the Rings, Harry Potter, To Kill a Mockingbird, and Gone With the Wind, for example. A conservative clergy banned The Scarlet Letter due to adultery themes (as if the Bible doesn’t have any of those).

Realistically, banning a book in the U.S. means school children at some redneck high school might not be able to read Huckleberry Finn until they get older. It’s a work of fiction, anyway, and there are no works of fiction important enough that everyone must read right away. It’s not that we shouldn’t be opposed to the censors, but any parent who disagrees with the censorship can get the book for their children, themselves.

It’s the non-fiction books we should be REALLY pissed off about. The Diary of Anne Frank, the journal of a young girl who was hiding from Nazis during the Holocaust, is banned in several places, including a version in Culpeper County, Va., because “a parent complained the book includes sexually explicit material and homosexual themes.” Members of the Alabama State Textbook Committee called for the rejection of this book because it is a “real downer.” In Wise County, Va. (oh the irony) it was challenged by parents who found some passages sexually offensive. It was briefly removed from a Corpus Christi middle school when parents complained it was pornographic. It’s also not on the shelves in Lebanon because “all books that portray Jews, Israel or Zionism favorably are banned.”

This is a book written by a young teen logging the last days of her life during World War II, yet parents are trying to ‘protect’ their children because Frank, like all teens, starts writing a bit about sex?

And Lebanon, you won’t let your kids read this book because why? Because she’s a Jew who deserved to be hunted to death and had no right to tell her side of the story? I wonder what Iran’s take is on this book. At the very best, it’s marked as fiction over there.

There is only one reason why books should be completely banned:

Here’s a good video that sums up Banned Books Week.