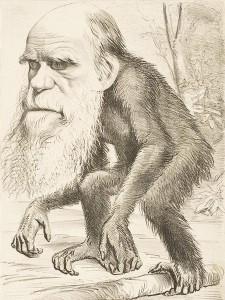 That’s right, not only do Charles Darwin and Abraham Lincoln share a birthday, they’re actually exactly the same age. They both turned 200 today! Charles Darwin published his “The Origin Of Species” in 1859, and it’s been surrounded by controversy (at least with Fundamentalist Christians) ever since.

Here are a few examples:

A 50-year-old man was bird hunting in Upstate New York with his buddies and his faithful canine companion. They stopped for a smoke, and his dog found a deer leg bone!The man tried to take the bone away, but like any right thinking dog, the animal would not relinquish its treasure. He stayed just out of reach. Frustrated with this blatant show of disobedience, the man grabbed his loaded shotgun by the muzzle and began wielding it like a club. Each time he swung it, the dog dodged.

Suddenly the “club” struck the ground and fired, shooting the man in the abdomen. He was airlifted to a nearby hospital, where he died from his injuries. He did remain conscious long enough to confirm this account to police; otherwise, his poor friends might now be under suspicion!

At least he didn’t hit the dog.

The following mind-boggling attempt at a crime spree appeared to be the robber’s first, due to his lack of a previous record of violence, and his terminally stupid choices:

2. The shop was full of customers – firearms customers.

3. To enter the shop, the robber had to step around a marked police patrol car parked at the front door.

4. A uniformed officer was standing at the counter, having coffee before work.

Upon seeing the officer, the would-be robber announced a holdup, and fired a few wild shots. The officer and a clerk promptly returned fire, covered by several customers who also drew their guns, thereby removing the confused criminal from the gene pool.

No one else was hurt.

Some men will got to extraordinary lengths to prove how macho they are. Frenchman Pierre Pumpille recently shunted a stationary car two feet by headbutting it. “Women thought I was a god,” he explained from his hospital bed.

Deity or not, however, Pumpille is a veritable girl’s blouse compared to Polish farmer Krystof Azninski, who staked a strong claim to being Europe’s most macho man by cutting off his own head in 1995. Azninski, 30, had been drinking with friends when it was suggested they strip naked and play some “men’s games”. Initially they hit each other over the head with frozen turnips, but then one man upped the ante by seizing a chainsaw and cutting off the end of his foot. Not to be outdone, Azninski grabbed the saw and, shouting “Watch this then,” he swung at his own head and chopped it off.

“It’s funny,” said one companion, “when he was young he put on his sister’s underwear. But he died like a man.”