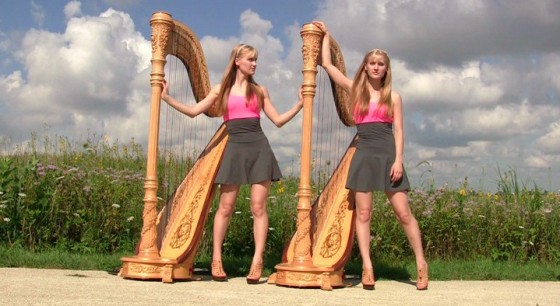 A pair of young, identical, angelic-looking harpists are making Internet waves recently, strumming pleasant tunes and turning heads in droves. But it’s not the sound of typical heavenly riffs that are catching everyone’s attention. That’s… Metallica and U2 and Guns n’ Roses they’re hearing.

Twin sisters Camille and Kennerly Kitt are making the harp cool with a series of videos of them playing everything from heavy metal songs to video game themes. With more than 17,000 subscribers and 3.7 million views, the Harp Twins are defying the stereotypes of traditional harpists and classical musicians. One of their latest videos, a cover of Metallica’s “Nothing Else Matters,” got 50,000 views in the first week of release.

The sisters, who play both the electric and acoustic harp, began their musical aspirations on the piano before embracing the harp in junior high. “Many people assume we have been playing harp a lot longer, but we had to convince our mom that we were serious about learning harp.  She worried it might just be an overly expensive whim.” Now, their harp skills are taking them all over the country as they perform at political banquets, county fairs, awards galas, fundraisers and private events.

But it’s not just Lady Gaga and Taylor Swift covers they play – they also compose their own music. “We find musical inspiration everywhere. However, we are always most inspired by those who step out of the box – the people who take risks and defy conventionality. Music has always evolved through the people who aren’t satisfied with the status quo.” 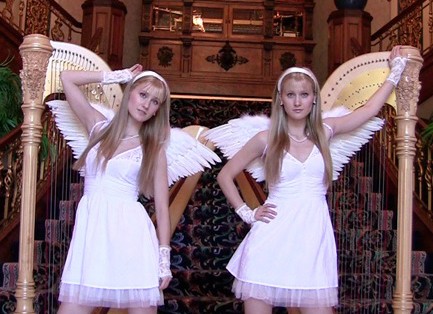 Aside from music, they’re breaking into acting in commercials, film and television, including the upcoming Creeporia. And while performing, acting, and making videos is keeping them busy, they have plenty more they’re hoping to accomplish. “We would also love to perform someday with a rock band or pop artist! Bringing harp more into the mainstream, continuing to challenge ourselves, and breaking new ground is our focus, but we’re always are open to traveling down different roads. Most importantly, we want to share our music with as much of the world as possible.”

The sisters, who may be the only set of identical twin harpists on the planet who are also Tae Kwon Do experts, are virtually inseparable. “We love reading, writing, working-out, spending time with family and friends, and volunteering with special needs children and young adults. We always have more fun when we are together.”

Any major differences between them? “Nope!” (Update: We found ONE!)

All hasn’t been easy, however, as Camille and Kennerly have felt some pushback from traditionalists in the classical music world. The sisters find that their look and twin factor can work against them because they have to keep proving that they’re not a gimmick. “We are constantly swimming upstream in a world of people who tell us to “sit down,” “stop moving,” and “play the music intended for the harp.” We are working against a societal prejudice against harps being able to really rock.”

These critics may just be jealous, however, as an ever-growing fanbase keeps begging for more. Camille and Kennerly are extremely active on Facebook and Twitter, where they keep fans updated on their adventures and treat them to occasional free musical downloads. Their biggest news recently is the availability on iTunes of some of their more popular covers. And there is more to come.

“We have embraced who we are, and we do what we love. We believe that people are ultimately drawn to those who have joy in what they do and who they are.”