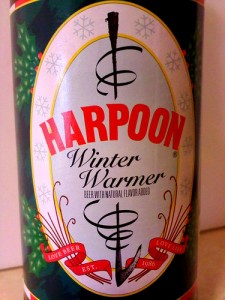 Information: (Site) “Winter Warmer was Harpoon’s first seasonal beer. It was designed to be enjoyed during the holiday season. When you bring a glass of this dark copper ale to your lips to take your first sip you will notice the aroma of cinnamon. There is no aromatic hop added that might overpower the distinct spice scent. The medium body of this beer is formed from caramel and pale malts. These create enough body to support the spices without making the beer excessively rich. Bittering hops are added to counter the sweetness of the malt and spice. The finish of the beer is a blend of cinnamon and nutmeg. The combination of these two spices results in a balanced, pumpkin-pie flavor. The overall character is a smooth, medium bodied ale spiced with cinnamon and nutmeg.”

Even before Halloween came around, Winter Warmer was on liquor store shelves. Normally Christmas Creep pisses us off, but this is a type we can get behind. It’s beer that tastes like pie. Why are you still reading this? Fine, fine, we’ll cover the rest.

Winter Warmer is a dark copper winter ale, brewed with spices like nutmeg, cinnamon, and cloves. The head is fairly modest, as you’d expect with a beer of this type. It leaves a bit of lace on the glass while you drink it. The spices give it a pleasant aftertaste that lingers. The cinnamon and nutmeg are the most prevalent, giving it a warmth. The ale itself is flavorful, but just enough to mix well with the spices; hops are used to offset the spices, but this isn’t a hoppy ale. Overall, it’s a medium-bodied beer. Putting away a six-pack will probably leave you sleepy, but one or two makes for a pleasant dinner with friends.

It’s best paired with something fairly mild that doesn’t interfere with the spices: this is not a beer to drink with the Afterburner Ultra Buffalo Wings from the pizza joint down the street. It’s not the craft ale you’ll find at local breweries, but it’s an excellent attempt to mass produce a beer of this type.