Harry Potter Was A Drunk 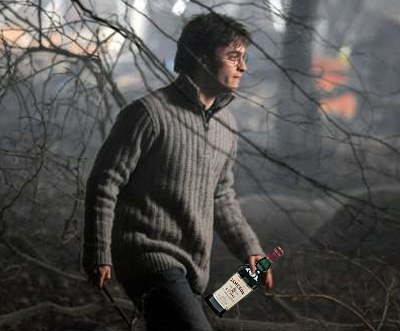 From the world of celebrity alcoholism comes this bit of news. Actor Daniel Radcliffe, who plays boy wizard Harry Potter, used to enjoy hitting the sauce. Hard. Like pull down your pants and piss on a sidewalk, hard. I made up the last part, but according to Radcliffe, he climbed into the friendly confines of a whiskey bottle at age 18 while filming The Half-Blood Prince. More like the Half-Blood Drunk, eh? Wink wink, nudge nudge.

Sadly, young Daniel was never captured defecating into a pool of his own sick behind some shady London dive bar by Britain’s esteemed paparazzi . Sadder still, it appears they won’t get the opportunity anytime soon because Radcliffe is on the wagon. In his own words:

“I’m actually enjoying the fact I can have a relationship with my girlfriend where I’m really pleasant and I’m not fucking up totally all the time. As much as I would love to be a person that goes to parties and has a couple of drinks and has a nice time, that doesn’t work for me. I do that very unsuccessfully.”

Boo!! What the hell is this kid’s problem? Doesn’t he realize his star is about to burn out once the last Potter flick comes and goes? He should be pounding shots like there’s no tomorrow to practice for the rest of his life, which will undoubtedly be lived in agonizing obscurity. Besides, everyone loves bitter old British/Irish drunkards. *looks at picture of Richard Harris and sighs*