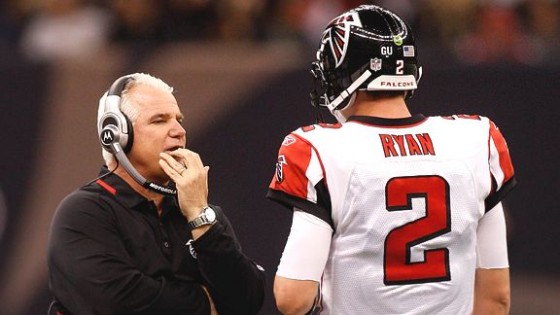 Sorry, Matty. I dozed off for a second.

I have nothing against the Atlanta Falcons. They seem like a respectable franchise with a strong football tradition and a decent-sized fanbase. That said, they are also one of the most ho-hum teams in the NFL with very few “characters” and “personalities.”

Which is why I’m scratching my head that HBO’s Hard Knocks wants them for the upcoming season. They are the exact opposite of what the show normally wants in reality entertainment. Ya know, self-promoting windbags like Terrell Owens and Chad Ochocinco, and arrogant blowhard coaches like Brian Billick and Rex Ryan. Atlanta has none of those types.

Mike Smith is, uh, I don’t even know… fiery? No, that can’t be right. Matt Ryan has ice in his veins. Does he, really? Or is he just another tall, overhyped quarterback like Philip Rivers, Joe Flacco and Tim Tebow. Michael Turner has huge thighs… ZZZZZZZZZZZZZZZ…

Maybe they could focus on male grooming techniques. Between Roddy White’s hair, Sam Baker’s beard and Arthur Blank’s mustache, there is more than enough ammunition to fill two or three episodes. It would still suck, but at least the producers would have another angle to pursue besides “will they ever win a playoff game?”

To be fair, teams ripe for the picking like Philly, the Giants and New Orleans (that would be fun) won’t allow cameras behind the scenes. And since the series generally prefers franchises that are expected to be contenders, this rules out potential hotbeds of dysfunction like Oakland, Washington and Miami.

I still say the 49ers are the ideal pick. Jim Harbaugh, Patrick Willis, Michael Crabtree, Randy Moss and Brandon Jacobs? That my friends is a recipe for a plate full of WTF moments.