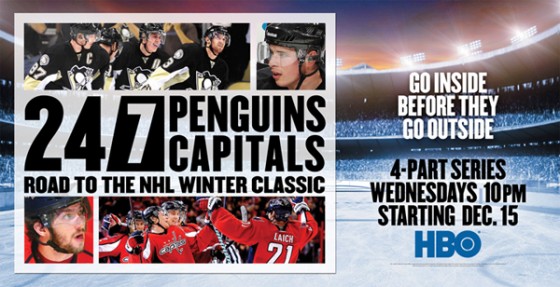 Reality TV at its best...

If you are like us at all, you love sports… you love reality TV… and you love violence.

If that sounds like you, you should be watching HBO’s new four-part series on what has become the signature event for a league on the rise. The 24/7 series is known as one of the best documentary formats in the sports media business and this season the folks at HBO have turned their cameras to the Winter Classic, a brilliant evolution of sports marketing constructed by the NHL that puts one of the elite games of the professional hockey season outdoors to play in the joys of the winter weather. They stick a rink in a premium stadium, they double up on whiskey and kegs, and they bring two of the best teams in the league together to do battle.

This year’s Winter Classic is only ten days away, and Gunaxin will be there for the grand event. It features the Washington Capitals, led by Alex Ovechkin, against the Pittsburgh Penguins, led by Sidney Crosby, on ice laid next to the river at Heinz Field in Pittsburgh … where winters go to die and the game’s brightest talents will continue to build on one of the best growing rivalries in sports.

Episode #1 hit the main stage on December 15th and the series continues tonight. The Home Box Office has a full menu of preview videos and clips on their site and you’ll find interactive schedules and news… but the joy of this documentary series shouldn’t be missed. Its Hard Knocks with balls, errr pucks… and more cursing. You should enjoy with family, friends, loved ones, and beer.

Here’s the thing. It is the holidays and it may be that a kick in the balls from our lovely economy has put you down for the count, and the thought of paying an additional spot on your cable bill for HBO doesn’t appeal.

Friends… today your prayers are answered… because the NHL, they get it. Here’s Episode #1, in full… in HD… FOR FREE. From our friends and yours at the National Hockey League.