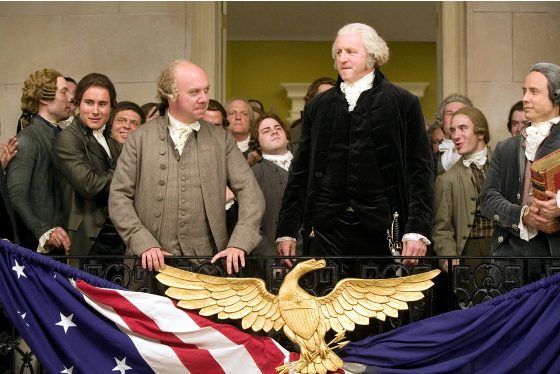 It’s a long-running yearly tradition at Gunaxin that we pick an American War movie to watch in honor of our brave men and women of the military on Memorial Day. We’ve also recently expanded that tradition to Independence Day as well. But instead of a war movie, we have a different recommendation for those who like to binge watch their entertainment via streaming services. It is something that truly depicts how our founding fathers fought and waged war for America’s freedom; HBO’s John Adams. This classic is still available to stream via HBO.

Debuting on the premium juggernaut in 2008, the program was released in seven parts to high ratings. It centers around the early life of the future second President of The United States, John Adams, and goes all the way to his retirement years and seeing his son, John Quincy Adams become President.

The rest of the iconic forefathers, Washington, Franklin, Jefferson and many others are present and accounted for. As with most HBO miniseries, the cast is star-studded and filled with amazing performances. Here are some of the key players and those who portray them:

Giamatti, an HBO favorite, takes the reins in the lead role and does not disappoint as the statesman, diplomat and political theorist turned soldier and eventually President.

Linney is terrific in the role of the future First Lady, Abigail, who many consider to be one of the biggest difference makers in the role. Women’s rights, Slavery and education were all tackled during her tenure.

Dillane plays the red headed polymath who would become President himself after being the principal author of The Declaration of Independence and envisioning America as an Empire of Liberty.

Morse portrays one of the most popular Presidents in American History and it’s first. The dominant military General reluctantly turned politician, he led an American victory over the tyranny of Great Britain in the American Revolutionary War.

Sewell is at home starring in another period-piece. An act that he has become known for. Here, playing one of the first constitutional lawyers in the history of America and the first Secretary of the Treasury.

Wilkinson does more than fly a kite in his Emmy worthy performance of Benjamin Franklin. Statesman, politician, scientist and diplomat, this series shows why he is on the $100 bill whilst never even running for President.
There are many, many more noteworthy performances and the cast is gigantic. For a full cast list, be sure to check out the web page dedicated to the triumphant series.

Whether you are a history buff or just swelling with pride this 4th of July, you won’t be disappointed with this one. But make sure you set plenty of time aside to binge, as it does have a running time of eight hours. But what else have you got to do between cooking some hot dogs on the grill and washing them down with your favorite beer? Have a safe and spectacular Independence Day!