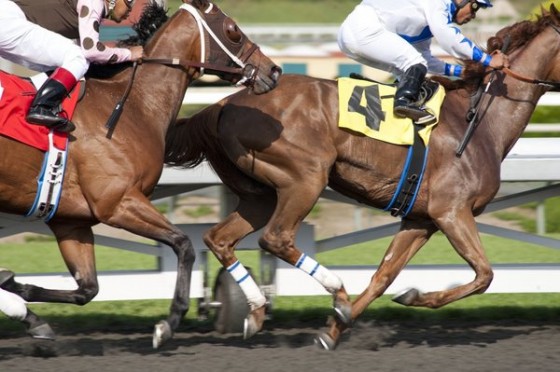 HBO’s new (and awesome) series Luck is set in the world of thoroughbred horse racing, meaning in order to deliver an authentic portrait, the creators use real horses and run them on real racetracks. Unfortunately, when real horses are raced there’s always a chance catastrophic injuries will occur. Sadly, that’s exactly what happened.

Eagle-eyed viewers may notice one detail missing from the pilot episode, as well as one additional installment: the American Humane Association’s usual seal of approval certifying that “No Animals Were Harmed” during the filming of the show. Instead, those two episodes state merely that “The American Humane Association Monitored the animal action.”

That’s because while Luck takes a hard look at those who exploit animals for money, the show itself has come under scrutiny after two of the horses used in the production broke their legs during filming and had to be euthanized.

The series has since regained its AHA certification after HBO beefed up protocols to help prevent animals from being harmed. Of course this hasn’t stopped PETA from raising a stink, which isn’t surprising.

As someone who watches racing, has frequented tracks and been known to gamble on the ponies from time to time, I’m fully aware of the sport’s perils. I’ve witnessed in person a horse breakdown and it’s not pleasant. That said, short of banning racing completely (never gonna happen), nothing can be done to eliminate horses from being euthanized.

Nevertheless, if you can get past the grisly parts (and I understand if you can’t), Luck is a fascinating look inside a world very few people get to see.