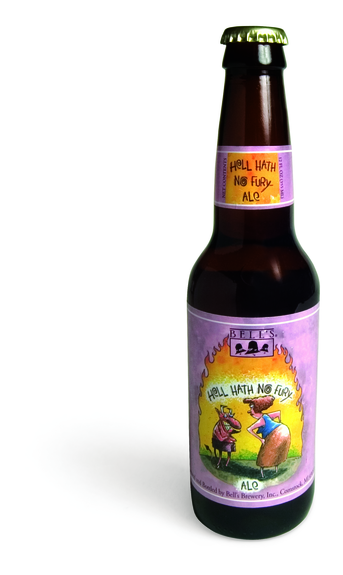 Information: From Site – “Originally conceived along the lines of a Belgian Dubbel, Hell Hath No Fury… Ale morphed during development into something entirely different. Blending a pair of Belgian abbey-style yeasts into a recipe more akin to a roasty stout, Hell Hath No Fury… Ale offers up warm, roasted notes of coffee & dark chocolate together with the fruity & clove-like aromas.“

It’s a treat when I somehow manage to come across a Bell’s beer that I haven’t actually tried. Especially one with a really cool label drawn by Dave Coverly of ‘Speed Bump’ fame, who just so happens to be from Michigan. Cool. Anyway, this particular choice is a seasonal fall brew from our buddies at Bell’s and one that has been out for a while, but only really rears its head in October. And *glee* it’s a dark-style beer! Oh goody!

The pour is just deliciously chocolate: rich, deep brown, thick head, and just completely full of roasty coffee notes and nutty, toasty cloves. There is a hint of fruitiness much like a stout, a bit citrusy but not so much so that it feels like an IPA, but it is there. The rising scents of mocha and espresso are so overpowering that it takes a good minute to locate much else. Amazing.

Wow, the flavors! Just a full-on menagerie of flavors hanging around in this one! Nutty, roasty malts, slightly hoppy, vanillas, and rich yeasts. As much as one could compare this to a stout in both the way it looks and a bit in the way it smells, it really doesn’t taste as much like one as you’d think. There is a throatiness of coffee and tight, cloying malted tang at the end that literally reminds you of maple sugar. Such a complex beer that would definitely take one more than a few minutes to enjoy. A simply wonderful autumn sample.

Rating: * * * * *
A rich and satisfying fall ale that will make anyone smile.