Brothers Toby and Tanner Howard (Chris Pine and Ben Foster, respectively) perpetrate a string of bank robberies that vex Texas Ranger Marcus Hamilton (Jeff Bridges) because of their odd nature. Hamilton’s partner, Alberto (Gil Birmingham), thinks Hamilton is just delaying retirement, but these relatively non-violent cash grab deals are just too strange not to investigate. Following a pattern of early morning hits, the Rangers end up waiting it out in a dusty old West Texas town where they plan to intercept the duo at their next target.

If Jeff Bridges were in every modern-day Western flick, it would never get old. Even Tommy Lee Jones would wear thin sooner in the genre. Somewhat crotchety, perpetually out of breath, but as we find out in the end not to be trifled with, his character eats up the cliché that it is, chews on it for a while, and spits out an archetype that makes everything else feel like a mere imitation. Partner Alberto tolerates Hamilton’s jokes at the expense of his Native American heritage (think Gran Torino, but like on Xanax with a West Texas drawl). Likewise, Alberto insists that his aging counterpart is a kooky old man working on borrowed time. 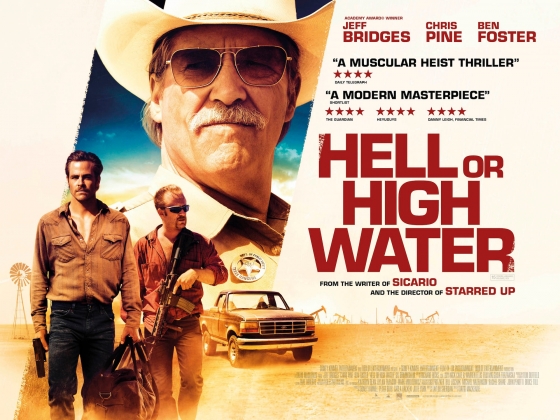 The brothers empty only the cash drawers for unmarked bills and only at a string of Texas Midlands Banks (fictitious), and intend to save the family ranch from foreclosure. Toby wants to ensure a future for his kids and ex-wife, who are sitting on millions in oil if Pine can get out of the relatively nominal debt and pay those pesky property taxes. Tanner’s motivation is less clear; he is more violent and less predictable with a history of incarceration. Toby has to request that Tanner not pistol-whip the bank tellers, but it gets worse after Tanner runs an impromptu solo job that unnecessarily speeds up the clock.

While the Rangers end up waiting in a dusty old town for Toby and Tanner’s next move, Pine and Foster create a dramatically pitch-perfect story of their own. Director David Mackenzie (Starred Up) mounts the suspense like a tightening rubber band about to snap; every primary character gets healthy development. Writer Tyler Sheridan wrote one of my top 3 films last year, Sicario ; though similar in its calculation, Hell or High Water is decidedly less cynical, less mechanical. There’s more emotion once the bullets start flying.

In a nutshell: Foster is perfect for this role, an amalgam of some previous characters he’s played villainous and otherwise, one of the few actors who can make me truly uncomfortable with a simple shift in gaze. This is Pine’s best performance, no doubt; much of the film focuses solely on his ability for intense dramatic acting without $200 million in FX to marvel at. What do I need to say about Bridges? Let’s talk more about the excellent Gil Birmingham, who makes it all look very easy; it’s subtle, but we find ourselves as attached to him as the characters billed ahead of him. This is a heist drama done right. Available on Blu-Ray November 22nd.