Where, oh, where to begin with Neil Marshall’s Hellboy? Does it follow too closely on the heels of Guillermo Del Toro’s 2004 thrilling and colorful adaptation of Mike Mignola’s comic series and its 2008 sequel? Or is it its script, overburdened with dragging expository paragraph after paragraph, which only gets matched by excessive, shoehorned gore sequences? 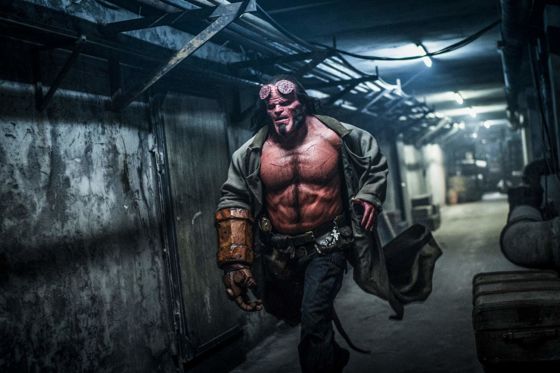 Man, this film tries way too hard to accomplish so little. In all of its 121-minute running time (including a scene after what feels like 10 minutes of credits), the only thing Hellboy has to say is… keep up the good fight, and one’s heritage does not dictate their outcome? These ideals probably would’ve landed a bit more firmly had screenwriter Andrew Cosby taken the time to fully flesh out his characters and their conflicts rather than opting for a script which plays the “they took that from _____ (name whatever movie or TV show)!” game. 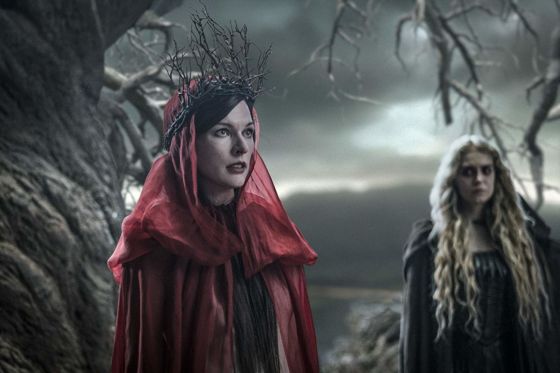 The very opening of the film says it all, its irreverent narration making light of a battle between King Arthur (Mark Stanley) and Blood Queen Nimue (Milla Jovovich), and the extent Arthur and his knights go to make sure Nimue can never rise to power again. Our narrator, Bureau for Paranormal Research and Defense (BPRD) founder Trevor Bruttenholm (Ian McShane) seems to relish his vulgar retelling, wanting to come off like Danny DeVito’s sleazy introduction to L.A. Confidential, yet it winds up more preachy and “PAY ATTENTION!” rather than inviting us into this world. 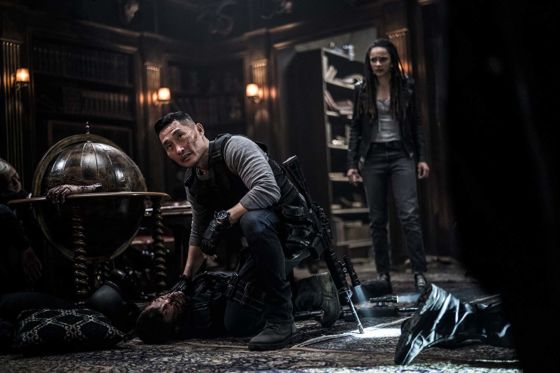 Cosby’s script sounds an awful lot like Kevin Smith’s 1994 Clerks, and not in a good way. Whereas Smith used backstory and dialogue to define his characters and to provide narrative thrust, Cosby uses these to tell his story instead of showing it to us. This script would’ve been fine if it had been a radio play; unfortunately, no one bothered to tell Cosby it was a movie he was writing. Repeated instances of “here’s what happened” and “do you remember” and “it all started when” can take you only so far before these many speeches and flashbacks hamper any chance of actually getting to know our characters. 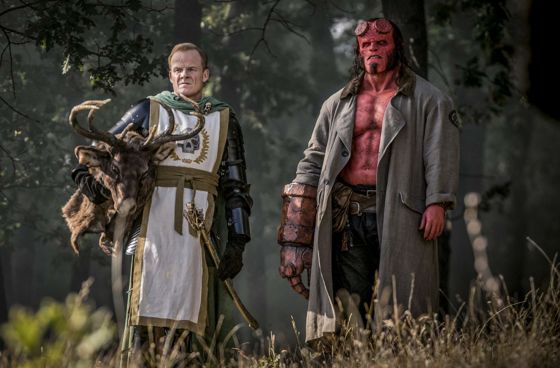 It also would have helped if Marshall had taken a little bit more subtlety from his wildly terrific first two films, Dog Soldiers and The Descent, or even the outstanding “Blackwater” episode from “Game of Thrones.” Here, we find him at his most ostentatious and obvious, shoveling graphic carnage onto the screen by the truckload just for the sake of doing so. There are no stakes here, as death is dealt with a dismissive, flippant attitude in an effort to pass the movie off as the next Deadpool. 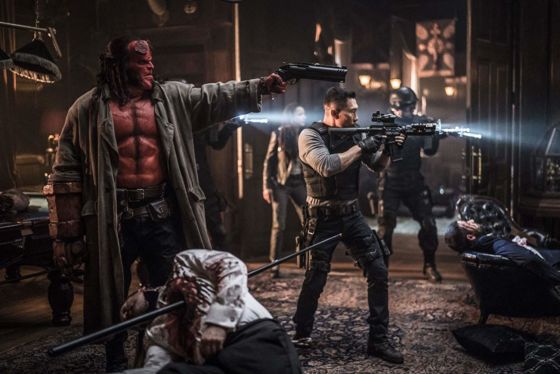 Visually, gore’s an easy time-filler, and it’ll play well to people who want to see blood and guts. However, when most of what we see are lingering shots of cleaved bodies, decapitations, and numerous unlucky bastards being dismembered and perforated, all sense of danger is lost. We’re only meant to hang on until the next tub of CGI goo splatters across our eyeballs, as the story and script are not enough to keep our attention. 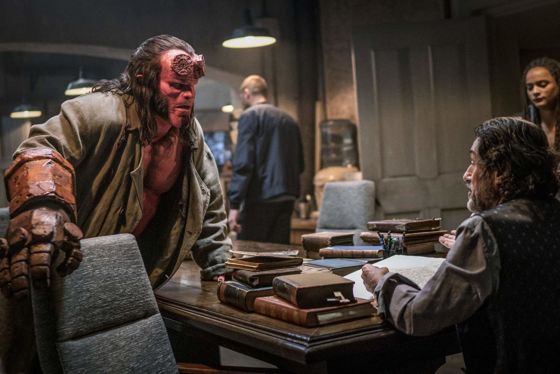 Story? What story? Something about Hellboy (David Harbour) being Nimue’s key to the end of the world? Whatever – it’s the same plot from a myriad of “Buffy the Vampire Slayer” episodes. His sidekicks – a woman whose life he saved when she was a child and an intelligence mope from M-11 (Daniel Dae Kim with a dodgy accent) – are only consequential when they need to be. They’re not fully integrated into Hellboy’s life, merely assigned as adornments until the BIG FINISH, offering no gripping insight into what makes Hellboy tick. 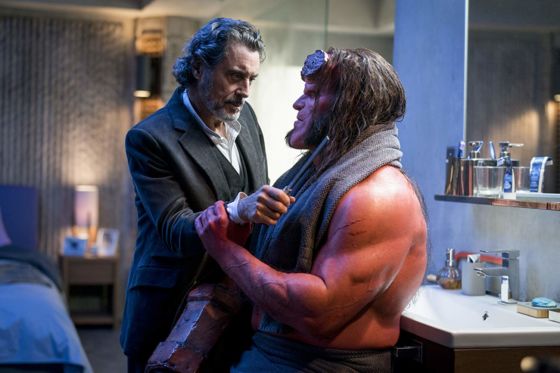 Harbour plays the titular character like a flannel-wearing, angst-filled teen from the ’90s, in touch with his feelings but burying them under bluster. The script doesn’t allow us enough of a sure handle on him, but it makes us like him, at least. There are two sides to Hellboy which put him at odds with how we’re to perceive him. The first is the person we see when his game face is on, staring down trouble with a quip just before he explodes with rage. Alternatively, he’s got a more sensitive side, evident in his loving interactions with Bruttenholm (whom he calls “Dad”) and his exchanges with his sort-of ward, Alice (Sasha Lane), his former child rescuee. Of course, as he’s played as a teenager, there’s not much time before the latter meets the former, his ire being directed at Bruttenholm after a pivotal encounter with Nimue. 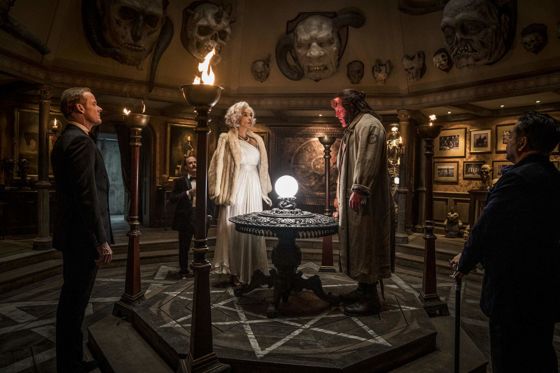 Hellboy feels totally uneven, as if there was one decent movie which had picture and sound locked and ready to go, but another movie was somehow spliced into it. This interloper also happened to take out any kind of momentum or depth, buried by the want to make this a hard-R film, especially with its gore and rough language. However, it’s more like the unrated cut of the PG-13 Live Free or Die Hard, with forced and unnecessary uses of the word “fuck” thrown in through post-production overdubbing. Rarely do you see the actors actually using this word; there are a lot of backs or heads turned when these epithets are delivered, and you can almost feel how badly this movie wants to be subversive. 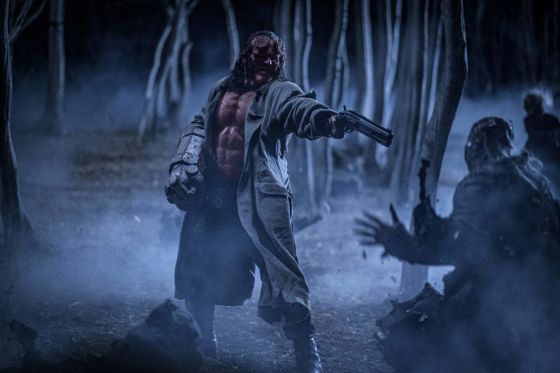 Moments of Marshall’s ingenuity with frights and suspense threaten to involve us in the proceedings – and wouldn’t that have been a nice thing – but they’re all too easily undone by another bedtime story attempting to fill us in right before things get smushed. Or smushy. Hellboy goes for broke but has nothing to show for it other than entrails by the dumpsterful. Thoughtfulness or cerebral qualities do not exist here; we are only to succumb to what Anchorman‘s Brick Tamland called “LOUD NOISES!” He also says at one point, “I DON’T KNOW WHAT WE’RE YELLING ABOUT!” – the same can be said for Hellboy. There’s a lot of pop and flash, but nary a soul underneath.

Hellboy tries way too hard to accomplish so little, its R-rating allowing excessive and unnecessary gore to hide its many shortcomings.