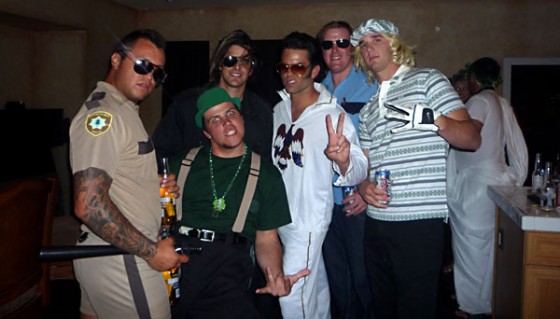 Halloween is almost upon us, and with it comes the time-honored tradition of dressing up like an idiot and getting hammered at a costume party. Since Halloween falls on a weekend this year, we assume (nay, expect) more drunken tomfoolery than usual. Don’t let us down.

However, if you’re going to a Halloween party this weekend, there are some thing you may want to consider if you want to avoid being “That Guy” and ruining the party for everyone else, or worse, eliminating any chance that anyone would ever have sex with you again. Ever.

This is important to remember. Yes, some Halloween parties will have loud music and some dancing, but you also have to consider that not all costumes were built with this in mind. Don’t go flailing around like a spastic monkey, hoping to impress all of the ladies with your “moves.” It’s not going to work.

You really have to use your best judgment when it comes to dancing at a Halloween party, or any party for that matter. Keep it to the spaces reserved for the actual dancing. If you’re at a bar, that’s one thing. They want you to dance there. Well, they do until they see how horrible you are at it, and that you’re not a hot girl wearing a skimpy costume. 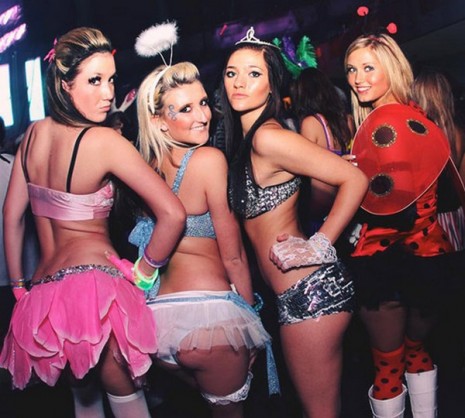 THEY are permitted to dance. You are not.

If you’re at a party in a friend’s apartment, odds are dancing isn’t going to be very high on the list of things people want to do. Just remember that when you’re twirling around in your Han Solo get up and knocking over lamps and drinks in the process.

This mainly only applies if your name is Daniel LaRusso, and you decide to abandon a chance to mug down with a hot blonde in favor of pissing off some bullies. Still, it’s sound advice.

In fairness, he really was asking for a beat down.

Don’t go playing Timmy Toughnuts at the party once you’ve had a few beers and you’re a little perturbed that someone totally ripped off your Zombie Robin Williams costume.

3) Think before you drink.

No one likes a drunken idiot, except to laugh at and draw Sharpie penises on after you’ve passed out in the corner. Moderation is the key on Halloween night, whether you’re talking candy or alcohol. Just because someone set up a “bob for apples” tub filled with vodka instead of water doesn’t mean you need to dunk your head in there five times an hour. Besides, that shit will sting your eyes, man.

Remember, too, that the drunker you get the louder and more obnoxious you get, and both of those things are a surefire way to scare off members of the opposite sex. No matter how awesome you look dressed up as the Dos Equis guy, it won’t change the fact that when you imbibe in a few too many bottles of your own product you’re still going to end up looking like an idiot when you piss yourself before the clock strikes midnight. 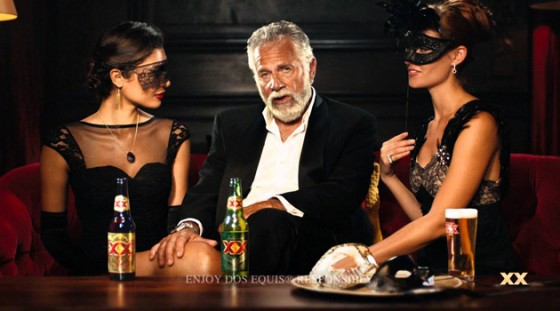 I don’t always piss myself, but when I do, it’s from too much Dos Equis.

2) No one thinks your puns are funny.

But no matter what kind of party you’re going to be attending, remember this one little fact: everyone has heard every single ridiculously cliché joke there is about Halloween, and no one thinks any of that crap is funny. Keep the “I’d Hall-HER-ween” jokes to yourself, don’t throw out random Great Pumpkin references, and don’t ask if there are any fun sized Snickers bars left.

I still watch it every year, shut-up

Speaking of which, if you’re going to be hosting a Halloween party and not just attending one, do your guests a favor and keep the front light off. This is for the sake of you and your guests, as well as the children out trick or treating. The last thing you want is your drunk buddy Cliff, in full cheerleader outfit, answering the door and scarring the neighborhood kids for life.

1) Think about your costume.

We didn’t think so. With all of the costume options out there, it’s amazing to us that people still wear shit like this: 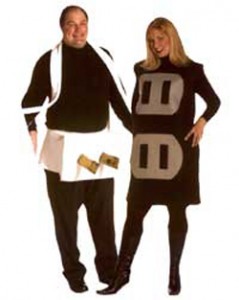 Apparently that guy hates having sex.

Keep it simple, stupid. Don’t be too topical, and try to be a little clever. Stumped as to what to wear? Don’t panic and buy something ridiculous like that little electrical outlet number. Go as The Dude, or one of your other favorite movie characters. Go as Don Draper. Just please, whatever you do, we’re begging you: never, under any circumstances, team up with a female friend to go as Kim and Kanye. If you do, we may have to pretend we don’t know you from now on. 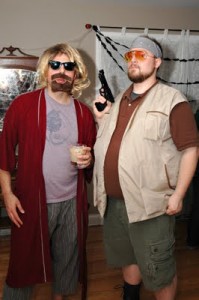 OK, so maybe it isn’t as cool as it sounded.

The most important thing here is to remember that a Halloween party is a damn good time, just as you follow along with these helpful guidelines. It can be as fun, or humiliating, as you make it. But remember, if someone has to make it super embarrassing and ruin the party, make sure it’s not you. And make sure you take lots and lots of pictures when that person makes a complete ass out of him or herself, because we’d love to see the evidence.