Humor > Lists > Avoid Being “That Guy” at Your Office Christmas Party 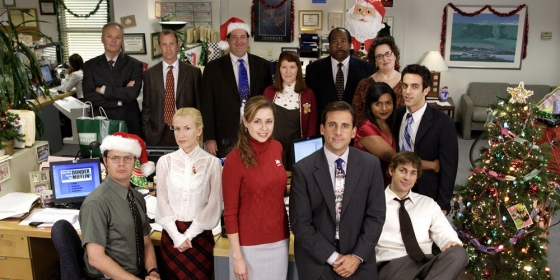 December is here, so we’re already into the 3rd month of Christmas. It’s once again time to celebrate the birth of Jesus by wearing tacky sweaters and waiting for a hairy fat guy in a red pimp suit to squeeze his ass down the chimney and give us lots of shit we don’t really need. And in the days leading up to Christmas, the gainfully employed will probably find themselves invited to the office Christmas party. Well if you do find yourself swilling wassail with the boss, here are some things you may want to avoid doing if you don’t want to be “that guy”…

5) No “Keep Christ in Christmas” Talk 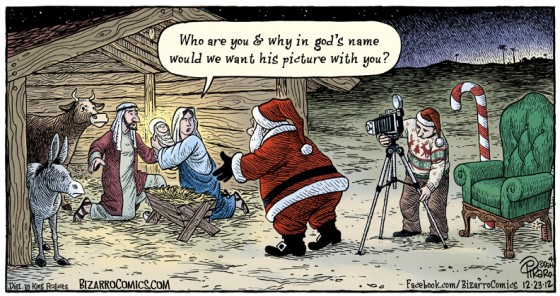 This is the guy who we talked about at Thanksgiving who just wants to tell you about how the pilgrims bummed the Indians out of their land, and then he wonders why no one wants to talk to him.

Well, that same guy will make sure to bring it up in every single conversation with anyone who will listen that, “Well, I enjoy the spirit of the holiday even if the meaning has been lost over the years. Now it’s all materialistic propaganda trying to make money for corporate America, and we’re ignoring what the holiday is truly about, Christ.” 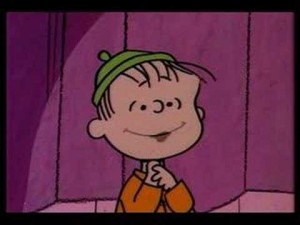 Oh give it a rest, Linus.

Yeah, it’s about shutting the hell up and enjoying some time off from work. Look pal, if you don’t like stuffing the pockets of those corporate fat cats who just want to sell you a Snuggie, that’s all well and good. But for the rest of us, we’re just damned happy that someone has finally come up with a way for us to read while also keeping warm, sweatshirts be damned. 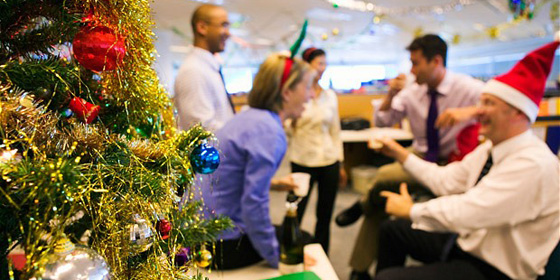 First of all, this will probably be a pretty redundant action, because any Christmas party worth attending will have booze flowing until late in the night. But even if you work at Alcoholics Anonymous or a pre-school, don’t be the guy who sneaks in a flask and dumps some peppermint schnapps into the eggnog in an attempt to get everyone to “loosen up and take the edge off.” 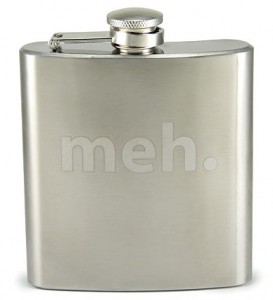 “I’ll just add in a little ‘Christmas spirit’…or should I say SPIRITS!? GEDDIT!?”

And why shouldn’t you do this? Because if you do, you’ll be forever cementing your reputation not just as That Guy, but as That Creepy Guy. And when that happens, every friendly smile at a coworker will be misconstrued as the uncomfortable leering of a deviant (that’s you) and you’ll be well on your way to a sexual harassment lawsuit. But hey, we hope it was worth it to get your boss slightly buzzed.

Look, everyone who participates in Secret Santa who is not named Michael Scott knows that the idea is to bring something lighthearted and, more importantly, cheap.

Sure, a bottle of wine will work in a pinch, but for the most part you’re going to find a lot of snow globes, paper weights and chocolate. And then there’s always the one funny guy who brings the “hilarious gift joke,” like a candy dispenser with the candy coming out of Santa’s ass. 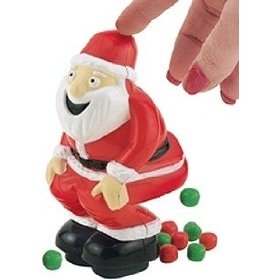 You thought we were making this up, didn’t you?

And when the sweet old lady who works down the hall opens that puppy, it’s going to be met with a mixture of forced laughter and horrified expressions, and you’ll be either too dense to realize what a mistake the gift was or you’ll scramble to make sure to keep the “secret” part of Secret Santa for as long as you can.

2) Stay away from the mistletoe 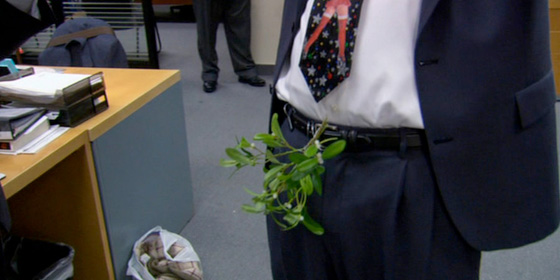 First of all, you’re among coworkers. It’s a party, but it’s still a professional setting. While it’s okay to get a little tipsy and have a few laughs, it’s important to remember that come Monday morning, you’re still going to have to look these people in the eyes. Their cold, judgmental eyes. And trust us; they’re not soon going to forget your Christmas party shenanigans.

And that’s why it’s in your best interest to just avoid the mistletoe altogether. God forbid you get caught under it with a coworker of the opposite sex by some annoying person wielding a camera (which should be strictly forbidden at these things, by the way). 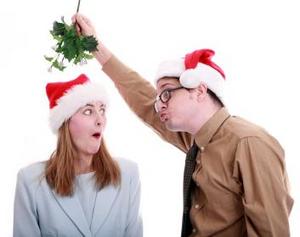 Nope, nothing awkward about this.

And for the love of God, whatever you do, do not be the guy who grabs the mistletoe and hangs it from his belt. Seriously, that’s even creepier than the guy who spikes the eggnog, and to make matters worse, you might be a little disconcerted when you find out exactly which of your coworkers wants to take you up on that time honored tradition. 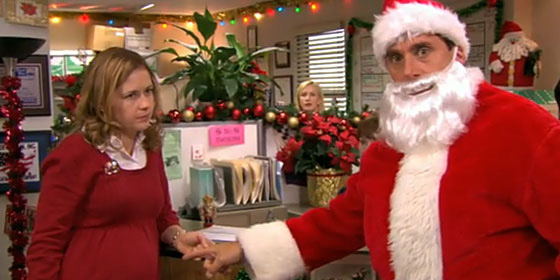 Hey, we get that you like to get into the spirit of Christmas. That’s why you play nothing but Christmas songs on your office computer’s iTunes every day after Thanksgiving. It’s also why you wear that horrific looking sweater with the snowflakes and reindeer three days a week once December rolls around.

But don’t be the guy who takes things a bit too far by showing up for the office Christmas party dressed like jolly old Saint Nick.

Once you do that, there’s a fair chance you’ll go around to every coworker asking them if they want to sit on your lap, or if they’ve been naughty or nice. Not only that, but if you dress up in full Father Christmas regalia, there’s always the chance you could end up looking like this guy after a little too much eggnog: 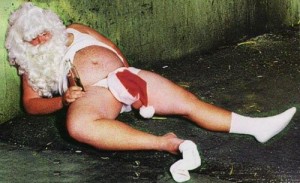 So about that raise you asked for…

On second thought, have at it. Every office Christmas party needs that one drunken asshole that acts like an idiot and gives people idiotic stories to cherish for years to come. Consider it your gift to them. Merry Christmas, coworkers!