Ever since the iconic X-Men Marvel superhero made his less-than-spectacular debut in 1974 in the pages of Incredible Hulk number 180, the man known as James Howlett, Patch, Logan, Weapon X, or simply Wolverine has become one of comic-doms lynch pins. The grizzled and age-old man is wild, often feral, brutal, angry, and a dedicated member of the granddaddy of all ‘X’ teams. Yet, without one dog-sized weasel known far and wide for its ferocity and relentless behavior, Hugh Jackman would still be wallowing in obscurity. 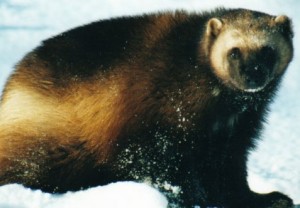 The Gulo gulo (Latin for glutton) is the the largest member of its Mustelidae Family and, according to Wikipedia: “The wolverine is, like most mustelids, remarkably strong for its size. It has been known to kill prey as large as moose. Armed with powerful jaws, sharp claws, and a thick hide, wolverines may defend kills against larger or more numerous predators. There is at least one published account of a 27-pound wolverine’s attempt to steal a kill from a black bear (adult males weigh 400 to 500 pounds). Unfortunately for the mustelid, the bear won what was ultimately a fatal contest. Wolverines have been known to harass and attempt to intimidate wolves and cougars.” Now that is a bad ass critter. Now, thanks entirely to this predators reputation, many things have been named after it aside from the beastly hero. As you watch the following videos, check out some other ‘Wolverines’.

The University of Michigan Wolverines:

Michigan has long had an unofficial nickname: “The Wolverine State.” However, evidence seems to show that if wolverines ever lived in Michigan, they would have been very rare, and, according to some reports, a few do live in the ‘thumb’ area as well as far north in the U.p. Some locals believe that Ohioans gave Michigan the nickname around 1835 during an argument over the ‘Toledo Strip’, a piece of land along the border between Ohio and Michigan. Rumors in Ohio at the time described Michiganians as being as vicious and ‘bloodthirsty as wolverines’ “. So, it stood to reason that the biggest school with the largest following would name their sports teams after the wicked mammal. The stripes on the helmet artistically follow the lines on the animal’s hide.

A specialized line of manly tools for manly jobs. “Wolverine Tools offer the professional contractor superior strength and quality that stands the test of time, eliminating replacement costs. Our standard and specialty tools are created using superior materials, such as chromoly steel, aircraft aluminum, pulltruded fiberglass, and ash or hickory hardwoods.” Like I said: Manly.

Boots that might be made for walkin’, but primarily for kickin’ ass and jotting down names: “Established in Rockford, Michigan, Wolverine made the original boots that helped build the railroads, erect skyscrapers, and expand highways across this great country. A historic mile marker for the brand took place in 1914, when Wolverine introduced a footwear line called the 1000 Mile Boot®, setting the standard for durable footwear.” Did I mention exceptionally pricey? Yeah. They are, too.

Wolverine Tractors and Equipment:
Got a ‘monster’ job that needs some heavy and metal machinery? Well, look no further: “Since 1943, when we first opened our doors, Wolverine Tractor has proudly served Michigan contractors. Our world and our industry have changed significantly since those first days. What has not changed is our commitment to treating every customer like our only customer.”

The Wolverine Liberation Army:
And this, right here, is just multiple levels of bizarre. This guy, and his fellow contributors, are almost scary in their love of all things ‘Wolverine’. You have to read this stuff to believe it. HERE too!

And Finally, Let’s Not Forget The Rallying War Cry From The Eighties: