Heroes In A Half-Shell: 25th Anniversary 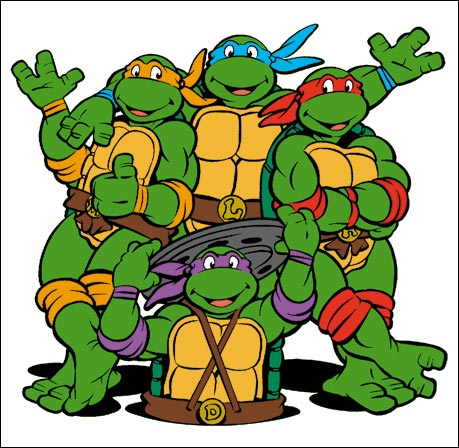 I’ve said it before and I’ll happily say it again: cartoons were and are a big part of my life, and one of the many I watched as a youth -or, at least as a younger adult- was definitely Teenage Mutant Ninja Turtles. Now believe it or not, those pizza-loving protectors of the city streets are celebrating their 25th Anniversary in a style that will make any hard-core fan, and turtle, shout ‘Cowabunga‘ with glee! Hitting store shelves on May 12th like a whipping nun-chuck is Season Seven of the mega-hit TV show from Lionsgate! Season Seven! Now that’s staying power, not to mention the fact that those wise-crackin’ terrapins have been around since 1984! So, what can you expect in this action-packed collection? Oh, it just gets infinitely cooler: Each beautifully boxed set (there’s 4 in all) comes stuffed to the gills with a DVD set of six complete episodes, loads of special features, and, the icing on the cake: a Mini-Classic Action Figure of each of the four turtles! Each set features one of our titular heroes on the box art, all of which can be combined to form a completely cool ‘Action Scene’, and includes his toy counterpart inside! For instance, here’s what the set contains: 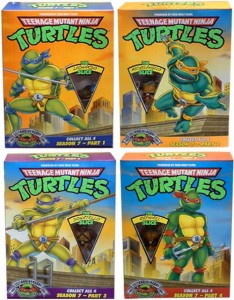 Michelangelo touts: “It’s radical! Get ready for more totally tubular Turtle excitement! Whether they’re battling monster sheep, sleuthing with Sherlock Holmes, or putting the freeze on a deadly heat ray, the Teenage Mutant Ninja Turtles take adventure to the max in these seven shredding episodes!” And in this particular set you get a mini of Mikey, episodes 7-13, and a Special Feature of “A Shellabration of the Turtles Creation”! You can’t ask for more than that, and yet, there’s three other comparable sets to choose from! Awesome!

Now, before you completely go bonkers waiting for next Tuesday, you really ought to stop by the TMNT Sound Boards and check out some classic Turtle sounds! Check out what Raphael, Michelangelo, Leonardo and Donatello have to say by simply going to Lionsgate.com and clicking on each character to listen to their most memorable phrases! The widget also gives you the option to check out the official TMNT anniversary site, purchase the DVD, watch the trailer, embed and share with friends – “that’s a fact, Jack!” Talk about reliving the good old days when this, the original set, aired on Saturday mornings and eventually afternoons! It’s nostalgia at its finest! Here’s a classic scene to jog your memory along with the memorable theme!

The Season Seven Episodes contained within are as follows:
Disc 1: Tower of Power, Rust Never Sleeps, A Real Snow Job, Venice on the Half Shell, Artless, The Last Queen of Atlantis
Disc 2: The Irish Jig is Up, Shredder’s New Sword, Ring of Fire, Turtles on the Orient Express, April Gets in Dutch, Northern Lights Out, Elementary My Dear Turtle
Disc 3: Convicts From Dimension X, The Starchild, The Legend of Koji, Night of the Dark Turtle, White Belt Black Heart, Attack of the Neutrinos, Escape From the Planet of the Turtleoids
Disc 4: Night of the Rogues, Revenge of the Fly, Dirk Savage: Mutant Hunter!, Combat Land, Atlantis Awakes, Invasion of the Krangazoids, Shredder Triumphant

We have one set of these fabulous DVDs to give away to a lucky Gunaxin reader. In order to be eligible to win, you must just do two easy steps :

For this amazing prize (retail value of $60), we will pick a winner at random from the eligible tweeters. COWABUNGA DUDE!