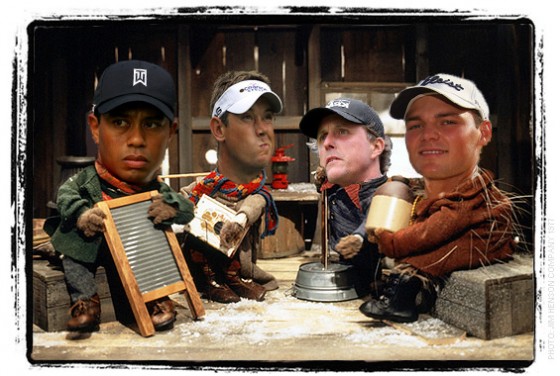 The PGA’s gettin’ the BAND back together!!!

That’s right… it’s January. You just got done watching two of the best NFL Conference Championships you’ll ever see and they were both played in frigid cold. Christmas isn’t that far out of memory and you may still be recovering from the loss of memory on New Year’s Eve. Most of us have seen snow and we are enduring the worst of winter as we speak.

Most don’t realize the PGA Tour touts one of the longest season schedules on the map, getting started in early January with stops in Hawaii and ending late in November in China (probably because the world’s best make so much money in sponsorship that they only need to venture out about 20 times or so during that 11-month marathon… another topic for another time).

This week the PGA Tour welcomes the arrival of Tiger Woods and Phil Mickelson, making their first starts at the Farmers Insurance Open, and while that may mark the start of any true golf season for most, this event is the fourth the Tour has hosted already this season.

We’re a month in… but don’t stress. We’ll help you catch up.

Here are five notes to get you up to speed on the world of golf and the PGA Tour’s 2011 season.

The European golfers are still European.

Hit up the latest set of World Golf Rankings and you’ll see four American names in the top ten. Four… Tiger, Steve Stricker, Phil Mickelson, and Jim Furyk (in that order). You’ll also find three from jolly ol’ England, a couple of Scots, a German and a South African.

Stretch to the top 20 and you find only two more Americans… Matt Kuchar and Dustin Johnson. You’ll add four more South Africans in that set, along with a couple of Italian brothers.

The game is not only global, but its dominated by international talent. The Americans are falling behind, and that leads to questions about the PGA Tour. Its tabbed as the top offering in the game, where the best of the best go to play. These days, the best of the best spend more time playing on links in Europe and Asia. Golfers from that side of the pond are vocal about their lack of desire to come swing on American soil these days… Lee Westwood and Rory McIlroy, two of the best, spend hours on Twitter dogging the P to the G to the A. They are taking a pass on membership, they are taking a pass on special rules instituted by the Tour specifically to entice them over (both telling all who will listen they will not be attending THE PLAYERS, one of the best non-major events of the season), and they are keeping their talents – and the money that talent brings to the game – in Europe.

Its another step in an evolution many have seen coming for some time. The game is global, the talent is global, and it may not be long before the PGA is global… whether they want it or not.

Tiger Woods is not the best golfer in the world… at least not today. 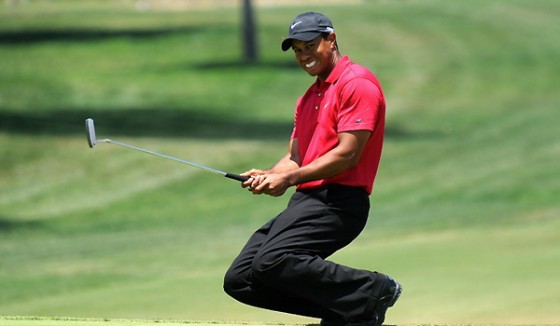 Last week the powers of golf, as we noted above, were playing in Europe. More to the point, they were playing in Abu Dhabi… and “the powers” included some of the best of the American set. The game’s elite descended to do battle in the Arab world and, in the end, America’s best fell… not just for the week, but for the world.

Martin Kaymer earned a win in Abu Dhabi, his fourth international win over his last eight starts. With that win, the math pushed Kaymer to the #2 spot in the World Golf Rankings, dropping Tiger to third… and until you put it in context, it’s hard to grasp just how surprising that is.

The World Golf Rankings are a cumulative system of measure, calculating data and performance over a long period of time. The metric process of tabulating those rankings includes years of performance and a long-term view of statistical measure that happens, in this case, to include times when Tiger was dominating the game. Tiger’s last win came at the Australian Masters in 2009. Not only has he failed to secure a victory over the last calendar year, but he’s struggled to compete at all… filing 15 total starts around the globe in 2010 and finding the top ten in only FIVE of those events.

Lee Westwood and Kaymer have used that time to catch up and others are starting to catch up as well. This is the closest the point standings have been since Tiger joined the professional circuit in 1996.

I’m not sure if that’s good, bad, or indifferent… but it’s reality.

The Official World Golf Rankings suggest Lee Westwood is the best golfer in the world. 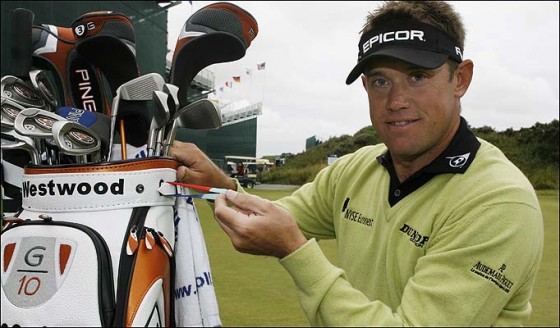 Show us your pearly… nevermind.

As we noted above, Westwood has endured a long journey to get here. He’s been one of the world’s best for several years but Tiger was so dominating that the math never gave Westwood (or any golfer for that matter) a legitmate shot at the title. Now he’s the world’s top-ranked golfer.

Here’s the thing… Bucky doesn’t win all that often. In 2010 he filed 20 international starts. Along the way he earned twelve top-ten finishes but only two brought in wins… and they weren’t at prominent events (the St. Jude Classic, a respectable PGA Tour event, and the Nedbank Golf Challenge, a spot hosted by the African Tour). He added two victories in 2009 as well – the Portugal Masters and the Dubai World Championship (both Euro Tour events).

There is no denying Westwood as one of the best in the game. There’s all kinds of room to debate if he is truly THE best.

He might be the world’s most consistent… if you want to crown his ass, then go ahead and crown him, ’cause for our money…

Martin Kaymer is the best golfer in the world. 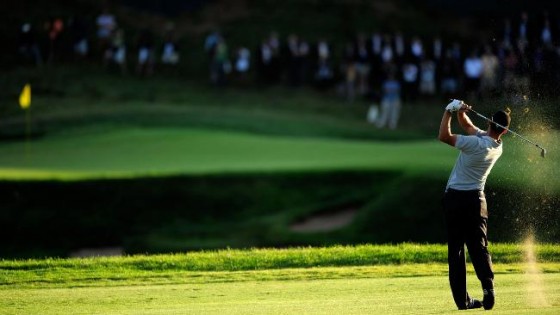 The best in the world today. Tomorrow… who knows (but probably him)?

While Kaymer was winning, in dominating fashion (beating the second-place golfer, Rory McIlroy, by eight strokes), in Abu Dhabi… Westwood was finishing T64.

As we noted above, that’s Kaymer’s fourth win in eight international starts. That span includes the final major of the 2010 PGA Tour season, the PGA Championship, and three additional victories against some of the best talent in the world.

Right now on Bodog you can find Kaymer listed with 14/1 odds to win any one of the four majors on the 2011 golf schedule. I have a hard time suggesting that is NOT the best gamble in sports today.

And Kaymer’s talent isn’t limited to the course…

Golf is once again a young man’s game… and they party.

The best young golfers in the world enjoy being the best young golfers in the world… and that’s the way it should be. For all of the questions about the stability of the PGA Tour, the lack of support from the game’s best golfers, the lack of respect for the American set shown by the talents of Europe, the failing economy and the fall of sponsorship dollars and corporate relationships that once stood as the foundation of professional golf… for all of the drama, we can count on this…

Young golfers will make a ton of dough and they will enjoy the tail that follows. For instance… 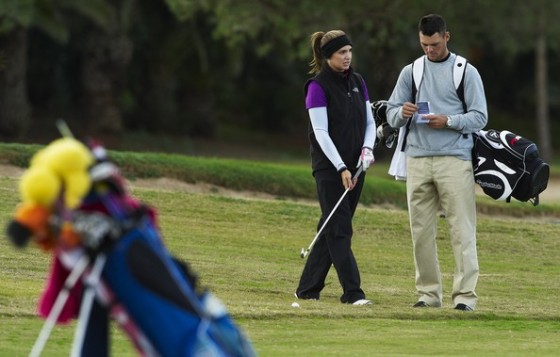 Kaymer toutin’ bag for his lady…

That’s Martin Kaymer. We think he’s the best golfer on the planet. He dates Alison Micheletti… not only is she fuckin’ gorgeous, but she aspires to make a few dollars in the golf game as well.

He enjoys hittin’ it so much, he takes time off to caddie for her… THAT is evolution, ladies. 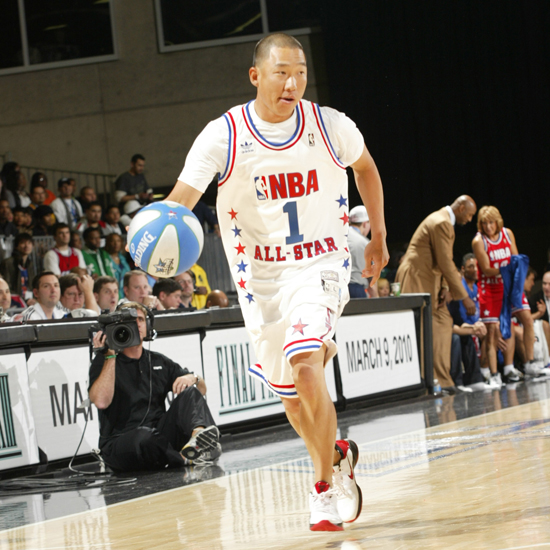 Drinkin’ and ballin’, ballin’ and drinkin’… play on playa.

Anthony Kim was once tabbed as the kid most likely to challenge Tiger Woods.

Now he’s tabbed as the kid most likely to challenge Las Vegas and lose. Kim has built a strong reputation as golf’s new bad boy, taking the reins from John Daly and spending long hours in the casinos, rubbing elbows with the stars of the NBA (a regular at the league’s celebrity throwdown at All-Star weekend), and doing whatever he can to insure his bladder suffers for all the money Nike is paying him.

The tabloids don’t spend much time attaching a girld to his arm, but its not that he’s not tapping ass… he’s not tapping famous ass. He’s a snipe hunter. He trolls the strip and they through in droves. That’s not news. 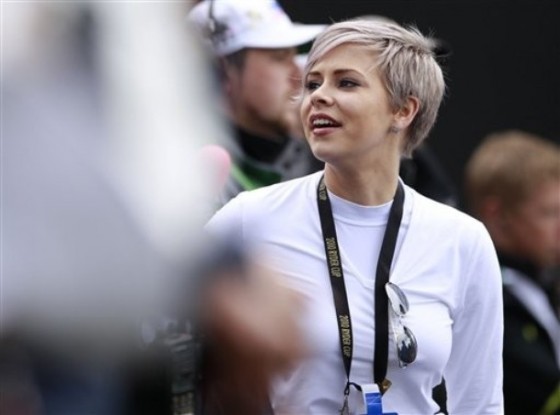 Holly Sweeney, waiting for Rory to get on tee.

(McIlroy and Sweeney have supposedly split, but I still want to bring it up and attach it to golf… he deserves credit. Cheers mate, and here’s to hoping it comes back around, for your sake and mine.)

And that brings us to Dustin Johnson. He dates fellow professional golfer Natalie Gulbis… 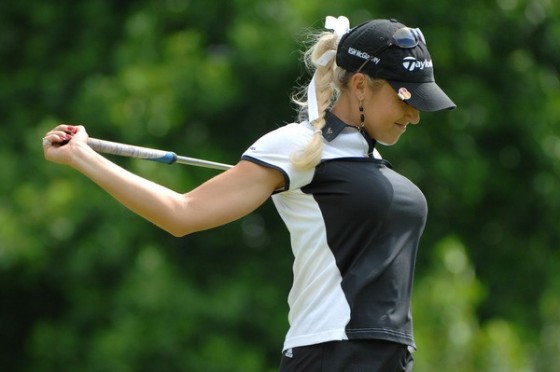 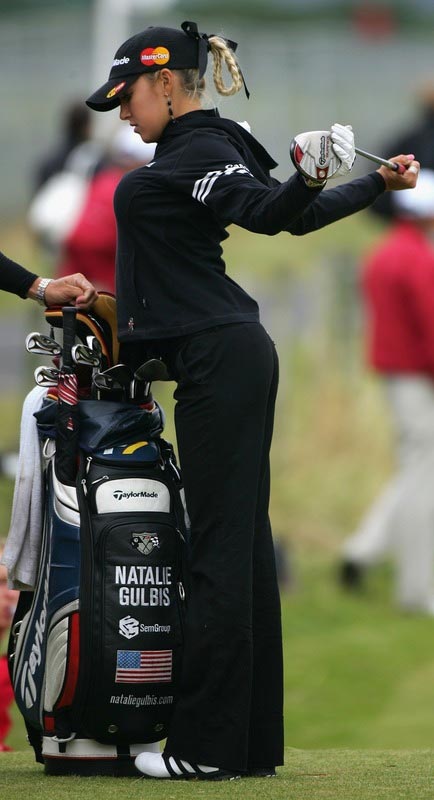 Yeah, she plays golf. DJ plays golf as well. These two made headlines to kick off the 2011 season when DJ, having played at the season-opening Tournament of Champions in Hawaii, had plans to play at the Sony Open when he suddenly filed for early withdrawal and was seen by reporters at the local airport.

Those same reporters got word of pics of DJ and Gulbis getting acquainted. One problem… DJ was dating Amanda Caulder, and Amanda was back in the states… unaware DJ and Gulbis were… well… I’ll let your imagination go from there. I could picture this girl doing just about anything and I’d be happy. 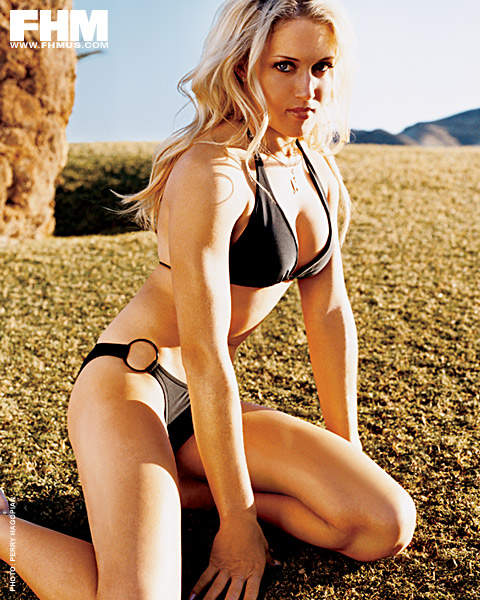 … that’s amazing, and that’s Dustin Johnson serving golf as well as any of the young set taking over the game in 2011. He’s one of many taking over the links, turning the PGA Tour and the world’s tabloids into their own personal showcase of talent.

Those young golfers were all over the map showing and proving in 2010 and with the work they are doing – both on and off the course – coming into 2011, you should be watching.