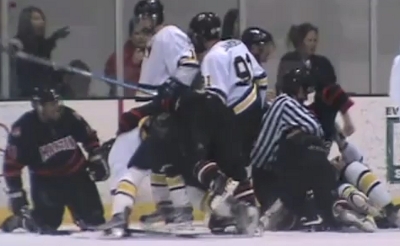 The NHL is known for handing out some pretty random, inconsistent punishments. A skater could receive a few game suspension for a questionable hit while a repeat offender might get off the hook entirely for a malicious shot to the head. Rarely do fans of the game at the NHL level hear or take notice of punishments at the youth level, but when the word “years” comes into play, everyone takes notice.

According to Fox Sports Southwest, two high school skaters in Texas received their punishment for their role in a brawl that took place on March 27th. The verdict, determined by the Texas Amateur Hockey Association, was that each skater was to be suspended from hockey for two to two and a half years.

In the modern days of smart phones and easy access to video sharing sites such as YouTube, incidents like this that would have typically been contained at the local level can easily expand to the national level. At the very least, players should be aware that their actions aren’t just being viewed by those in attendance, but could very well end up published on sites around the country – like this one.

While the quality is fairly poor, two videos capturing the latter moments of the brawl follow below.