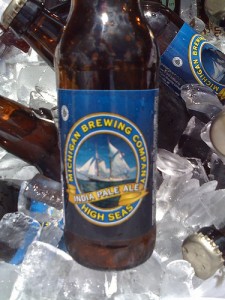 Information: (Site) “Our interpretation of a legendary style ale is not for the timid. Assertively hoppy and dangerously seductive. A skillful blend of three premium barley malts with generous amounts of Northern Brewer and Cascade Hops creates a special ale to satisfy even the most demanding palate.”

Just as last time, I’ll begin this particular review with a little information about the Beer style itself (From WIKI): “India Pale Ale, abbreviated IPA, is an ale that is light amber to copper in colour, medium to medium-high alcohol by volume, with hoppy, bitter and sometimes malty flavor. IPA is a style of beer that is usually included in the broader category of pale ale. It was first brewed in England in the 18th century.”

The hue is a rich amber color capped by a very prominent-medium head that stays afloat for quite a bit. Right away, one can easily identify this brew as the IPA it is (assuming it was without a label) since it’s immediate aroma is heavy with hoppiness and that bitter/floral/peppery nose that comes with the genre. There seems to be a light background of citrus as well; a slight, hidden grapefruit nose.

The first taste is indeed reminiscent of the IPA style: full of biting hops, lingering bitterness, and a pleasant peppery bite. The two major differences are, a) the taste owes its fruity body to an obvious rindy, citrus addition that -just as with the smell- tastes remarkably like grapefruit, and b) there is a fare bit more of the malt flavor that, though part of the IPA recipe at times, is sadly missing from so many others of the ilk. It seems to add something to the, often far-too-bitter taste, and is definitely a pleasant little something extra that specifically makes this selection that much better. This is very nice and a fine addition to anyone’s love of the IPA. Serve it with some queso at your next tail-gate party!

Rating: * * * *
Similar to other IPA’s, but just that much different with its addition of a heavier malty body.