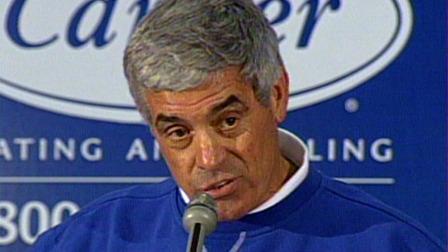 Sports are an exciting way to let loose from the real world and cheer on your favorite team, hoping that they bring home a victory. However, things don’t always go as planned. When something unexpected happens, it can be quite entertaining. There are many hilarious moments in sports, so we have narrowed it down to the eight of the funniest moments in sports history that will forever stick in our memories.

Randy Johnson managed to throw a fastball  95 mph, definitely an exciting moment for his team. However, there was someone out there whose day just turned to crap. A small bird that had been flying over the baseball field was hit by the ball, and although it sucked for the bird, this astonishing moment was quite hilarious.

One very memorable moment in sports history was when Joe Namath hit on Suzy Kolber. The man was drunk, which always adds to the hilarity. Many sports fans will never forget this moment as it was shown Live on ESPN.

3. They were who we thought they were!

After the Bears won a roller-coaster of a game, Cardinals head coach Denny Green was not so happy. His team had lost the game and he was livid. He went on an angry rant and exclaimed, "They were who we thought they were!" While the losing team may not have been so enthusiastic about this, it was a hilarious sight for Bears fans.

4. Someone Used Their Head

Normally, when a player hits a home run it just goes exits the field without being touched by anyone. However, outfielder Jose Canseco managed to give the opposing team a home run when the ball bounced off his head and over the gate!

After losing to the Dodgers, many Cubs fans were disappointed in the team and began to boo them. Manager Lee Elia didn't take this lightly, and began to say some very angry things towards the fans. He was fired at the end of the year.

Playoffs? This must be a joke! Sorry, Jim Mora, but it's actually not a joke. However, your exclamation at the fact definitely was! In fact, it even ended up in a Coor's Light commercial.

The National Anthem is sung before every sporting event, whether it be football or hockey. In a hockey game pitting the United States vs. Canada, the woman singing the National Anthem forgot the lyrics and skated off the ice. She came back to finish the song only to slip and fall, creating quite a memorable version of the time-honored song.

Bobby Knight threw dozens of tantrums during his career as a coach, but this one was the funniest of them all. He actually picked up a chair and threw it onto the court, which was quite a show for viewers.