When it comes to movie posters you have the bad ones, the strange foreign ones, (we’re looking at you Poland), the misleading ones and then on a completely different level of movie poster hell we have the posters presented here. Inspired by an acid trip these are movie posters that humanity should be embarrassed about. We have African hand-painted posters, Russian non-sense and the down-right stupid promotions. Enjoy and please wash your eyes after reading. 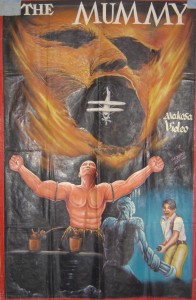 While we are no great fans of Brendan Fraser we don’t think he deserved being represented as the kid from Home Alone fighting a monster with a machine gun hand. Also we’re not sure if we should censor those loop-sided boobs on the mummy. Then again things could have been much worse–something like this: 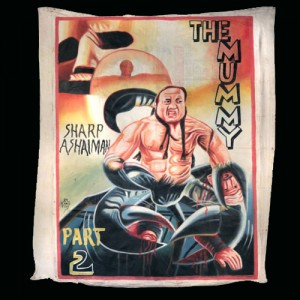 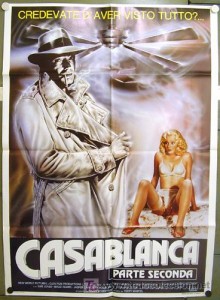 Our understanding of Italy is based completely on stereotypes, so we assume everyone over there rides scooters and says “Ciao” every two seconds. They apparently also love to see movies were Humphrey Bogart exposes himself to confused prostitutes. In order to confirm this, and potentially see some rare footage of Mr. Bogart’s junk, the Gunaxin investigation team flew to Italy where, after hilarious shenanigans, we found out that Casabalnca Parte Seconda is actually a completely different movie that has nothing to do with Casablanca, Humphrey Bogart or even sexy, confused women. In fact this movie is marketed in most of the world as a PG comedy called Jane and the Lost City. 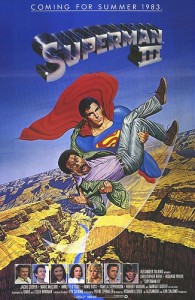 When it comes to designing posters there are a few basic rules:

Everything from Superman’s coy smile to the horrified expression on the man carried away just scream: “This movie is gayer than old school Batman and Robin!” Luckily, the movie producers tackled the issue by cramming a bunch of mug-shots of bored female office workers at the bottom of the poster, “see we have women in the movie as well.”

But could we make an even worse poster? Italy screams: YES WE CAN! 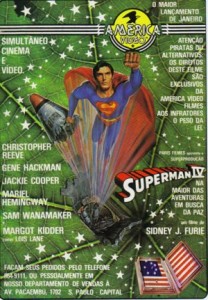 This is one of the most misinterpreted movies around, but we really like this Russian poster: 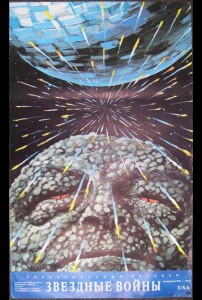 In a strange way this poster kinda makes sense we have the disco ball shooting a lizard man, which is more or less what happens in Star Wars. You know, if you remove all that part about Luke Skywalker and the Force and replaced it with a giant snake dude. Then again considering the muscles and epic nakedness on the original poster this is probably closer to the truth. 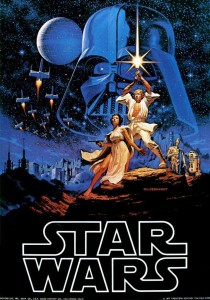 Just in case you need to remember what was NOT featured in the Star Wars movies: 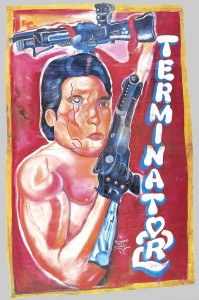 Is that a heart instead of an “o”? Is that a gun flying above Arnie’s head and is that even the Governator anymore? It looks like a one handed…you know what this poster has to be for a different movie, something about horrible nightmare creatures. Let’s look at some more flattering posters featuring Arnold. 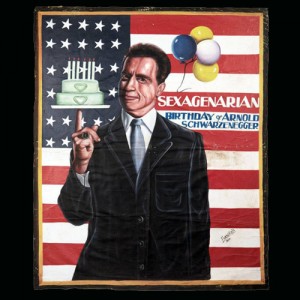 What the hell, is that actually movie or is someone in Africa really confused? Also is that supposed to be Arnold holding a cake with one finger? What the hell is going on?!

6) Planet of the Apes 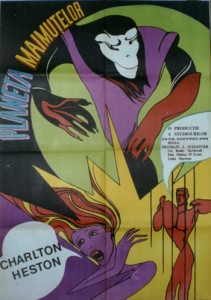 It turns out that in Romania showing a sci-fi movie about what makes us humans is not enough to get anyone interested. However, once you have an evil monkey scientist imprisoning Tarzan in a very peculiar Dali painting, you’re golden. The twisted woman screaming for Charton Heston just ads to the whole bizarre collage.

We particularly enjoy the sly look on the snake monkey as he looks at this veiny, malformed hand. 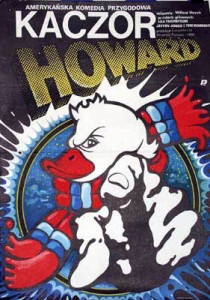 This is what Howard the duck actually looks like: 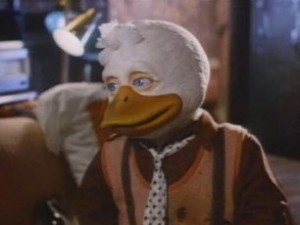 We rest our case. 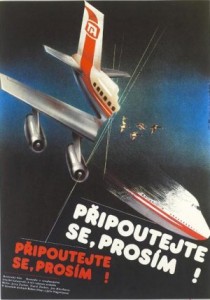 You know what’s hilarious? Apparently, planes suddenly splitting open and catapulting all the passengers into the void. Often considered a serious aerial accident, this is actually the best way to promote gag comedies featuring Leslie Nielsen. It’s the only way to convey the sense of tragic loss and depression you will feel when realizing that a movie you thought was hilarious when you were a kid, actually kinda sucks. 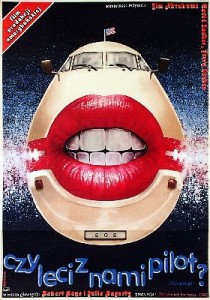 If the tragic accident didn’t sell this movie to you maybe a transsexual plane with human teeth will work better? Still not the right mix of disturbing images? Well don’t worry we saved the best for last. 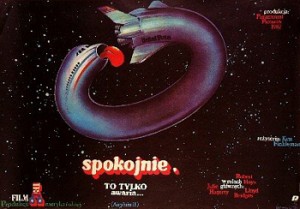 …and we have an airplane perform a rim-job on itself. Yep, tossing your own salad is the ultimate visual gag and the best way to sell a comedy about airplane travel.

We assume the next poster for Airplane will feature a giant goatse with a plane flying out of it. 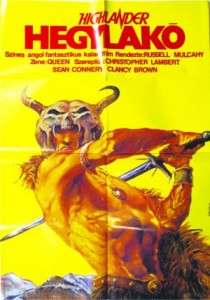 This Hungarian poster reminds us what the Highlander movie is all about: Vikings waving huge swords around. Wait, wasn’t this set in New York, with brief flashbacks to a medieval Sean Connery in long socks? 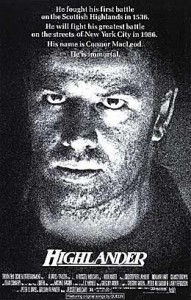 10) Cobra and other such Stallone goodness 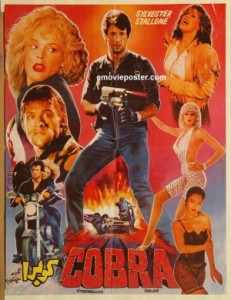 Many of you might not remember this priceless gem Stallone stared in around the time his career was rapidly disintegrating in flames. In this movie Stallone is a tough cop from the Zombie Police Squad, most remarkable for his ability to chew on a toothpick during the whole movie. Shit goes down and he single-handedly saves the world, and we do mean the entire world, from certain doom.

A pretty classic scenario for a Stallone movie best represented through an image of a mildly retarded, yet very happy Rambo shooting cheap looking prostitutes. We’re also promised that Sasquatch will make a cameo as one of the bad guys before Stallone escapes on his little motorcycle. Good times are had by everyone. 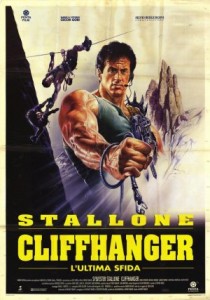 We have to admit it’s hard making a movie about rock climbing look exciting. While the sport is cool, watching someone else do it is pretty much like watching 2 hours of a man eating pie and telling you he won’t share. So all things considered, having the poster for Cliffhanger show Stallone flex like he’s about to punch a mountain is probably a good way to go. Promise that at some point there will be some Spider-man like shenanigans and you’re guaranteed success. In fact so many people confused this movie for a Rocky sequel that the whole thing became a blockbuster, despite being nominated for Worst Picture by the Raspberry awards and supposedly causing actual rock climbers to gauge their eyes out. 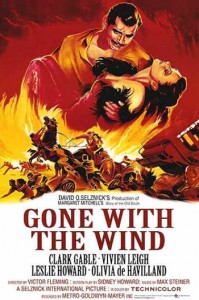 Maybe you heard your grandmother sigh about this movie and you thought she was just missing the days when racism was okay and women fell unconscious when touched by a man. Turns out your grandmother isn’t just a closeted slave driver, she’s also into watching vampire Clark Gable furrow his brow above a potential victim.

Then again, maybe the fiery action of high speed carriage chases was what really sold this movie. Based on this poster Gone with the Wind looks like the prequel to the Fast and the Furious movies. Watch Clark Gable do a sweet drift with a two horse power carriage while on-lookers flee in panic. 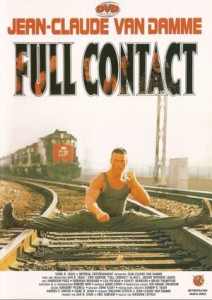 This poster does a wonderful job of resuming all of Van Dame’s acting career in one image. The man can, and will do the splits on anything, while looking slightly angry and very oiled up. Nobody even wonders why he’s in a train depot chilling on the tracks, presumably ready to punch an on-coming train. All that maters is that the man’s legs will do an 180 degree angle, and that’s enough of a freak show to get most people into the cinema.

For anyone interested in what exactly happens in the Full Contact movie all you need to know is that Van Dame bare-knuckle boxes with some dudes for hazy reasons that involves honor and a lot of money. Despite all odds he wins and lives happily ever after. No trains are featured.

13) Indiana Jones and the Temple of Doom 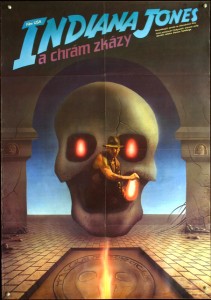 For some reason Eastern Europeans really, really hate Indiana Jones. In fact the easiest way to get them to watch your movie is by promising that Dr. Jones will get eaten by a floating skull, while holding a glowing butt-plug. Which according to this poster is exactly the plot of Indiana Jones and the Temple of Doom, you know, that Indiana Jones movie that doesn’t have a giant floating skull in it, yeah that one.