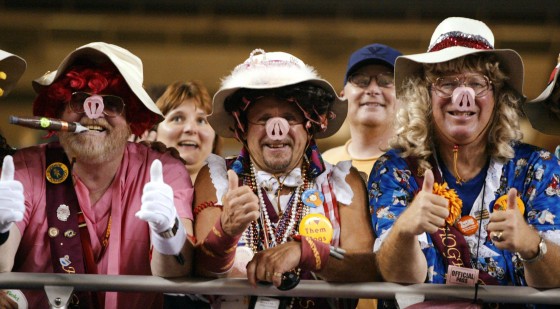 They got their name from the nickname that Coach Bugel gave to his offensive line, The Hogs. These men began showing up to Redskins’ games wearing plastic hog snouts, extremely out of fashion dresses, hats and more. Think Milton Berle meets sports mascot.

Adored by Redskins fans around the world, these guys went from being simply fans to providing charity work with their new-found Semi-celebrity status. From their Wikipedia entry:

The Hogettes have been organizing and attending charitable events in the Washington, D.C., area for over twenty years. In that time, they have helped raise more than US$100 million for various charities, including Children’s Miracle Network, Ronald McDonald House, and March of Dimes. Upon reaching this landmark value, Howard “Howiette” Churchill remarked, “That’s a lot of money for a bunch of fat old grandpas in pig noses and dresses.” Among these events are golf tournaments, including the Hogette’s annual charity golf tournament, walk-a-thons, truck rallies, galas, and other charity benefits.

Simply amazing really. Everyone always thought these guys were just a bunch of cross-dressing sadists who insisted on supporting Dan Snyder’s fantasy football team. That was simply not the case.

Announced today by group leader “Boss Hogette” via their website their retirement statement reads as follows:

After 30 seasons, the Hogettes® are hanging up our pig snouts & dresses. It has been an honor being a part of the greatest 12th Man fans in the NFL. We will forever be Redskins’ fans and cheer for our beloved team. It is a new era and we will continue to support RG3 and his teammates. HAIL TO THE REDSKINS!!! We will also continue to help (incognito) raise money for Children’s Charities.