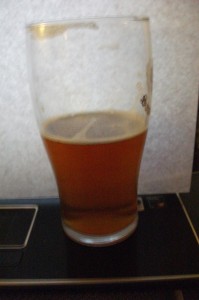 Information: For in depth info including a melange of images, check out their Facebook Site.

Here we have yet another selection from the up and coming home brew exploits of the P’s Family Brewing (soon to have a logo designed by yours truly) in the form of a witbier. What exactly is a witbier? Let’s let Wikipedia make a far more concise description than I ever could:

Wheat beer is a beer that is brewed with a large proportion of wheat. Wheat beers often also contain a significant proportion of malted barley. Wheat beers are usually top-fermented (as required by law in Germany). The flavor of wheat beers varies considerably, depending upon the specific style. Two common varieties of wheat beer are witbier (Dutch – “white beer”) based on the Belgian tradition of using flavorings such as coriander and orange peel which was revived by Pierre Celis at Hoegaarden, and weissbier (German – “white beer”) based on the German tradition of mixing at least 50% wheat to barley malt to make a light coloured top-fermenting beer.

First of all, the most noticeable thing is the rich, thick, enormous head. It piles on itself vivaciously just as nicely as it coalesces. The nose is ripe with coriander and fresh mown lawn as well as a hint of citrus rind. It’s odoriferously floral and almost tilted toward hay rather than wheat, but the smell is there: damp winter wheat billowing in the breeze. After the pour there is a noticeable collection of silt left in the bottle, so it’s best to leave just enough beer to keep it where it belongs.

The hue is crisp golden tan, not unlike the spring wheat it’s named for. As I write that last line, the head has laced to nearly nothing leaving behind a few tell-tale signs of its existence. It begins with a biscuity spice on the tongue. It’s buttery, and very clean. The coriander tang is right up front, just as it rolls into its second act featuring orange rind and damp hay. The finish is juicy, not at all dry, but it makes you want to have another sip regardless. It is fully and completely a witbier, very reminiscent of a Bell’s Oberon. Very tasty and easily matched with strong cheeses.

Rating: * * * *
Another fine selection from the up and coming P’s Family Brewing