Media > Movies > Hollywood is Officially Out of Ideas

Hollywood is Officially Out of Ideas

Having recently run out of every single other idea known to man and recycled even the most ridiculous and absurd plots ever put on screen, Hollywood has apparently gotten desperate.  The big wigs in Tinsel town, who we picture wearing expensive white suits and chomping on cigars (not unlike Al Capone or Kingpin), have decided that idiotic remakes aren’t just for classic guy movies anymore. 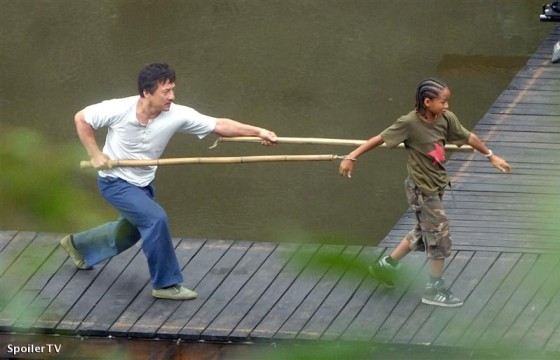 That’s why in addition to the forthcoming Karate Kid, Red Dawn and Nightmare on Elm Street remakes coming out in the near future, someone has decided it’d be a good idea to modernize Footloose.  Yes, the one where Kevin Bacon does an angry dance around an abandoned warehouse in one of the most unintentionally hilarious sequences ever put on film:

Sure, it’s easy enough to remake a classic scene like that.  Hell, Flight of the Conchords has already done it exceptionally well:

But we’d like to know how the filmmakers plan on remaking another gem of a sequence.  We’re talking, of course, about the famous Dueling Tractors of Doom scene. 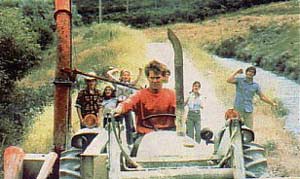 To set things up in about 50 words, in case you’ve been living under a rock and unfamiliar with the movie, Kevin Bacon likes to shake his moneymaker, and much to his chagrin he moves to a town where dancing has been outlawed by the evil John Lithgow, because some kids died once.  Makes sense to us.  Not content to let that stop him from boogeying down, Bacon for some reason or another ends up in this rather bizarre showdown with Lithgow’s bitchy daughter’s boyfriend.

Unlike in the olden days when one would simply throw down a gauntlet and maybe duel like men (with chainsaws), Bacon and the generic 80’s villainous teen go another way with the whole fight thing.  They hop on a couple of John Deere’s and decide to play chicken.  Let’s watch!

And by magnificent, we of course mean “oh my God that is the most ridiculous thing we have ever seen.”  During this extremely tense scene, you’ll notice a few things that elevate this from goofy to just plain redonkulous.

First, look at the people involved.  That one should be pretty obvious.  Second, did you hear that sweet “inspirational” music playing?  If you notice, the people accompanying our “hero” actually slapped a cassette into an old tape player plopped that bad boy down on Bacon’s tractor.  If Bacon didn’t know before that Sarah Jessica Parker and Chris Penn were holding out for a hero, he sure as shit did after that little maneuver.

But perhaps the best part of this entire sequence is that Bacon proves that he is in no way, shape or form a hero.  He actually tries to bail from the tractor, and would have succeeded in losing the showdown in exceptionally humiliating fashion if not for one little thing: his shoelace got caught.  He was so not a hero that he was actually thwarted in his attempt at wussing out by what amounts to, basically, a piece of string.

Apparently they’ll have to hold out for a hero just a little bit longer.

The bottom line here, though, is that Hollywood has truly, once and for all, run out of ideas.  There has been talk of a new version of Teen Wolf on the way, too, with Zac Efron in talks to take on the Michael J. Fox role.  While we despise Efron for his repeated attempts at destroying heterosexuality, this might be the one movie remake we can actually get behind, but only on one condition: they bring back Jerry Levine as Stiles. 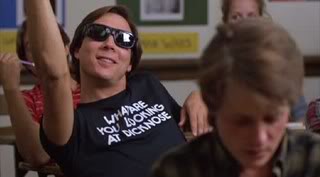 It's not like he's got anything better to do.