Hollywood’s Top Up and Coming Actresses

Always looking for the next big thing? As a society we seem obsessed with finding the next phenom, whether it be in sports, politics, or in this case movies. The following ten actresses are trying to become that next big thing, the next “it” girl. Unless you’re a hardcore movie fan, you probably don’t recognize all the names on this list. That’s okay, although I’m sure these ladies hope you recognize them. But you probably recognize at least some names, and that’s a start. If these ladies keep up where they’re headed, more and more people will know them. Keep an eye out for all these actresses in the coming years, maybe they’ll become household names.

Don’t see a name on this list that you think belongs? Don’t fret, this is an extension of our Actresses of Hollywood series. Check out our Top 10 Young Actresses of Hollywood list, you may find your favorite actress already there. For example, Evan Rachel Wood is an up an coming actress for sure. But she made our Top Young Actresses of Hollywood list, which is more prestigious, so we didn’t include her again. This article is meant to highlight those that couldn’t crack our previous top ten. And remember, we’re talking movie actresses here. There are plenty of talented young actresses, but if they’re not concentrating on films, it’s hard to include them.

So here’s our Top Ten Up and Coming Actresses of Hollywood:

She rose to fame as a model and by simply being Jude Law’s girlfriend. However, Miller is now making waves for her work on the screen. Critics took note of her breakthrough role portraying 1960s socialite Edie Sedgwick in the film Factory Girl. As a result, she’s begun to get more mainstream roles. I admit that her name is more recognizable that most on this list, but she cracks the top 10 because her fame is now because of her movies, not for actions off the screen.

First Major Hollywood Role: Alfie, where she plays Nikki, one of Jude Law’s many girlfriends.

Movie You Shouldn’t Miss: Layer Cake or Stardust, it’s a toss up. Laker Cake is a fantastic crime drama starring Daniel Craig before he became Bond. Stardust is this decade’s equivalent to The Princess Bride.

Upcoming Feature: G.I. Joe: Rise of Cobra, where she will play the Baroness in the 2009 summer blockbuster.

This Brazilian sensation was born into acting, as both her mother, Ana Braga, and aunt, Sônia Braga, are actresses. She would accompany her relatives on set and soon started her own career by appearing in commercials.  As a teenager she moved over towards television and movies, where she has received critical acclaim and won awards in her native country. Now appearing in English speaking films, Braga looks like another international sensation.

First Major Hollywood Role: I am Legend, where she plays Anna in the Will Smith thriller about a deadly plague wiping out the Earth’s population.

Movie You Shouldn’t Miss: City of God, the Brazilian crime drama is truly one of the best movies ever made, concerning two boys growing up in a violent neighborhood of Rio de Janeiro.

Upcoming Feature: Crossing Over, an ensemble about immigrants struggling to achieve legal status in the United States. 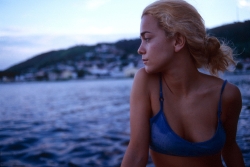 Dubbed by some as the “Scream Queen” due to a few horror pics under her belt, including Quentin Tarantino’s Death Proof, this 23 year old North Carolina native has already started to branch out to other genres with her appearance as Bruce Willis’ daughter in Live Free or Die Hard and her dramatic turn in Factory Girl. Winstead fell into acting after initially seeking a career as a ballerina.

Movie You Shouldn’t Miss: Bobby, the ensemble drama about the assassination of Robert Kennedy.

Upcoming Feature: Scott Pilgrim vs. The World, where she will co-star opposite Michael Cera in the forthcoming comic book adaptation.

This 25 year old has ties to two NFL franchises. She’s the great-granddaughter of New York Giants founder Tim Mara, the granddaughter of late Giants owner Wellington Mara, as well as the great-granddaughter of Pittsburgh Steelers founder Art Rooney. Mara’s uncle is John Mara, the president and CEO of the Giants, and her father is the vice president of player evaluation. So she’s pretty well connected. And she’s such a football fan that she added to her contract that if the Giants or Steelers go to the Super Bowl, she can attend.

Movie You Shouldn’t Miss: Transsiberian, a methodical thriller concerning two Americans on a Trans-Siberian train journey who encounter a mysterious pair that leads them down a path of deception and murder. For more mainstream fare, also checkout the Mark Wahlberg action flick, Shooter.

Upcoming Feature: Open Road, the Justin Timberlake vehicle concerning the adult son of a baseball legend who, together with his girlfriend, embarks on a road trip with his estranged father.

At 30, this Swedish-born Canadian is the oldest actress on this list. She began her career in modeling, before turning to the silver screen in recent years. But even with a late start, she’s made a fast climb up the rungs of Hollywood. She’s appeared in a few comedies and has begun to branch out to to other genres.

Upcoming Feature: The Watchmen, director Zack Snyder’s follow-up to his mega-hit 300, it is based on a group of costumed superheros who investigate a murder of one of their own. For a trailer, click here.

She’s recently appeared in a pair of comedies, The House Bunny and Nick and Nora’s Infinite Play List, and has made her mark in a number of male-oriented comedies over the last few years. The 22 year old got her start in commercials as a child, and first appeared on television in 2000 with a role on HBO’s Sex and the City. And a bonus, she has her own blog.

First known as Lilly Kane on the cult hit TV series Veronica Mars, she currently stars in the multiple wives drama Big Love on HBO. Still only 22, Seyfried has branched out into movies and seems destined for bigger and bigger projects. She starting modeling at age 11 and first appeared on TV at age 15, so it’s been a long road to get where she is.

First Major Hollywood Role: Mean Girls, as Karen Smith, one of the three “plastics” (the A-list girl clique) along with Rachel McAdams and Lacey Chabert in the teen comedy.

Movie You Shouldn’t Miss: Mamma Mia!, the ABBA musical adapted to the big screen where Seyfried plays Sophie Sheridan. But don’t overlook Alpha Dog, a surprisingly compelling film based on the true story of a bunch of wanna-be gangsters.

Best known for her roles on television, including providing the voice of Meg Griffin on the Family Guy, this 25 years old Ukraine-born actress has made the transition over to feature films. She first appeared at a young age in print-ads, catalog, and TV commercials for children’s product, before debuting on television in an episode of the popular soap opera Days of our Lives. Now that she’s conquered television, movies are her next medium of choice.

Movie You Shouldn’t Miss: Max Payne, in her role as Mona Sax. It basically win by default. Forgetting Sarah Marshall is better, but its been mentioned and I don’t want to reuse it. Max Payne is better than the forgettable direct to video American Psycho sequel and her other assorted smaller roles.

Upcoming Feature: Extract, from Mike Judge the creator of Office Space, she stars along side Ben Affleck and Jason Bateman in the comedy.

This 26 year old Aussie is already well known Down Under, but is just starting to make a name for herself in the United States and abroad. Her first Hollywood project was only two years ago, but people are recognizing why Cornish has won several major acting awards in Australia and has been compared favorably to Nicole Kidman.

Movie You Shouldn’t Miss: Somersault, the Aussie film starring Cornish as Heidi, a young girl on a journey of self-discovery.

This 18 year old started acting at the age of eight, and had appeared in her first major movie by age twelve. She’s combined critically acclaimed independent roles with the occasional kid oriented film like Zathura. By accomplishing so much at such a young age, she looks primed for a big career, much like her former co-star (and possible clone) Jodie Foster. Saying her future looks extremely bright probably doesn’t do her justice. She’s going to be a superstar.

Movie You Shouldn’t Miss: Into the Wild, based on the true story of Christopher McCandless, it deals with a young well-off graduate who abandons his possessions, gives his entire $24,000 savings account to charity, and hitchhikes to Alaska to live in the wilderness.