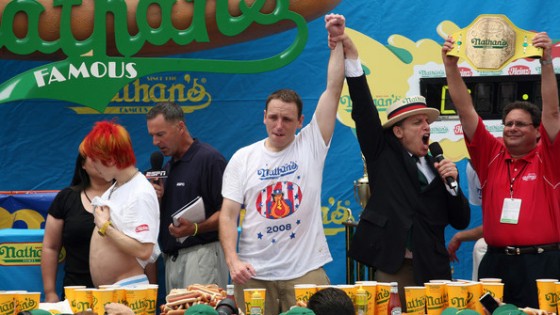 ESPN began broadcasting the Nathan’s Hot Dog Eating Contest in 2004, which I guess turned it into a sport, like poker, the spelling bee, and softball. At the time that competitive eating came into the consciousness of most Americans, Takeru “Tsunami” Kobayashi of Japan was the dominate force in the sport. He has won the premier event in Coney Island 6 times, often in dominating fashion. However in 2007, a new champion was crowned. The title of Hot Dog Eating Champion now rests where it rightfully belongs, in the United States. 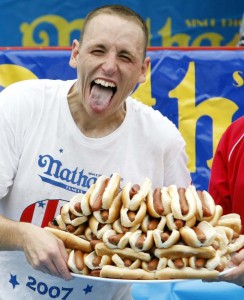 Joey “Jaws” Chestnut is an American competitive eater currently ranked first in the world by the International Federation of Competitive Eating. On July 4, 2007, he won the 92nd Annual Nathan’s Hot Dog Eating Contest, beating six-time defending champion Takeru “Tsunami” Kobayashi by consuming 66 hot dogs and buns in 12 minutes, which set a new world record. On July 4, 2008, he successfully defended his title by winning a 5 hot dog eat-off after tying Kobayashi in consuming 59 hot dogs and buns in 10 minutes. On July 4, 2009 he again prevailed by setting a new record of 68 hot dogs and buns in 10 minutes. Kobayashi was second with 64½. In 2010 he again defended his title with 54 dogs, although Kobayashi was not permitted to compete, and was actually arrested at the event.

So now Joey is the big star of competitive eating, and has won 6 straight Nathan’s titles, exactly the same amount that Kobayashi won. Assuming he is victorious again today, he’ll become the career leader in Hot Dog championships. The only man in the world who has a chance to beat him, Takeru Kobayashi, will once again not be competing officially in the 2013 Hot Dog Eating Contest because of negotiation issues with Major League Eating.

This makes Chestnut the clear favorite in the event, so make sure you take some time out of your schedule on July 4th to tune into ESPN at 1pm. Root for an American as he goes for his sixth title in a row, in an event that has become a part of Independence Day tradition across the country.