Sports > Football > How Are You STILL An NFL Head Coach!?

How Are You STILL An NFL Head Coach!? 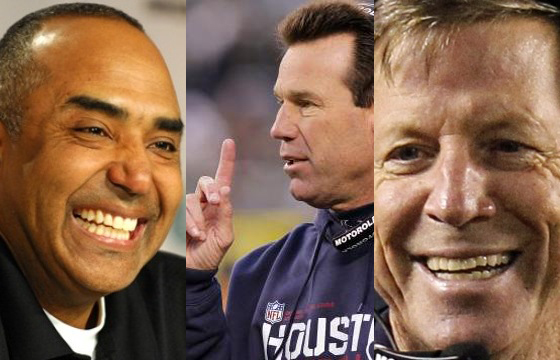 Feeling the pain of this recession? Strapped for cash now that the holidays have come to a close and the bills are coming in the mail? Then like me, you too are likely a bit perplexed about several NFL head coaches that have retained employment despite some (to put it mildly) shitty performances during the 2010 season. In some cases these men in charge have been mediocre at best for the better part of the last two or even three seasons. You or I couldn’t go to work and produce below average results yet still expect a weekly paycheck…

Why can these men authoritatively roaming the sidelines of nearby NFL stadiums?

Let’s examine these failures case by case and attempt to find an explanation for the inexplicable. 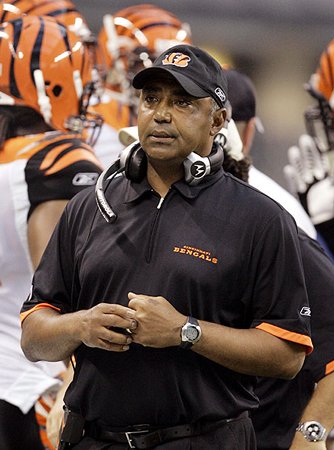 MARVIN LEWIS – Seriously, he still coaches the Bengals? I thought the TOchoshow was the governing body of that trainwreck in Cincinnati. Lewis was inexplicably handed a contract extension to continue on and watch this team perpetuate a losing culture with prima dona attitudes abound. In his eight years with the team Lewis has led Cincy to just two winning seasons, but more often than not the Bengals have been selecting in the top ten of the NFL Draft. After a 4-12 mark in 2010, that will again be the case as the Bengals are slated to pick fourth overall in the upcoming draft and could be in the market for a new quarterback. Lewis categorically denies the fact anyone not named Carson Palmer will be starting for the team in the near future, but those things have a funny way of changing as time moves along. 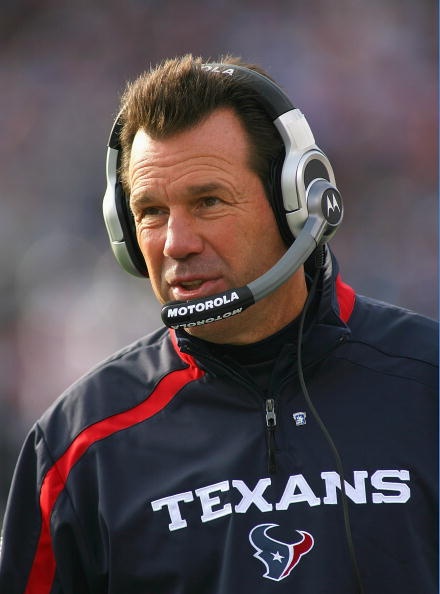 GARY KUBIAK – His Texans had been picked by the analysts as the sleeper team over the last handful of years to finally make a move in the AFC South, but apparently they slept through the alarm. Despite having the league’s leading rusher in Arian Foster and a top five passer in Matt Schaub, Houston’s 32nd-ranked (yeah, out of 32 teams) pass defense doomed this team to failure. Kubiak is an offensive mind and sure, putting points on the board may get fannies in the seats, but it seemed like the Texans actually had higher ambitions than that. With the team reaffirming its confidence in him to get the job done, apparently the Texans organization has hit the ‘snooze’ button one more time. 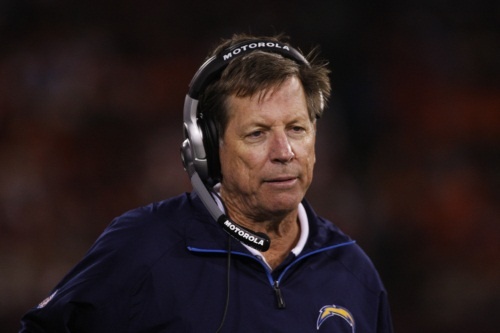 NORV TURNER – All this joke has managed to do is take a team billed as one of the league’s most talented over the past half a decade and turn them into a middle of the road squad fighting for their playoff lives on a yearly basis. San Diego again stumbled out of the gates with a notoriously sloppy 2-5 start to their 2010 season before rebounding a bit too late for a 9-7 mark. The lack of preparation has been evident in Turner-led teams in every head coaching stop the man has had. Why would anyone expect a different result here? It would be tough for Turner to motivate a vagrant to pick up a greenback let alone inspire a group of 53 men to go win a football game. He’s not exactly the most inspiring individual you see. Just go back to being an offensive coordinator already, Norval. What the hell kind of name is that anyway? 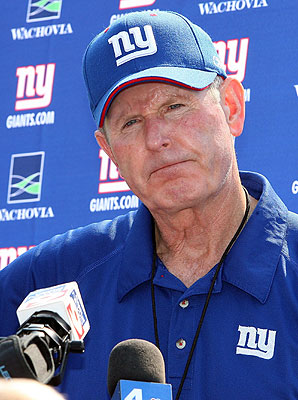 TOM COUGHLIN – Okay, so maybe he did tell the punter to kick the ball out of bounds and not directly to the most dangerous man in football in the Philadelphia Eagles’ return man DeSean Jackson, but that doesn’t excuse his club’s epic collapse this past year. That was just another one to add to the collection of disappointments. However, as the G-men have made a habit out of late season debacles in recent memory, Coughlin is still living off of his team’s unforgettable upset of the one-defeated New England Patriots following the 2007 season and the luster of that Lombardi Trophy has to start wearing off sooner or later. 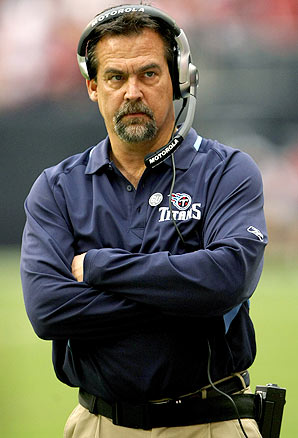 JEFF FISHER – It’s really difficult to put the longest tenured coach in the league on a list like this, but his monumentally-horrific handling of the Vince Young saga combined with the team spinning its wheels in recent years lessens the blow. Determining Fisher’s true ability as a coach is almost as tough as predicting whether he will have a beard this week or simply the classic salt and pepper Super Mario Bros. mustache that we’ve all grown accustomed to. Fisher is truly a renaissance man calling upon the aged Kerry Collins to lead his club at some point during each of the last three seasons, but having an over-the-hill quarterback under center isn’t exactly a recipe for long-term success, eh Brad Childress? 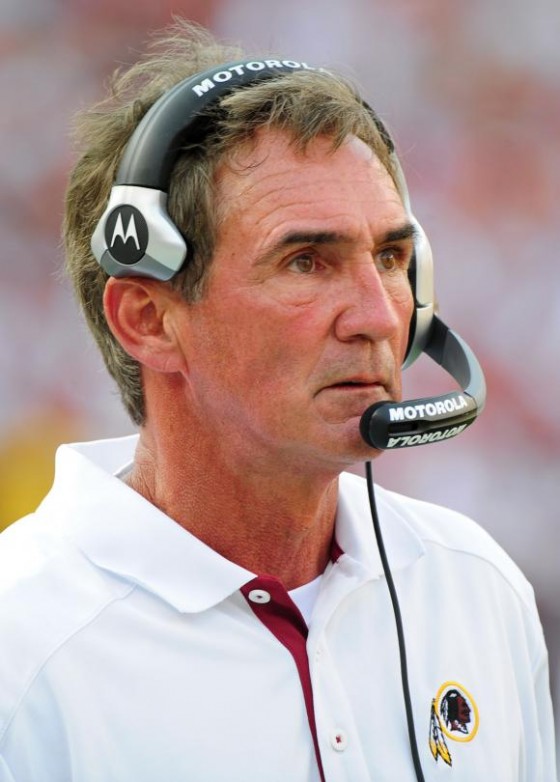 MIKE SHANAHAN – One year on the job should be enough time to realize that this cat cares more about his own reputation than the team’s welfare. His two-faced nature toward Donovan McNabb certainly pushed things to a new low, even for Shanahan. Benching a guy for Rex Grossman is almost as egregious as pinch hitting for Albert Pujols in the bottom of the ninth. Add in the humiliation of Albert Haynesworth early in the offseason by switching to a 3-4 defense and making the big fella run wind sprints for a week straight… it tells you all you need to know about the Washington Redskins’ 2010 season. This is a marriage made in hell between Shanny and the nation’s capital as the 6-10 record so aptly illustrates. ERIC MANGINI – Still living vicariously through Bill Belichick, somehow the so-called Man-genius maintained employment until the end of this season. He was a disaster with the New York Jets and an even bigger disappointment with the Cleveland Browns, but his only saving grace is that the Brownies are used to being a doormat. Thank you Mike Holmgren for seeing the light. 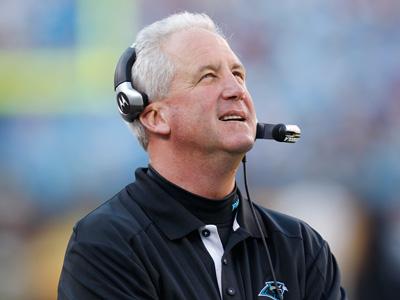 JOHN FOX – Talk about someone living off of the past, Fox had one Super Bowl appearance eons ago and kept his position despite annual disappointment with the Carolina Panthers. So you were first loser in 2004. What, am I supposed to be impressed? 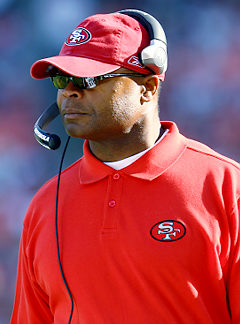 MIKE SINGLETARY – Why? Because we want winners, Mr. Singletary, and your 18-22 record as a head coach suggests that you simply didn’t fit the bill. Clearly this guy was a football player coming out of the womb, but he just didn’t cut it with the San Francisco 49ers and they finally came to the conclusion by giving him the axe. 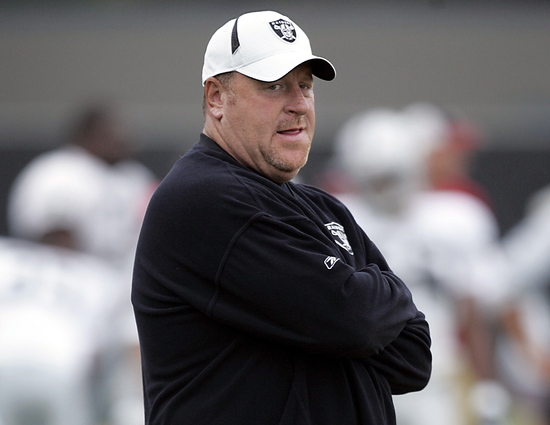 TOM CABLE – Is the most recent addition to the unemployment line and surprisingly the Oakland Raiders actually made a swift decision for once. So he took a swing at a colleague a few years back. What’s a little fisticuffs between friends? Al Davis was apparently too busy watching re-runs of ‘Little House on the Prairie’ to fire him then and Mr. Davis slept through the entire 2009 season. He just recently woke up in time to see his silver and black return to prominence going 6-0 in the AFC West, right? Not so much as the Raiders still finished with an 8-8 mark despite sweeping their division becoming the first team to miss the postseason without losing a divisional game.

The coaching carousel can be a nauseating ride if you are a fan of one of these teams too gutless to drop the hammer on their lame duck figureheads. Just take another anti-depressant and keep telling yourself there’s always next year.