Media > Movies > How Did These Become the Top Grossing Films?

How Did These Become the Top Grossing Films? 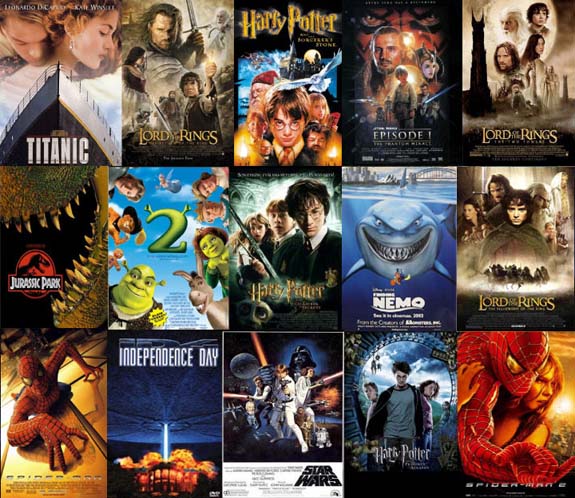 We’re well into the blockbuster film season, and each year, especially recently, it’s interesting to see which flick will crack the list of the highest grossing films of all time. For many years, E.T. – The Extra-Terrestrial and Star Wars sat atop the list. Those made sense considering they are must-see classics, but as time has passed, the list has become saturated with films that most certainly aren’t memorable. While there are a number of changing factors that contribute to the amount of money that films make over the years (including inflation, competition from other media, how soon they go to DVD and cable, etc.), what was once a list of must-see films is now a list of… how did that get so popular? Let’s look at the top grossing domestic movies of all time, and ponder how they became that way:

Being vastly over budget and late on delivery ultimately benefited this film at the box office. It came out in the winter of 1997 with little competition. Stunning visual effects, the heartthrob Leonardo DiCaprio, and an oh-so-simple-that-it-works love story sent teenagers back to the theaters multiple times. As a result, it sits atop the list by far. It even won Best Picture at the Academy Awards, though its script wasn’t all that spectacular. Regardless, this film will remain in the public eye for years to come. And look what would be number one if the guy had steered clear of that iceberg…

And let’s not forget, it had this song:

This film benefited from the untimely death of Heath Ledger, who played the Joker and won a posthumous Oscar for Best Supporting Actor. It was, relatively speaking, a fun film, but how it out-grossed films far better (basically, many of the ones below it) seems unthinkable.

The original came out in 1977, and was re-released theatrically in 1978, 1979, 1981, 1982 and with additional scenes and enhanced special effects in 1997. The impact Star Wars has has on pop culture is incalculable. How it’s not No. 1 by flying colors is likely a result of the changing factors involved in movie-going over the years. If there were a list of films that changed film-making, this, along with 2001: A Space Odyssey, would top the list.

Ugh. A sequel is the fourth top-grossing film of all time? Okay, I’ll give it credit because it wasn’t bad and it’s digital animation, which is stunning to watch, and obviously parents bring their kids to see this, which boosts ticket sales (though the kids generally are charged a smaller fee). But the first Shrek, which was better, made $267,665,011 in 2001 and is currently 38 on the list. So how this is No. 4 ever is strange, to say the least.

Stephen Spielberg’s masterpiece blew audiences away and certainly benefited from repeat viewings (I saw it twice when I was only 6 years old). The film was re-released in 1985 and then again in 2002, with minor differences from the original (look them up – Spielberg caved to political correctness). My favorite fun fact: Harrison Ford originally shot scenes for this film that were never shown.

When this film came out, fans called George Lucas a sell-out and blasted him for focusing more on special effects and less on a good script. Yet, here it is, out-grossing ‘better’ films such as The Empire Strikes Back and Return of the Jedi. MY guilty pleasure, however, are Darth Maul action figures.

Again, a sequel out-grossing the original. At least this film wasn’t bad, but the story got so confusing that at one point, two characters had to explain exactly what was going on (the scene on the beach, midway through the film). When I saw this on opening day, some viewers were dressed as pirates. Maybe if they re-release The Shawshank Redemption I’ll consider dressing as a New England prisoner.

I’m not too surprised about this film making this much money considering the special effects and it was a long time in the making. I’d been hearing about a Spider-Man movie for decades, and the first one didn’t disappoint. And this despite sissy-boy Tobey Maguire starring.

The film (the only one in the series rated PG-13) that led us to the creation of Darth Vader and bridged the way to the original Star Wars. I believe that this was the best of the three new Star Wars flicks, at least up until Darth Vader screamed “Nooooooo!” (My brother’s dog would howl when that part came on).

Part III swept the Oscars and certainly deserves the money it made. I’m guessing that the third one made more than the previous two because people who hadn’t seen The Fellowship of the Ring and The Tow Towers in theaters saw them on DVD instead. They were only separated by one year. Up next is the prequel The Hobbit, and, somehow, a second one. Expect each of those to wedge their way onto this list.

Unlike Lord of the Rings, which kept making more money as each film came out, and unlike the Star Wars saga, which is completely out of order, Spider-Man drew less slightly less interest along the way. As for the film itself, there wasn’t anything particularly great about it, just more of the same.

It’s well-known where these dollars came from – religious Christians flocking to the theaters. The controversy it drew among Jews alone made headlines, and a deep discussion even at my synagogue. Also note that this is the only film of its kind on this list, and the only one other than Titanic that isn’t completely imagined. I have to admit that even though Mel Gibson went nuts over the years, the guy knows film.

Another good film that blew audiences away with groundbreaking special effects. Spielberg is the man. Who can forget when they saw the T-Rex fill the big screen? Aside from the sequels, other films after this also had dinosaurs running around (including Peter Jackson’s King Kong).

The only thing that slowed this movie down was Treebeard. His scenes were drawn out and during repeat viewings, I find myself hitting the fast-forward button (In case you didn’t know, Treebeard’s voice is done by the guy who played the dwarf Gimli). The guy who stole the show was Gollum, played by Andy Serkis (He wrote a book about his experience, available on Amazon and very interesting… I’ve read it).

Pixar’s highest-grossing film, and rightfully so. Although, with Pixar’s track record, don’t be surprised if something else comes along that makes far more, hopefully knocking off Shrek 2 as the highest-grossing animated film.

Not a fan. They tried to portray that sand guy as a sympathetic criminal because he had to steal to help his sick daughter, and then they spun around what happened in the first film by changing who killed Uncle Ben. They should absolutely continue making these movies for various reasons, but it’s pretty sad that this is No. 16 on the list.

This is a film that will last in our memory for years to come. I even brought my grandparents to see this film, and they rarely went to movies (maybe once every 5 years). I highly recommend listening to this book on tape or CD. While there are many parts that are the same as the film, there are far more adventures to follow (like Forrest going into space and winning at chess after distracting his opponent by passing gas).

A fabulous film with fabulous music. Imagine how it would’ve done had it been made by Pixar. Disney really hit its stride in the 90s with a string of hits, and this one topped them all (at least at the box office). It also made its mark on the stage. I’m looking forward to having kids so I can show them this film.

Oh for the love of God. Don’t get me wrong, I like Shrek, but the fact that Shrek 2 is the fourth highest grossing film of all time and Shrek the Third, which isn’t even all that good, still cracks the top 20, is a true shame.

I was a huge Transformers fan when I was a kid, watched the cartoons and had the toys. It took them years to make a live action film, presumably as they waited for the special effects technology to work. It’s too bad they didn’t spend all that time polishing the script.

22. Harry Potter and the Sorcerer’s Stone (2001) $317,575,550
Considering the popularity of the books, I’m actually surprised that these films didn’t make more dough. I haven’t seen them or read them yet but I completely respect their popularity in both film and written form.

23. Indiana Jones and the Kingdom of the Crystal Skull (2008) $317,011,114
To think that the very worst Indiana Jones film made far more than the previous three. Chalk it up to years of anticipation.

24. The Lord of the Rings: Fellowship of the Ring (2001) $314,163,000
The first of this trilogy left viewers eagerly awaiting the next film, which came out one year later. I even know a guy who didn’t realize it was a trilogy, and was confused and disappointed that it ended the way it did. The Hobbit can’t come out soon enough (slated for 2012 – one reason I want to live till then).

30. The Sixth Sense (1999) $293,506,292
Possibly one of the most profitable films on this list in terms of cost-to-earnings ratio. No special effects, just a great script. M. Night was thought to be the next Spielberg after this but has since fell way short.

This data was obtained from MovieWeb.com and obviously changes as new films come out.