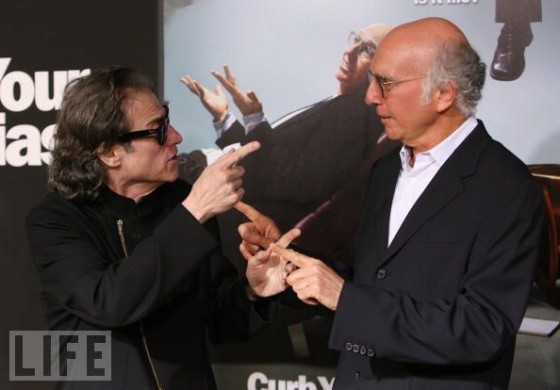 Last month Gunaxin interviewed Larry David about the TV Guide Network’s new segment called Curb: The Discussion, a panel show hosted by Curb co-star Susie Essman that discusses the issues covered during each episode of the series. Past episodes of the HBO hit began airing on the TV Guide Network June 2.

In a recent interview with the TV Guide Net another Curb co-star, comedian Richard Lewis, revealed how he first met his pal Larry David. See for yourself in this exclusive clip made available to Gunaxin:

Hard to believe they didn’t get along as kids. I can only imagine how neurotic they were as teenagers. Hormones coursing through their veins combined with a heated athletic rivalry. I bet that was one helluva Sports Camp.

Don’t forget to tune in for a Live chat with Richard Lewis Wednesday, June 16 at 9:30pm on Ustream, where you too can bombard Lewis with probing questions about the show and his life. I’m sure he’ll be more than happy to answer them.