Humor > How to be a Supervillain

How to be a Supervillain

So we’ve all seen the internet phenomenon Dr. Horrible’s Sing-Along Blog right? Well, if you haven’t seen it, surely you’ve heard about it from one of your friends, and if you haven’t heard of it, then you have no friends. But that’s perfectly all right; it’s just another fantastic motivation for you to give up your life of good and normalcy and become a supervillain.

Ugh superheroes. Come on. Don’t you hate them too? Perfect wavy hair, the chiseled 8 pack of abs (how is that even possible?), and most of all they’re so ridiculously overrated. Everyone loves superheroes. But no, not you, otherwise you wouldn’t be reading this article.

Your parents weren’t brutally murdered by criminals while you were watching. Instead, they were too busy working and never gave you the attention you so craved and deserved. You did not grow up with a pretentious self-righteousness and own sense of justice, you grew up with hatred of all those around you, the miserable misanthrope of your generation. This is why you need to abandon all (if any) of your morals now and come to the dark side. Many have spoken of cookies and other delicious pastries that come with joining the dark side as well.

I have listed four concise and easy-to-follow steps to aid you in your new life of evil.

The ‘Disaster Duo.’ The G stands for gore and the A stands for agony. I just pissed my pants in fear.

Those pathetic mortals will quiver in fear as they see you strutting along with your weapons of doom in fashionable, tailored linen. Costumes can vary from something as simple as a doctor’s white coat and goggles to a going full-out with dyed green hair, white face paint, and the suavest purple tuxedo you’ll ever see. Here’s a tip that I’ve learned in all my years of evil: The more flamboyant or homosexual the costume makes you look, the more evil you are. Go ahead, look for yourself.

You need a new name. Whatever name your parents gave you, it isn’t nearly badass enough.

Go on. Think about it. You’re holding a pregnant woman and her unborn child hostage and no one dares to do anything because of your shockingly, frightfully pink costume. Things get so bad that the SWAT team have to come. The negotiator yells out on a bullhorn: “What is your name?” He wants to connect with you, of course. You can’t exactly shot out “John!” can you? People will mock you.

“Hey remember John, the evil guy who murdered and raped all those children in that third-world country once?”

“Yeah, I remember John. Pfft John. What a pussy.”

Remember, never have anything less than two words or three syllables, if your name doesn’t at least take a good second to pronounce, it’s not a name worth having.

Your nemesis has to be your counter-part, your alter-ego, everything you’re not. But most importantly, your nemesis has to be a superhero. That’s right, the one person who can stop you is the one person you hate the most. Besides conquering the world and enslaving all humanity, your top priority is the death and/or total destruction of this one being. The best part about this whole superhero vs supervillain thing? You can’t die. If the superhero kills you, he’ll lose everything he ever stood for. Unless you’re in the Watchmen universe with Rorsarch, of course, in that case, get the fuck out, or you’ll end up being dropped down an elevator shaft.

4. Develop a weapon of doom

Preferably one that can defy all laws of physics and don’t give any logical explanations on exactly how and why it works. Here’s another tip of evil: Always call your weapon and (adjective) plus the word “ray” and some preposition and a noun. For example, the “freeze ray of doom,” the “death ray from hell,” you get the idea. This is the basis for your supervillainess, this one weapon, so make it really cool. This is why the people will fear you and why the superhero will want to kill or capture you, but don’t let him. Use your “(adjective) + ray + preposition + noun” to annihilate anyone and everyone who gets in your way! 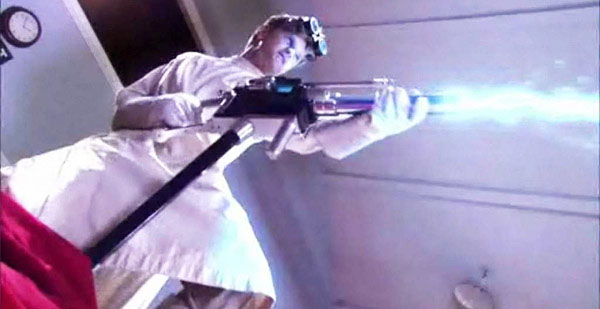 The freeze ray in action. Or was it the death ray?

Congratulations. If you’re still reading, that means you’ve successfully completed all the steps above and have not been been captured/ been publically humiliated / killed yourself in shame. Yet. Or that you decided to go ahead and read the whole article before beginning on your conquest that could potentially get you imprisoned or seriously injured. That was probably a good call. Good-bye, good luck, and when you do take over the world, remember, please don’t kill me.