Gadgets > Electronics > How To Ditch Your Cable Provider for Good

How To Ditch Your Cable Provider for Good 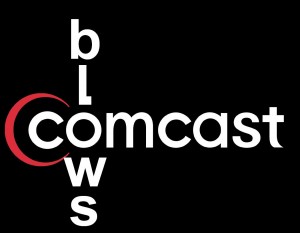 A humble suggestion for a new logo/slogan

So, you’ve finally realized that Comcast, Cox, or whatever other cable provider you have sucks huge amounts of ass and you want to get rid of them.  But how, you ask?  It’s easy, provided you’re willing to shell out for the tech.

Step 1) Buy a game console if you don’t already own one.  Either the XBox 360 or the PS3 will work, but we recommend the PS3 since it has more playback options.

What it gives you: Access to Netflix, DVD and/or Blu-Ray playback, and, oh yeah, games.

Step 2) Buy a reasonably priced home PC that you can hook up to your TV, like a Mac Mini.  “Home theater” PCs are generally a rip-off, but they might be your only option for a computer that outputs HDMI.  Since you’ve got the game console

What it gives you: Access to Hulu, Boxee, Joost, and other online video streaming options.   Can also serve as a Netflix backup, but the game console is a much better option since the resolution will be higher.

Step 3) Buy a USB HDTV dongle.  People tend to forget that all that wonderful network television you generally catch on cable is actually broadcast for free over the airwaves.

What it gives you access to: The major networks in your area.  Mostly we threw this in because it means you can watch sports.

Step 4) Download Boxee, Hulu Desktop, and Joost, just to give you the most viewing options.  Between the three of them and any, er, custom solutions you may have, pretty much any show you want to watch will be available online.

Step 5) Buy a flying mouse of some sort.  The best is Hillcrest Media’s Loop, a “pointer” that’ll basically be a nice circular remote.

Step 6) Configure the lot of it to your tastes.

Step 7) Cancel your cable except for your internet access in writing.  Maybe include a picture to remind them of the fun times you guys had together, you waiting at home, them not showing up, you calling customer service, them not fixing your problem.  Maybe include a loving hand gesture in the photo.