Humor > Lists > How to Have Fun on Thanksgiving

How to Have Fun on Thanksgiving 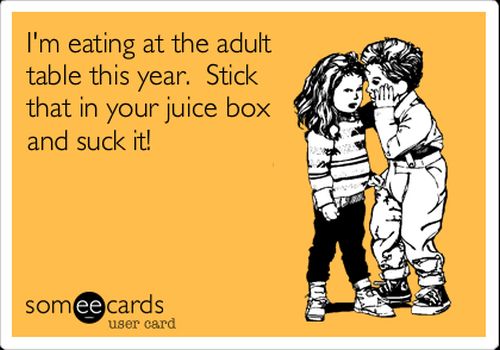 Thanksgiving is less than a week away and most people fall within two categories: either you’re thrilled to pieces to get together with kith and kin and live for a day among acres of starch-laden food and shitty football, or else you hate everything and everyone and would rather have your eyes gouged out by knitting needles than spend any time with your asshole family members. There really isn’t much of a gray area there, although I will admit I love just about 99% of the Holiday, save for a few people who shall remain nameless because… well, because. 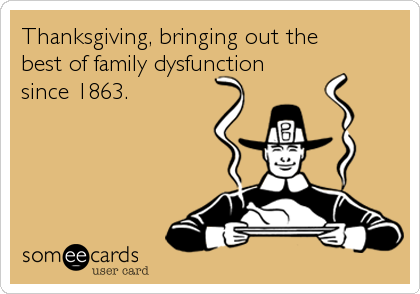 Anyway, the Holiday is right around the corner and you might as well figure out right now what side of the coin you’d like to be on, because once you put the day into motion, it’s really hard to turn back and there’s no point in pissing off everyone around you if your glower power is in full effect. So how can you have fun no matter what? Well I’m glad you asked. Sit back and let me help you not be a giant dick and have fun on Thanksgiving. 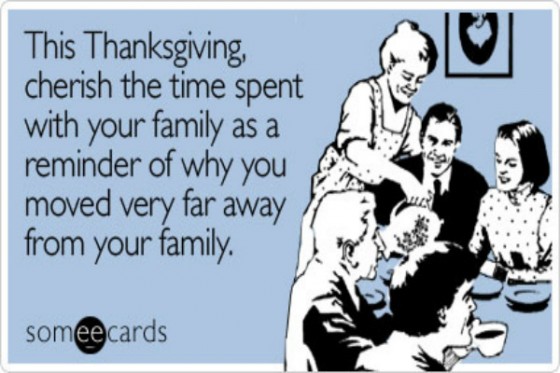 Look, I know that a lot of you out there have had… um, “Histories” with certain members of your family, and I can dig that. I have certain members of my family whom I’d just as soon see behind bullet-proof glass in a zoo than actually talk to in person because they are fucking patronizing assbags who have no right to be opening their fat fucking mouths. But I digress. I have made the executive decision not to see these people this year and my soul is smiling. However, many of us don’t have that choice and are destined to sit near some of these fuckwits at the Holiday Dinner table. So what do we do? 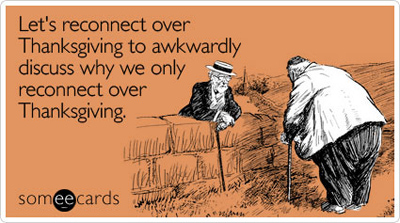 Well, there are a few options at your disposal, one of which is to just pretend like you’ve never pretended before, even when you were a kid pretending to be Spider-Man jumping off your bunk bed. You pretend the shit out of the situation, put on your big-boy acting pants, and knock it out of the room. Be cordial, but mostl just ignore these people. And if all else fails… 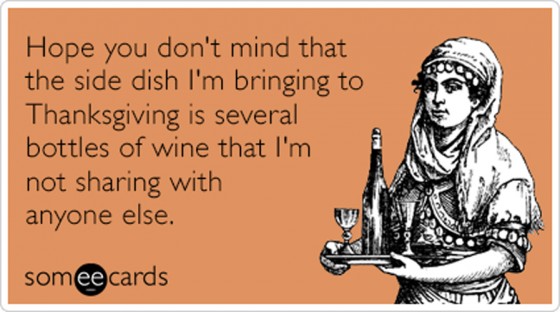 The Holidays are a time for enjoying the things in life that you might not otherwise imbibe in on a weekday. Specifically Thanksgiving Thursday and more specifically: Alcohol. Nothing soothes the savage family beast like the deliciousness of booze, beer, and/or wine. Maybe don’t mix them, though, that’s just asking for trouble. But if you’re trapped between your nosey Aunt Gladys with the mole that has more hair coming out of it than a standard eyebrow, and your brother in-law who is just about as smart as a bag full of bowling balls and nearly as charismatic, then maybe you should be knocking back a few, ya know? 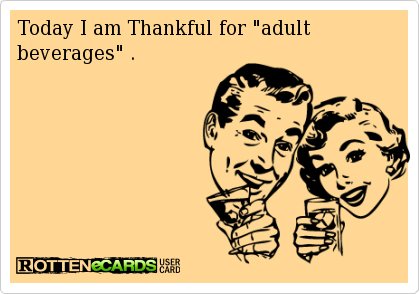 I’m a beer guy, but there’s no reason why this can’t apply to Bourbon, Scotch, Vodka, Whisky, or any other spirit up to and including Wine. It’s already a party, so you might as well get in the mood, right? Besides, getting all sloshed is always a great way to keep the smooth flowing, and who doesn’t want to be smooth around a whole bunch of people you actively avoid seeing the other 364 days of the year? Play it cool, keep something alcoholic in one hand and enjoy yourself. When it’s over you can go back to pretending your family all died in some kind of mass bus accident.

Do Not Do Thanksgiving Stag 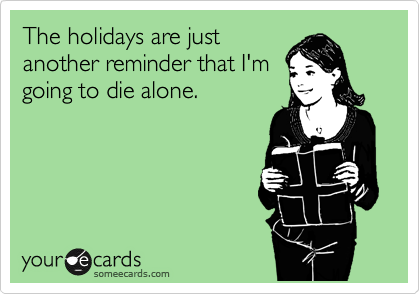 Even if you actually are single, and you actually are happy that way, find a way to take a partner with you on Thanksgiving. This might be a great time to spring the news on your family that you’ve chosen a gay lifestyle, even if that’s not true at all and you just want to bring someone to hang out with who isn’t your dipshit brother or your dad who still thinks you should have been a cobbler like he is and his father before him. 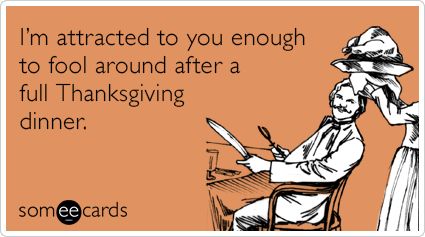 So bring a buddy whether you’re a dude or a chick, this can work either way, and do something crazy. Act a fool around your family! Why not? There’s no reason not to go nuts with your phony lifestyle choice and get all clingy with a friend! Who’s really going to say anything anyway? People in large social gatherings –especially those comprised of many, may family members- tend to keep the chatter to themselves and maybe a spouse, so it’s not like you’re gonna have to explain why your hands are in each other’s pockets. But however you choose to play it, just take along a friend so the entire focus of the day isn’t on why you haven’t dated since the Clinton administration.

Even if You Want To, Do NOT Over Eat 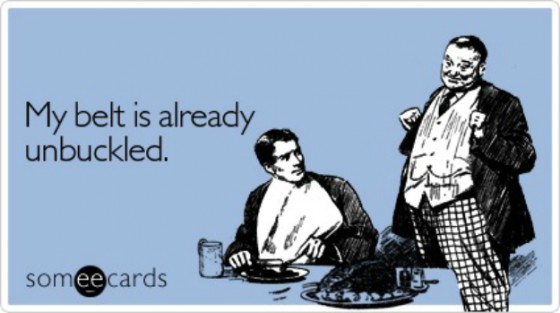 Thanksgiving is traditionally a day for mass consumption on a ridiculous level. There is so much food being passed around that you are seriously seeing enough to feed an entire homeless shelter for a month. This is sad because I can practically guarantee you a sizable chunk of that shit is gonna hit the trash, not including the volume of leftovers that you’ll forget about right around January first. 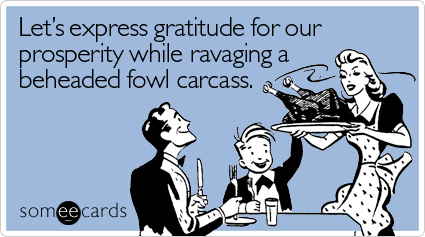 All this aside, there is no excuse for cramming your gut so full of turkey and its myriad trimmings that you need to actually take your pants all the way off. Besides, taking your pants off should be part of the fun. It’s tough to have a good time when you’re doing breathing exercises keeping that food baby down, and there’s more than enough groaning coming from your uncle struggling to breathe through emphysema. So take it it easy, keep room for pie, and always save a space for more alcohol.