It’s no secret that product placement has been invading our television programming for the past decade. Over the past few years, it seems that car manufacturers are among the most noticeable popping up in your favorite dramas. Apparently the networks don’t make money on subtlety, as most product placement is so glaringly obvious, it’s almost a joke. Actually, some writers have begun just making it a joke, since there is no way around it.

Hawaii and Chevrolet, Beautiful Together!

From Hawaii Five-O characters discussing the awesome features of their Chevys during the middle of a high-speed pursuit, or every character apparently being given a brand new Kia this season on The Glades, you’d have to be pretty dense not to see what is going on in these shows. To make sure the point is driven home even farther, there is always a commercial for that brand of vehicle directly following its placement in the show. I know because I’ve seen them fly by when I hit my 30-second skip button on my DirecTV DVR (cha-ching, pay me DirecTV). Yeah, so it’s our own damn fault, as most of us don’t really watch the commercials. 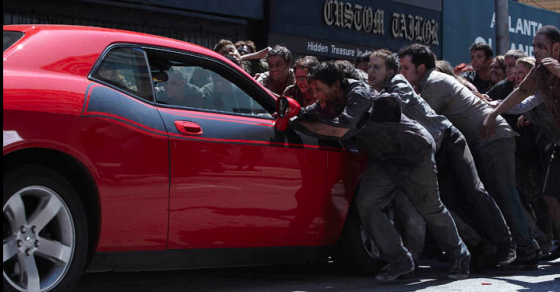 “We just want to wash your windshield!”

One of our favorite shows, The Walking Dead, is no stranger to this activity either, although I think they integrate the vehicles into the story much more effectively than other brands and shows. Remember in Season 1, when Rick helped Glenn boost his dream car, the new Dodge Challenger? He drove it like he stole it (he did) through the streets of Atlanta to distract the Walkers, and then joy rode the thing all the way back to camp. While fairly obvious that it was a product placement, it wasn’t like the entire cast all of a sudden were each given a shiny new Dodge to drive off into the apocalyptic sunset, just one character. Ok, so in hindsight that was pretty bad… but who didn’t want to take Glenn’s place in that scene?

Who needs a Hummer when you’ve got 1 Horse Power?

I have found it a bit odd how many times Sheriff Grimes has strolled past an entire parking lot full of military Hummers (at least 3 by my count), while his crew is driving mostly beat-up inadequate cars. An armored vehicle with tons of space and loaded with weapons seems rather ideal to me. Hell, for off-road capability alone, you’d think T-Dog would love one for his u-turns :

So it was a bit surprising when in Season 2, Shane discarded a seemingly problem free and capable Jeep Wrangler for a new ride, the Hyundai Tucson.

Hyundai and Gerber in one lucky scene!

Ok, so the Jeep lacked a roof, which could be a bit problematic under Zombie attack, but the Tucson acquisition was fairly obviously more product placement. Again though, I felt it was fairly well integrated into the show, and wasn’t a glaring commercial. They even showed us how roomy Shane’s new Shaggin’ Wagon was in the front seat :

So now Shane is dead (spoiler alert!), and although Glenn and Maggie drove the Tucson off the farm, it appears in Season 3 they’ll mostly be bunkering down at the prison. Plus, AMC already gave the Hyundai Tucson away, so we’re pretty sure you won’t be seeing it again on the show (although it was full of weapons and ammo that Shane hid). Which brings us to the latest development in Walking Dead vehicle sponsorship, the Hyundai Elantra Coupe Zombie Survival Machine. This appears to be something that was developed for the comic only, but who knows we may see it down the road in later seasons, because comic book nerds hate it when the show strays from the original. 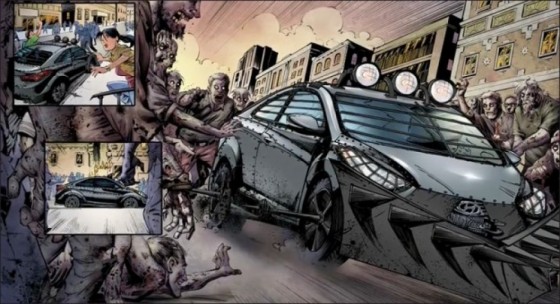 Essentially Robert Kirkman partnered with Hyundai to design a Zombie proof car for Issue #100. Again, we would probably have started with a military grade Hummer H1, but the sponsorship obviously was the driving force behind this. We’re assuming that Hyundai wanted to push their new Elantra, but it seems obvious that something like the Santa Fe (which incidentally we’re traveling to Utah to test-drive next month) would have been a better choice from their line-up. Here is Kirkman awkwardly discussing the project :

This past weekend at Comic-Con, the real life version was revealed, and I have to say, I’d feel more bad-ass driving this than Dale’s Winnebago. 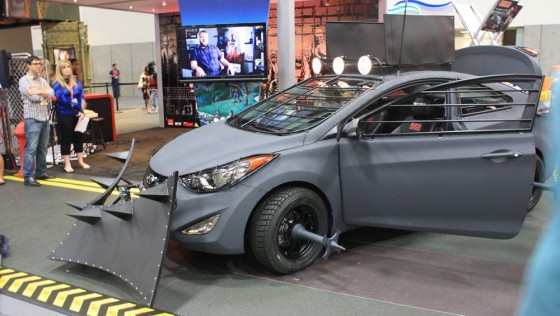 Won’t somebody think of the poor cows?

Here is a bit of info from the Press Release :

Hyundai’s Zombie Survival Machine showcases modifications including: a front-end custom zombie plow with spikes, armored window coverings, a roof hatch to allow passengers to fend off attacking walkers, a trunk full of electric and pneumatic weaponry, front and back-end floodlights, spiked all-terrain/rally type tires, a CB radio system and much more. Fans can view a series of behind-the-scenes videos that detail the creation of the Zombie Survival Machine and showcase the car build from start to finish at HyundaiUndead.com. 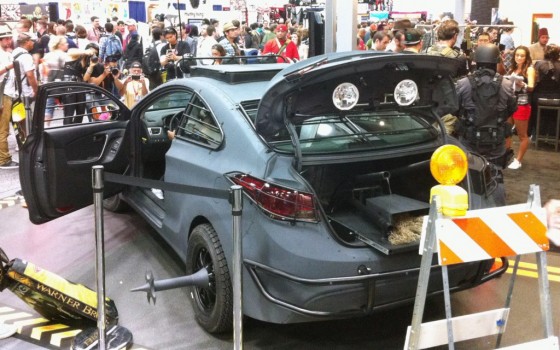 Just look at the dorks swoon!

Ok, so maybe it’s not the most practical starting vehicle, but the finished product is pretty cool looking. The choice between this modified Zombie Survival Machine and a standard Hyundai Elantra is fairly obvious if shopping for a new vehicle during the apocalypse. I’m not sure if any of these will be options offered through your local Hyundai dealership though.

Overall I applaud The Walking Dead and Hyundai for being creative with their product placement. I’m sure some fans see this as pretty cheesy, but it’s nice to see a brand take a risk and do something so unexpected.