We’ve extensively documented Hyundai’s Walking Dead partnership in the past, and last year they made a splash at Comic-Con by unveiling the Zombie Survival Machine. This year they have kicked it up a notch with the second edition, based on the bad-ass Hyundai Veloster. Robert Kirkman really outdid himself this time, as this design is far more inspired than the previous iteration. 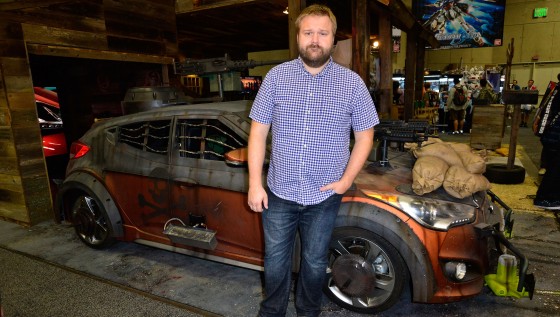 This Veloster ZSM is armed with a more aggressive arsenal of weaponry designed to inflict serious damage upon flesh-eating zombies standing in the way:

Last year we questioned the selection of the Elantra as the basis for the vehicle, and some of the same arguments could be made against the Veloster. It’s tough to imagine driving it off-road to escape from Zombies, despite how sexy it looks. Hyundai has heard the cries of the Internet which loves to argue about anything, and has put the power in your hands to create your own Zombie Survival Machine. “You’re so smart, design your own!” Fine, we will.

Enter the The Walking Dead Chop Shop, an ultra slick app by Hyundai which allows you to select one of three vehicles (Elantra, Veloster Turbo or Santa Fe) and then customize it with nearly 300 parts. Fans can then see if their designs would make the cut by submitting to a contest in which the ultimate judge, Robert Kirkman, will review the concept and execution. 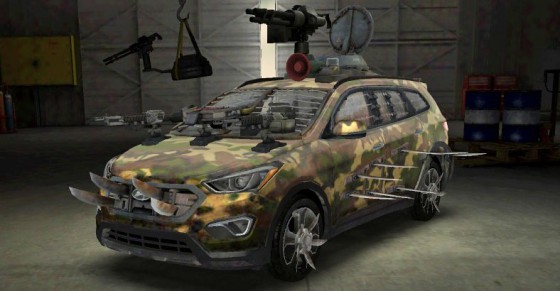 Honestly the app is a bit difficult to use on a smartphone, due to the complexity and the small size of the screen. It was probably designed for your kids who have better vision, smaller fingers, and more free time. However the iPad version is absolutely awesome, and incredibly addicting. Check out this video where a cute girl instructs you on how to construct your vehicle :

Now if we could only play a video game with our Zombie Survival Machines in a modern version of Spy Hunter or Carmageddon set in the zombie apocalypse, we would never leave our house. Make it happen next year Hyundai!