Humor > I Bought the Muppets

I Bought the Muppets 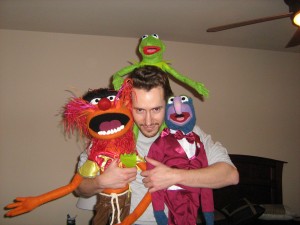 The economy is horrible. People are losing their jobs. I just lost my rent-paying roommates. The company I work for is making cutbacks. So what did I do? I bought the Muppets.

What better way to cheer yourself up then to own Kermit, Animal and Gonzo? These are high quality, to scale replicas. They’re not puppets, but ‘photo puppets,’ the kind they use when photographing them for calendars and posters.

These are the greatest things I’ve ever bought in my life, and I urge any fan of the Muppets to go out and buy these while they’re still available. Keep in mind, they’re limited edition, and I was lucky to get my hands on Kermit, who originally came out in 2006. Up next, Fozzie Bear, but as of this writing, the company who makes them, Master Replicas, put it on hold.

Kermit the Frog Photo Puppet Replica. Kermit is really the only must-have of the three, and for that reason, the most expensive. They made 2,500 of him, and I’d say this one is good for kids because there aren’t too many breakable parts. Kermit, along with the others, comes with a display stand and also a very nice box.

Gonzo Photo Puppet Replica. Gonzo the Great comes complete with a tuxedo and shoes, all very high quality. You could probably even remove the clothing and put it on your kid. Unfortunately his nose won’t stay in place like the rest of him when you bend it around, but that’s okay, he’s still worth every penny.

Animal Photo Puppet Replica. Because of his crazy red hair, Animal is the only one not good for kids because the hair could easily get pulled out, and you don’t want that to happen with this guy. He’s also much bigger than Kermit and Gonzo. You’ll be tempted to yell ‘Woman! Woman!’ when he comes out of the box. There were only 1,500 made of him, unlike Kermit and Gonzo. (See Gunaxin’s Tribute to Animal.)

Fozzie Bear Photo Puppet Replica. Not yet available. According to Muppet Wiki: Due to low retail support for such a high-priced item, production of the product was put on hold in the fall of 2008. The company is currently searching for a smaller a factory or workshop to produce the product in a more limited production run. As of January 2009, no developments have been reported.

Rumors of others: Miss Piggy and Rizzo the Rat.

On Youtube, I found this guy who made a video review of Kermit. It’s nine minutes long, but if you’re serious about buying one, might wanna watch it: