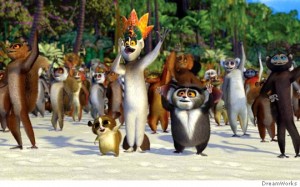 Apparently I have some sort of fetish for unexpected characters dancing to hip-hop music from my youth. I proved it by selecting the Bridgestone Dancing Astronauts Commercial #1 in my Funniest Super Bowl Commercials List, and I’ll admit that I have watched the dance video on my Madagascar DVD more than a few times. I seriously can’t get enough of this crap, I might need therapy:

Unfortunately like anything good, marketing folks have to beat it into the ground, and they used it again on the new film. I haven’t seen Madagascar – Escape 2 Africa yet, but I probably will end up buying it on DVD, despite their best efforts to ruin a good thing: