When it comes to NHL Ice Girls, there are vast differences among NHL teams. Some teams have female only squads which come out on the ice in skimpy outfits and push the ice around with snow shovels, while other teams have a dance team or spirit squad which is limited to off-ice activities. Some teams employ a combination of both, and still other more conservative teams have no such squad at all.

Lucky for us, the two teams competing for the Stanley Cup in the finals have fairly liberal squads of Ice Girls, with exposed midriffs and cleavage. They’re even allowed on the ice, much to the delight of the men in the crowd. So for the first Stanley Cup match-up of Original Six teams since the late 70s, we’re proud to present the Ice Girls of the Stanley Cup Finals :

The Chicago Blackhawks Ice Girls, the “Ice Crew”, are among the hottest in the league, and sponsored by Bud Light. Although we’ve profiled them in the past, we’re back with some new photos in honor of their Stanley Cup appearance. As you can see, a big part of their responsibilities includes clearing the ice with those shovels. By the looks of this squad, the underdog Bruins and their Ice Girls have their work cut out for them. 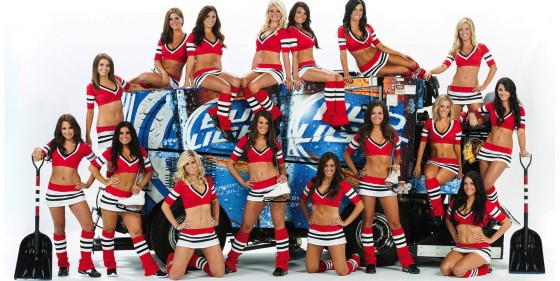 The Boston Bruins Ice Girls haven’t historically been as sexy as the Chicago squad, but we welcome the plunging necklines of their latest costumes. These lucky ladies don’t appear to be forced into manual labor by shoveling the ice, but they do skate around and pump up the crowd. We found the hottest photos of the Bruins Ice Girls on the web, so you can judge for yourself how they stack up again the Hawks Crew.

Assuming you enjoyed this article, we think you’ll also appreciate our equally impressive Dancers of the 2013 NBA Finals feature :