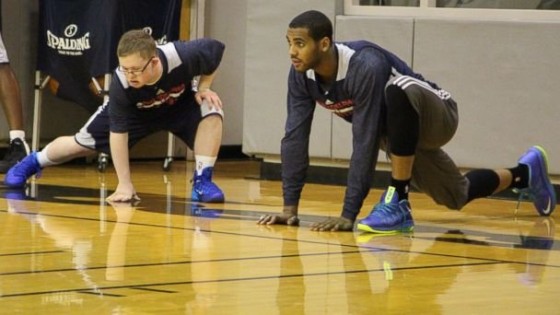 Grow with a teammate stretching during one of his first practices with the Philadelphia 76ers.

The Philadelphia 76ers offered Kevin Grow, a Pennsylvania teenager with Down syndrome, a two-day contract to join the NBA team.

It has been a memorable week so far for Grow, as earlier he scored 14 points and led his high school’s senior team to win a game. The victory became even sweeter when he found out the 76ers asked him to become the newest member of their NBA team.

“It’s been a pretty crazy time for him,” said Earl Grow, Kevin’s father, in an interview. “They [the NBA] had a full press conference and actually gave him a contract to sign. They let him practice with the team.”

Grow’s father said the team went out of their way to make things really special for the 18-year-old. Grow played a one on one game with his favorite player, Evan Turner.

The 76ers first heard of Grow when John Mullins, his high school coach, wanted to arrange something special for him. After seeing the teen’s game-winning shot, however, the team immediately took steps to prepare an offer.

Mike Goings, the 76ers community relations manager, said the NBA team recognizing Grow has taken things to another level by providing inspiration to athletes everywhere. “You can go out and achieve your goals,” he said. Grow practiced with the team Monday, and is set to début on the court tonight like a full professional player.

“We have a jersey for him in his locker with his name, sneakers and the whole thing. He’ll be with the team, he’ll help lead them out, he’ll be introduced on court,” Goings explained. “He’ll be out there when they’re warming up and sit on the bench and things like that, but he won’t actually play in the game.”

Grow’s father was very thankful, saying, “For us, it changes his life. He’s always going to be that kid that got the NBA contract and scored the points in the game.”