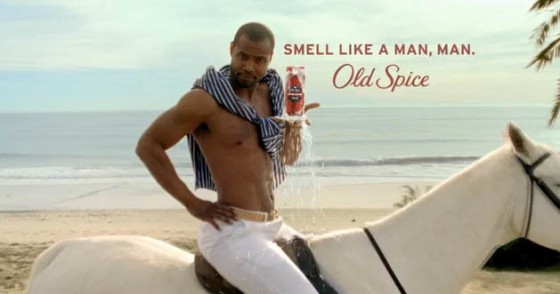 Yes they’ve been talked about and aired numerous times, but when it’s a commercial as funny as the recent Old Spice ads we’re talking about, then they’re definitely worth watching all over again. Old Spice has a history of pretty sweet commercials once thought to have ante-penultimately culminated with Bruce Campbell and Neil Patrick Harris and their hysterical appearances. Ah but then came our favorite swell-smellin’ fellas, Isaiah Mustafa and the ‘Tim and Eric’ directed Terry Crews and the funny just got funnier. Let’s pretend just for a second that, for some odd reason -like maybe you’ve been holed up in a cave somewhere- that you literally have no clue what I’m talking about. Well then, check this out:

That’s where it all began, kids. “I’m on a horse.” This is just one of those ads you can’t help but laugh at regardless of what the product is. We all know it’s for Old Spice, but it could just have easily been for pot pies and still made me laugh. Oh, and guess what? There was also a sequel:

“One Bajillion times more…” Is anything funnier than overly exaggerated hyperbolic numbers? No. There isn’t. Well, okay, I guess this might be:

A swan dive into a jacuzzi filled with a motorcycle. And PANTS. I think the level of coolness and extreme ridiculousness just got trumped.

And then we dive headfirst into Terry Crews. Now Terry here is sort of like Isaiah times the power of fifty. That’s a big number I’m not comfortable figuring out right now. The point is, when it comes to the epitome of manliness… well, just see for yourself:

Yep. Completely and without a shred of remorse insane. Also funny. And now you, too, understand. I’m on a horse.