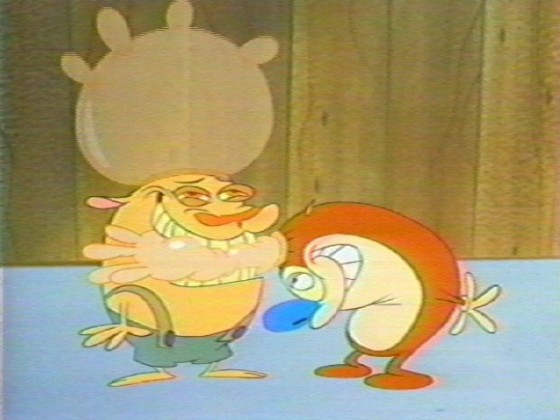 The classic comedy team has been an entertainment mainstay for as long as there’s been watchable cinema and television. As always, it seems that we have the one ‘straight man’, as it were, who represents the least idiotic of the duo. This doesn’t necessarily mean that the main lead protagonist is any less clueless than his counterpart, it just means that his innocence and idiotic demeanor just seems less pronounced. But then we have the jelly to the comedic paring’s peanut butter; he is, almost always, the absolute least intelligent of not only the group, but often of the entire show. Take, for example, the Flintstones. We all know that between Fred and Barney, it’s the former who maintains the highest degree of smarts and it’s his buddy who commands levels of absurdity hitherto unknown. And for a while, that was the classic team. And then came a virtual pantheon of cartoons featuring pairings consisting of the smart guy, and an absolute dumb-ass of a partner. Check these out.

The Team: Tennessee Tuxedo and Chumley
The Stupid One: Chumley the Walrus

Best friends and cohorts, Tennessee and Chumley spent their days at Megalopolis Zoo doing everything in and out of their collective power to make life a bit more comfortable. More often, they just plain escaped only to get into all kinds of trouble in the outside world. But, were it not for the tomfoolery of Chumley, things might have worked out differently. Even through the efforts of educated professor, Phineas J. Whoopee, at the assist, Chumley would still find ways of acting stupid enough to foil Tennessee’s plots. I guess that’s what you get for a one-of-a-kind South Pole Walrus.

The Team: Dynomutt, Dog Wonder and the Blue Falcon
The Stupid One: Dynomutt

Imagine if Fred and Scooby Doo went off on their own as a team of superheroes and Scooby somehow acquire robotic body parts and a slightly more coherent voice, then you’d roughly have the outline for the Blue Falcon and Dynomutt. Thankfully, Dynomutt’s arsenal of robo-gadgetry was generally helpful, however by proxy, or else his bumbling assistance over all would have issued him a trip directly to the dump. And man, you’d think with all his technological advancements, someone would do something about that ridiculous laugh.

This Flash-animated web comic by the Chapman Brothers is hugely popular and widely known throughout the internet as a whole. Basically, it plays around two titular characters: a be-gloved Luchador-style wrestler named Strong Bad, and an armless, sports fanatic who also happens to be perhaps the most genuinely innocent, yet galactically stupid character around. Though many of his peers appear to be equally, yet oppositely, buffoonish (see: Strong Sad, Coach Z, Homsar) it is truly Homestar’s severe lack of wit that propels this series.

The Team: Beavis and Butthead
The Stupid One: Beavis

Though I suppose this is like comparing which is the greener Granny Smith apple (as they all appear to be the same), it seems that Beavis tends to be the dumber of the duo. He is a severe case-study for ADHD and some obvious, yet unknown, other mental maladies. Though Butthead leans to the more sardonic side of the relationship, he’ll still wield his superior knowledge by admonishing and otherwise verbally abusing Beavis. But Beavis, being the idiot, just takes it in stride while giving as good as he gets. There’s your best friends, right there.

The Team: Ed, Edd, and Eddy
The Stupid One: Ed

A very close-knit group combining the finer traits of a larger collection. Ed: bat-shit crazy. Edd: an inventing clean-freak. Eddy: The leader who is also the sinister conniver of the crew. But it’s Ed we focus on here, as it seems he ends up somehow becoming the center point for every episode and is often the one who finds himself entangled of layers of his own ineptitude.

The Team: Dexter’s Laboratory
The Stupid One: Dee Dee

Dexter is a boy genius. His lab, which sits just beyond the confines of his bedroom door, occupies some humongous space likely beneath the family home, and this is his Sanctum Sanctorum. His sister, Dee Dee, is the proverbial fly in the ointment, as well as the monkey wrench in Dexter’s gears. She is full of pre-teen innocence and prone to bouts of flighty, wispy whimsy that literally grates on Dexter’s every nerve. When she does manage to find her way into Dexter’s lab -flitting about carelessly- she uses her prominent stupidity to wreak havoc.

The Team: Pinky and the Brain
The Stupid One: Pinky

The premise is simple: Two mice trapped day in and day out in a community cage strive relentlessly to come up with numerous ways to take over the world. Sure, what else are they going to do? The Brain is just that: brilliant, sinister, bold, and gifted with the voice of Orson Wells to boot. Pinky, on the other hand, is a raving lunatic. And here we have our first problem: Pinky will manage to inadvertently sabotage Brain’s ploys at every, stupid, turn.

The Team: The Simpsons
The Stupid One: Ralph Wiggum

I could just as easily say these next few lines, but I really like the cut of Wikipedia’s jib: “He is best known as the show’s resident oddball, and has been immortalized for his non sequiturs and erratic behavior. His lines range from nonsensical, or bizarre interpretations of a current event, to surprisingly profound statements that go over people’s heads. For this, Ralph is somewhat of an outcast among his peers, although he seems to be on good terms with a fair number of the major child characters on the show.”

The Team: Ren and Stimpy
The Stupid One: Stimpson J. Cat

The two of these critters (Ren: an Asthma-hound Chihuahua, and Stimpy: a cat) might as well be humans. They often live in the comforts of a realistic house (in the later episodes), have furniture, and -at least in Ren’s case most often- hold down some form of employment. Though not related by birth, they are like brothers, or, even more oddly, like an old married couple. But it’s the differences that make them so opposite. Ren is evil incarnate with a violent streak in spades, whereas Stimpy is kind, air-headed, and thick as a brick. It’s a match.

The Team: Spongebob Squarepants
The Stupid One: Patrick Star

Bikini Bottom is a mass of fish-life and typical goings-on of a regular above-water society. But the best friend combo who live in a pineapple and under a rock, respectively, are Spongebob and Patrick. Spongebob is the epitome of childhood innocence and happy-go-lucky living; he loves his fry-cook job at the Krusty Krab almost to a fault, and spends his free time jelly fishing. Patrick, conversely, is a bit of a mystery. Oh, there’s little doubt that he is colossally stupid, but there’s something else, just beneath the surface, that’s almost too scary to mention.