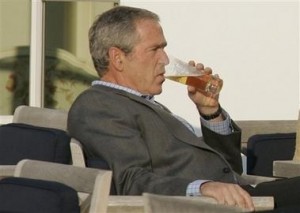 Just like any big televised event, the Inauguration is most properly accompanied by a drinking game. Stepping in to fill that demand are the good folks over at Next Round, who have developed a game to keep you good and drunk during this historical event. George Bush seems a bit depressed about his legacy so maybe he will use this occasion to begin drinking again with you. Here is the first batch of rules, but head over to Next Round for the complete Inauguration Day Drinking Game.

Drink Every Time Someone Says: