Insane Acts of Manliness from England’s Most Terrifying Prisoner

The image above is actor Tom Hardy (Bane) as Charles Bronson, widely considered one of the most terrifying men in prison in England right now. Why is he so terrifying you ask? Well, he holds the unofficial world record for most rooftop prison protests, has spent 30 years of his life in solitary confinement and has made a hobby out of taking prison wardens hostage.

Bronson considers himself one of the strongest men in England, a fact we’re not going to argue, not when he’s been known to …

In his book (yes, he wrote a book) Solitary Fitness, Bronson describes how he once tore the tendons in his arm by punching bulletproof glass. There’s no way to add any hyperbole to that sentence, this man punched through a material designed to stop fucking bullets fueled entirely by prison food and rage.

Bend the bars to his cell

Bronson has served time in almost every prison in England, the reason being that no prison can hold him. Literally. Bronson has been known to bend the bars to his cell. When he’s put in a cell without bars, he’s been known to simply kick the door down. Steel doors made to contain an entire prison can’t stop Bronson from leaving his cell if he gets bored. And if he gets mad he just …

Rips washing machines out of the wall

When Bronson was told he wasn’t allowed to go to his grandmother’s funeral he got a little annoyed, by which we mean he rampaged through the prison and straight up tore a solid steel washing machine (full of water) out of the wall and threw it across the room. Rumor has it that the sound of his biceps flexing  actually caused a rift in time, which we honestly believe to be true. 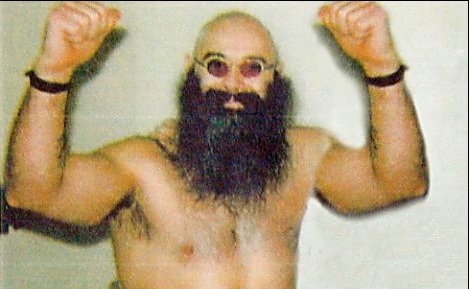 This picture is actually from the future.

Now we’re not glorifying Bronson in any way —  the man is a criminal after all. But you have to admit that knowing there’s a man out there who can do 132 press-ups in a minute, knock out a cow, and pick up a regular adult male and sprint with him is a testament to the potentials of human strength. Man, we need to go do some press-ups or something.