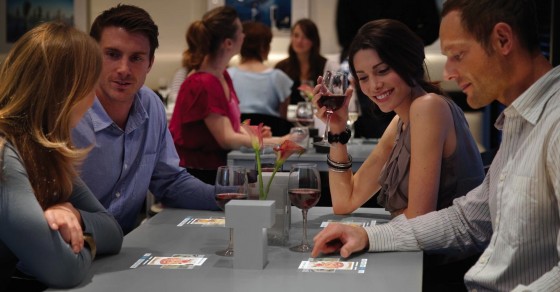 Recently over a dinner discussion about tablets being used instead of paper menus as restaurants (should be more widespread), I posed the idea of an interactive touchscreen for the table. Unfortunately (for me) like almost every great idea in the world, someone had already though of it, and such a thing exists. Gizmodo reported in 2008 on a restaurant in London with exactly that idea, interactive tables which allowed for ordering, games, and customizable table cloths.

They’re starting to pop up all over the world in different forms, and the uses of such technology are limitless. Just the ability to display photos of the food, update the menu on the fly, and accept orders should be enough to get most restaurants on board. Imagine videos of the chef explaining each dish personally to patrons, or live video feeds of your dish being prepared. Kids can be kept busy playing games, and adults could use the tables to look up information or draw diagrams during a business lunch. How many times have you drawn a sketch out on a paper napkin?

Check out the gallery below of some ways this idea has been implemented. We can’t wait to see this at restaurants in our neighborhoods :