While plenty of other people have tried to splice the genes of horror and comedy in their work, Jonathan Wojcik’s comics, stories, and articles are some of the biggest success stories in the fields. His drawings have a style and willingness to go too far that make many of his comic strips creepier than even many conventional horror comics. But at the same time many readers love the sort of “ugly cute” style that he gives many of the characters in it. 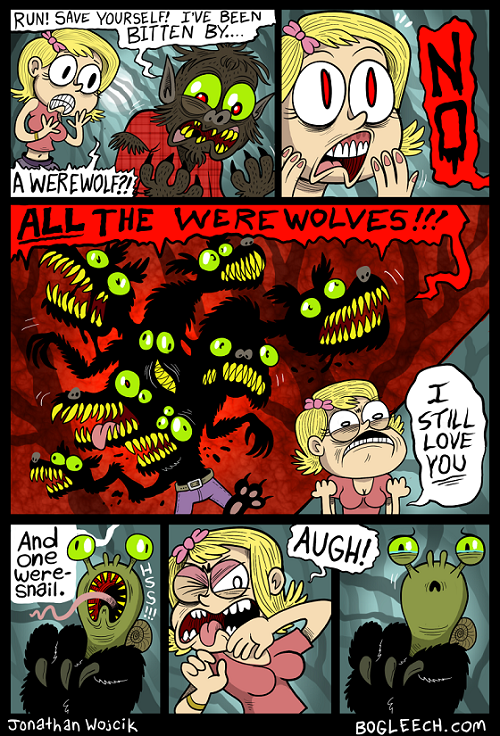 Perhaps that’s because Wojcik is so in love with the wriggly, slimy, invertebrate side of nature that it infects his monstrous creations and from there infects the viewer (even while said viewer is often grossed out.) So it was with a mix of delight and apprehension of the kind he’s made his stock-in-trade that I interviewed this exceptional artist.

What was the impetus to start the site Bogleech.com?

I just wanted an outlet to share things I found interesting, but back in 2000 the word “blog” hadn’t even caught on. All anybody ever really had were “homepages.” I was inspired by comedic pop-culture sites like seanbaby, I-mockery and especially x-entertainment, and started up on geocities when that was one of the big ones.

How did you learn to draw?

I just always did, and never stopped. All my earliest memories are of drawing. I used drawings to keep record of animals, monsters, cartoon characters and anything else I found interesting, often writing little notes on what they were and their behavior, or trying to illustrate those details before I could write fluently. I think I had more fun drawing the enemies and bosses out of video games than actually playing them.

Of your many Bogleech comics (which have been shared by entertainment figures like Jhonen Vasquez of Invader Zim) which is your favorite?

It’s not the best drawn, but probably this: 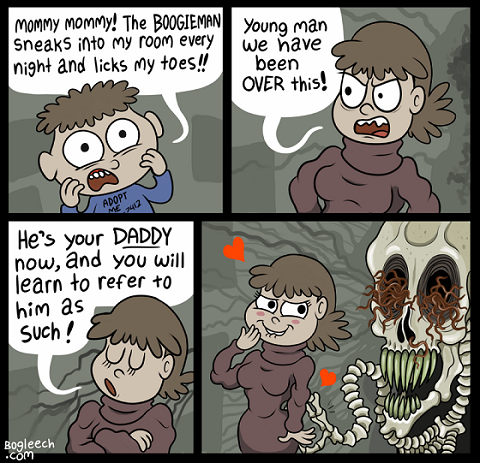 Ridiculous childhood fears are one of my favorite sources of comedy in just about anything. Almost everyone can relate to them, but everyone knows they were ridiculous and can have a sense of humor about it. It’s a dark, cynical subject without being insensitive.

One of the other high profile projects you have on Bogleech is Mortasheen, which is basically a parody of Pokémon. How did that start? 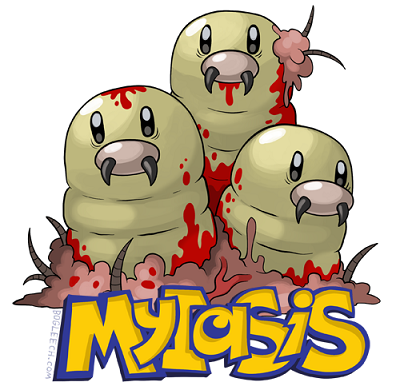 I’ve always thought up an endless stream of monsters, often just idly, but never knew what to do with them. When “pet monster” games started to really catch on I decided to start dumping excess creature designs into a similar sort of world for fun. It didn’t start as any serious endeavor but people instantly started following and sharing them, and it just kept growing and growing.

It no longer resembles much of a pokemon parody, but can still be considered a loving homage.

I understand that’s due for an online publication by the company Cat Powered Raygun. What can you tell us about that?

It’s going to be a pen and paper role-playing game, with its own unique gameplay system devised by Morgan Mullis and Jacob Cales. I can’t even guess a ballpark release date yet, but I’ve completed all the necessary artwork and most of the writing is in place. Besides providing everything you need to run a game, the core book will be the first thing really detailing Mortasheen’s world. I came up with a ton of characters, environments, cultures and side-plots roughly as silly as the monsters themselves. 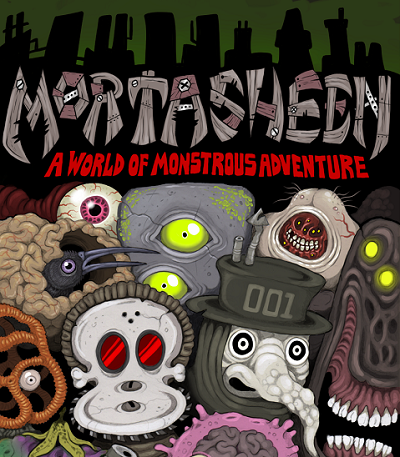 Among the online horror community that are fans of stories known as “Creepypasta” your short story “DAY OF ALL THE BLOOD” stands supreme. Why, it’s even been adapted into semi-viral videos. How has that changed your life?

Very little, actually. The thing about Creepypasta is that not a lot of people pay attention to who wrote it, and just spread it around the web as an “anonymous” story. Even the monumentally popular “Candle Cove” suffered from the same problem. It was written by Kris Straub, the web cartoonist behind Broodhollow and other series, but there were even efforts to do a movie adaptation that never, ever approached him or had any idea who he was.

Why is it that so many people seem to gravitate to such crappy stories as Jeff the Killer or Sonic.exe?

I think it’s just that a lot of them are older, so they were written before standards got a little tighter. For many people they were the first of those stories that they ran into. Now that they’re just spread around as “classics,” they continue to be the average person’s introduction to online horror fiction. 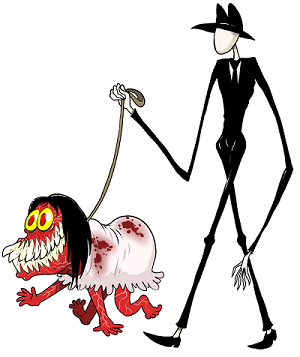 Slender Man taking the Smile.jpg dog for a walk. This drawing is scarier than 98% of what all creepypasta writers have come up with for these characters.

Both your comics and your articles have been published numerous times on Cracked.com. What’s that experience been like?

Mixed, kind of. It was a huge opportunity, boosted my exposure tenfold as well as my confidence, but their “nature is disgusting” comedy is the polar opposite of what I actually stand for, and sometimes I run into people who are prepared to dislike me for my association with a site they consider low-brow and offensive.

That’s kind of the beauty of Cracked, though. They reel in even the lowest common denominator with frat-boy humor, but their articles are usually informative and enlightening to some degree. They’ve probably taught more people more scientific and historical facts by now than your average High School, and they bust a lot of obnoxious myths and fallacies wide open.

They make the mistakes you have to kind of expect from such a huge site with so many different writers and editors, but I’d say their net educational value is a boon to the internet.

You’ve created a new game called Don’t Get Spooked. Briefly describe that for us.

It’s sort of like a classic point-and-click adventure game, but done entirely with images and text. On the surface, it’s pure comedy, making fun of creepypasta tropes with absurd dialog and childish drawings, but as you play you’ll unravel a darker side. Still a silly, over-the-top side, but darker nonetheless.

Don’t Get Spooked also ties in with burgrr.com, a collaborative horror-comedy project between myself and the renowned web writer Slimebeast. Both in turn also tie in with “Borfladge,” a sci-fi horror parody of my own site, and also form a single continuity out of my comics and flash cartoons. For now, I guess it’s kind of my opus, but I do hope to outdo it next Halloween.

How has feedback for that project been so far?

Unanimously positive, although a complex text adventure isn’t something everyone has time or motivation to delve into, so it’s not exactly taken my audience by storm, but it’s a favorite of everyone who has given it a shot. 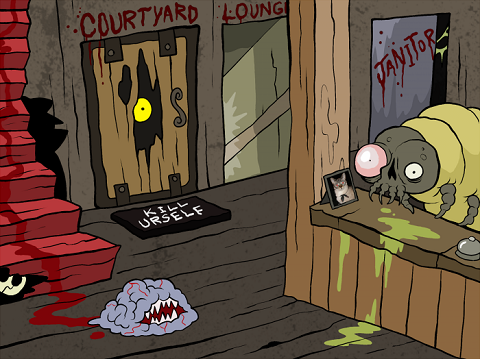 What can your fans look forward to next?

I’m getting involved in a few secret projects, possibly some art books, more games, maybe some whole new mediums in the next year or so! I recently broke into the toy design scene with my contribution to OMFG, a line of collectible mini-figures, and am really hoping to do more along those lines sometime.

Since I feel confident he’s gone now and thus isn’t going to feed me to one of his pet giant nematode, I’d like to thank Johnathan Wojcik for his time and remind any readers to stop by Bogleech and give his stuff a try.