He’s a bestselling author (or at least he wrote part of one.) His articles have over 250,000,000 views on sites across the internet, give or take a few. Alyssa Milano once tweeted one of his pieces. AND he’s a former history teacher! He’s Jacopo Della Quercia. His book, The Great Abraham Lincoln Pocket Watch Conspiracy is available for pre-order with an August 5th release date, but you don’t have to wait to read his exclusive interview here at Gunaxin…

Q. What was your first step to starting a writing career?

A. It’s tough to say what my first step was since I never really planned on having a writing career. My writing grew out of my education in history and politics after professors encouraged me to explore more creative approaches to my assignments. While I enjoyed these experiments, I never viewed them as something I could do as a full-time career. However, all that changed once I realized I could use comedy writing as a way to connect with readers from all over the world the same way I would with students in a classroom.

I guess you could say this realization was my first step towards a writing career since it gave me the confidence and motivation I previously lacked.

Q. How long was the transition from writing being a sideline to being a profession?

Q. What was your day job when you were starting out with writing?

A. I interned at a courthouse while teaching classes at a nearby community college on Medieval and Renaissance studies, which I occasionally lectured on at New York University. By the time I started writing for Cracked, I was teaching classes on Machiavelli’s The Prince while working full time as a staffer on a judicial campaign. It was exhausting work, but comedy writing provided a welcome escape.

Q. How did you get started at Cracked?

A. The same way as most people, I guess. I saw one of their calls for new writers, realized “Hey, I’m a new writer!”, and started pitching away in their writer’s workshop. It’s not a very interesting beginning, so instead let’s just say that I was given an iron coin and told to say “Valar Morghulis.”

Q. How hard was it to start getting published there?

A. Well, getting the iron coin was easy. All I had to do was make that part up. However, sailing to Bravos took a while, as did my ninja training. There may have also been a kindly man involved, but we should skip that for copyright purposes. In short, I’d say it took me about four to six months to figure out what Cracked’s editors were looking for, and how best I could deliver it for them. Like a ninja.

Q. Your articles and videos currently have well over a quarter-billion views there. How do you feel about that?

A. Again, like a ninja, but mainly because so few readers know what I look like. I’ve even met people who doubted whether I even existed! While this means I will probably never be recognized by Alyssa Milano on the street, it does provides some anonymity which can be quite fun on occasion. I’ve overheard conversations in bars about articles I wrote. Another time, I was seated next to a young woman on an airplane who asked me if I read one of my own Cracked articles without knowing I wrote for the website.

It’s fun, but a challenge now that I have a book coming out which very few of my readers know about. This means a large share of whatever success I enjoy as a novelist will depend heavily on word-of-mouth traffic. Fortunately, I could not have asked for a better ninja army of followers, and they know that. As long as they keep holding me to high standards, I will continue to offer them the best possible writing to read and share with their friends.

Q. SInce you’ve written on various topics that were bound to raise some ire (such as the one about Islam) what kind of abuse have you taken from readers?

A. I’ve taken plenty of hate from cyber-bullies and trolls, but it comes with the job. The Internet is a democracy where everyone has a voice, and some people use their voices to elect themselves resident asshole. However, in my experience with instances such as that Islam article, the good will always outweigh the bad. I still receive emails thanking me for that article from people of all ages and backgrounds all over the world. Knowing that my writing was able to make a blind reader laugh or a young girl proud of her faith is… it’s beyond my abilities as a writer to capture. It’s just a good in this world.

Q. Is that part of why you use an alias? (I’m admittedly assuming you’re not really a reanimated Renaissance man on scant evidence)

A. Who says I’m not? I’m Italian in real life. The blood of the Renaissance flows through my veins! Hook me up to an Animus, and I’ll prove it to you!

Seriously though, “Jacopo della Quercia” is just a pen-name, not an alternate lifestyle. I started writing while working as a political operative, so I had no choice but to write under pseudonym. Besides, it’s not like Jacopo was a completely alien name to me. I’ve been addressed both as Jacopo and Jacopo della Quercia in one way or another my entire adult life.

My birth name is Giacomo, which is more or less the same name as Jacopo. The former is merely the Italian of the latter Latin, and both come from James: a name which I have never identified with, for some reason. You wouldn’t believe how many names I’ve been called my whole life: Giacomino, Jacky, Jack, Jaco, Jake, “The Jakester,” etc. I could assemble an entire panel of friends and family who lived their whole lives calling me different names, and that’s without bringing mispronunciations from substitute teachers into consideration. Jacopo is simply the name I write under. It is me in print. In person, I am whatever you feel most comfortable calling me.

Q. Are there any articles were you were surprised how popular they were?

A. Haha! Honestly, all of them! As I said, I never expected to become a writer. Ten years ago I would have resisted the suggestion of it, but now, I have nothing but gratitude for every reader who ever gave my writing a chance.

Q. What’s the article where you were most disappointed with the response?

A. Honestly, I don’t look at my articles that way. Each one was an opportunity for me to expand as a writer, so I don’t really view the results as good or bad. Besides, it’s not like I have full control over my writing. An article could perform poorly due to editorial decisions completely beyond my control. As long as I take something from the writing experience that makes me a better writer, I don’t have much to complain about.

Q. What was the hardest one to complete?

A. There was no hardest one. However, I do have several articles under my belt that took more than a year to complete. I’d say all of them posed an equal challenge to complete.

Q. If you, for whatever reason, were forced to have all but one of your articles removed from the net, which one would you like kept up and why?

A. I’m guessing whatever article I’m working on now. I could just copy and paste all my other articles into it and bill it as a “Greatest Hits” feature piece! Problem solved.

Q. Please briefly summarize for us what your upcoming book The Great Abraham Lincoln Pocket Watch Conspiracy is about. 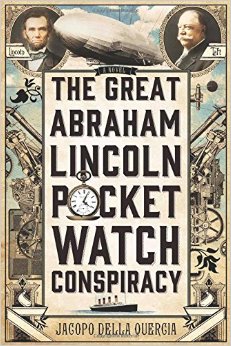 A. It’s a Jules Vernesian action-adventure starring President Taft and Robert Todd Lincoln in a race to solve a mystery stretching back to the Civil War and the Lincoln assassination. The book is heavily based on real events and has been extensively researched with museums and libraries for historical accuracy. It’s a wild ride through American history that I wrote as a love-letter to my readers, and I have no doubt that anyone who ever enjoyed reading my articles will delight in it!

Q. Are there any excerpts from it available online? (wink wink)

A. Yes, there are! The first chapter can be found here on PocketWatchConspiracy.com, the book’s website. I also aim to have two exclusive, online-only chapters featured on the website as well to draw readers into the story before its in stores. Please check them out!

Q. I understand you’re working on a followup. Anything you’d be willing to share with us about that?

A. The next book I’m writing is called License to Quill, and it’s a Ian Fleming-esque spy thriller starring William Shakespeare and Christopher Marlowe during the Gunpowder Plot. I consider it set in the same universe as The Great Abraham Lincoln Pocket Watch Conspiracy, and I hope it is the second of many books I get to add to this storyline.

Thanks a lot for your time.

My pleasure! Thanks for having me.

See more of what Jacopo’s up to here: