Humor > Pop Culture > An Interview With a Pirate

An Interview With a Pirate 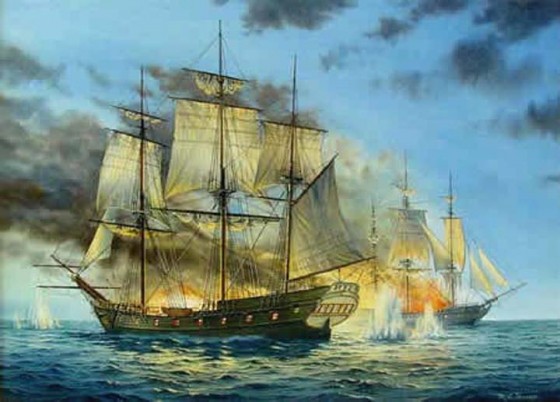 Picture life on a giant, sea-going pirate ship. The salty breezes ruffling through your filthy hair; the incessant groan of hastily assembled timber creaking and shifting around you mere moments from eminent disaster; the cloying odor of ever-present gun powder hanging in the air; and the snarly yelps of “Arrr” and “Yarr” meandering through the scurvy inhabitants of the lifers at sea. Yes, this is the life of a pirate, and as the old saying goes, ‘A Pirate’s life for me…”

So I chose to spend a month aboard the Sapphire Miss in early 1754. Well, ‘chose’ is a relative term, since it was more at sword-point than an actual conscious decision on my part, but that’s mere semantics. The point is (har har) that I was on board the old wooden galleon for thirty days, and thanks to my quick-talking, quick-thinking, and prowess with a quill, I was able to turn the tide (so to speak) on the dastardly crew and make them far more famous than even their exploits would have them. And so I began the interview process.

At first it was just a few simple questions to those scalawags who were assigned to guard my cell and shove fetid meat through the bars. But quickly word spread of my intentions if and when I was able to find freedom, and the captain himself became very, very interested indeed. You see, his wasn’t a ship that had many tales told of her fierceness or pillaging. In fact, his crew in general was far from what many would consider, competent or not ignorant. And so when a proposal was offered that I could make true, he jumped at it, released me from my rusty shackles, and took me on as his private biographer, as it were. And it was truly then, just nine days after my capture, that I really got to know the man, the myth, and the legend known as Captain Deckland “Old Wood-Eye” Fisk.

Me: “Well, Captain… I have to say just what an immense pleasure it is to interview you one on one like this.”

Me: “Let me be the first to really congratulate you on your most recent acquisition of goods from the once sea-worthy Black Dog.”

Me: “Of the procured gains, which were your favorite, might I inquire?”

Me: “Oh! I was unaware that there were any comely woman aboard. Did you snatch yourself a fine beauty this day?”

Me: “Indeed, sir! So you did! And it was that same booty I was making comment on! Was she a sight?”

Me: “I had no idea that making a mutinous bastard walk the plank was such cause for celebration.”

Old Wood-Eye: “Any excuse for a parrrty, me bucko…”

Me: “What was it that the poor soul did to raise your ire?”

Old Wood-Eye: “I caught him tryin’ t’ steal me booty.”

Me: “Though I question how that’s even possible, that’s neither here nor there… did you know the man at all?”

Old Wood-Eye: “Aye, ya stupid galoot! He was me brother!”

Me: “Oh… sir. I apologize again for vomiting on your boots. It just seems especially choppy today, and that soured cabbage and egg, um, thing we had for lunch is disagreeing with me.”

Me: “Well, be that as it may, it has just come to my attention that you have managed to supply an ample portion of your meal in your beard hair.”

Old Wood-Eye: “Aye… I be savin’ those bits for later, me bucko!”

Me: “Y-y-you mean you clean your beard out… by eating the pieces?”

Old Wood-Eye: “Who said anythin’ about me eatin’ them? Mr. Scruffy! Fore and center!”

Me: vomiting uncontrollably over the side as one of the captain’s lesser men removes (and consumes) the bearded detritus much to his enjoyment.

The last day of my voyage with the Captain and the Crew of the Sapphire Miss.

Me: “So you say I am but a mere half-mile from the shores of the Barbary Coast?”

Me: “Wait! What does that even mean?”

Me: “So you’re just going to leave me adrift in this dinghy with maybe two days provisions with the hopes that I’ll make landfall eventually?”

Me: “Well, thanks for nothing! Don’t expect your likeness to be portrayed in any Disney films in the future!”

Old Wood-Eye: “Bah! I’ve no need fer such bilge! Just make sure t’ name a day o’ the year after me!”

And so I was left adrift. Fortunately, and possibly just by dumb luck, the Captain was right and I made landfall in half a day. I made my way back to London and, even as defeated and angered as I was, I still kept my promise. I took my memoirs and the accounts of life aboard the Sapphire Miss and showed them to the local press. They were pretty interested, as it seemed, because most people kept on a pirate ship never see land again. I guess I was lucky. Oh, and despite the lack of interest in the tale by the actual townsfolk, it also appeared that Old Wood-Eye would get his departing wish. From then on, September 19th was to be known as, “Talk Like a Pirate Day”.