Winston Rowntree’s drawings have been used for popular videos like the After Hours series for Cracked.com. His illustrations have been featured in bestselling books (okay, just in one.) His webcomics are so popular and respected that the subreddit r/webcomics has banned his work on the basis of it being “too awesome.” Clearly he’s an artist worth getting to know better, so we’re very grateful he gave us all this chance to interview him.

What got you started in doing comics?

I’ve just always liked drawing for whatever reason, I mean I’m not even that good at it but I was better than most of the other people in elementary school so that was just the identity I latched onto. I’ve honestly wanted to do comics professionally for my entire life, like I actually remember saying that’s what I wanted to do when I was a kid, and the route was way more circuitous than I’m making it sound but this is honestly all I’ve ever wanted to do.

What was your first professional project as an artist?

In terms of having something printed somewhere, the first thing I ever got published was a story in the 2004 Small Press Expo anthology (which they don’t even publish anymore, as far as i know). It was a story called “untitled.”

I was always happy with that one actually, it was the most i could do with 12 pages. I had to scan the pages at some internet cafe that doesn’t exist anymore, that feels like an extraordinarily long time ago. I genuinely never thought I would ever be doing this full-time, like it just never seemed possible.

What was it that got you involved in comics in particular?

My dad always liked comics, so they were always around when I was a kid, Tintin and Asterix and such, and I definitely followed in his footsteps in terms of liking words and pictures. I’m permanently grateful to him for that, among other things. My mom too, equally. They’re both writers and both smart and very cool and i just try to live up to that as much as possible.

Of your non-Subnormality comics on your site Viruscomix, which one is your favorite?

Oh, I think just the Captain Estar comic. It was the first large project that i worked hard to actually finish, which taught me that I could actually finish something (which is a bigger deal than it sounds I think, as far as artistic lessons go). And it’s a story I’m pretty happy with, and spent a number of years on.

It kind of started in some arbitrary place with a character design and then I had a dream with certain elements of the finished story and I was like “that would be a cool graphic novel, too bad I can’t make graphic novels,” and then I was like “well… why not though…?” I just randomly started doing the comic, and this is the first draft I’m talking about—there’s an original pencil-only first draft version of the comic that i gave up on after like two-thirds of the story. Then I started redoing the entire thing a few years later because the story had been stuck in my head for so long, and I gradually hammered it out over like three years I think.

I still would like to redo the entire thing a third time with actually good art and rewriting where necessary, but that’s not something that i have time to do unfortunately. It’s the first project I did that really meant something to me and the first character I created who really had a lot of myself incorporated, and also the origins of my writing process where I’ll kind of constantly be open to improvisation and generally making things up as they go along and letting the characters do what they would do once the general framework of the plot is established. It’s not f***ing brilliant or anything, I just like it, sentimentally.

You’ve got comics on your site you mention the New Yorker rejected. Now that you’re more famous-ish, have you considered resubmitting them?

I certainly have no plans to submit any comics to the New Yorker again. I just heard they paid a lot for comics and one needs to pursue all the avenues one can so I was like fuck it, I’ll just send in half a dozen and make sure the ones I’m sending are objectively good enough for their magazine and if they say no then (or say nothing) who cares. Their process is focused on quantity/longevity—they basically want people who are willing to submit dozens of comics to them for weeks on end and thus prove they can produce material on a regular basis, which sure isn’t what I would do but fair play to them if their focus is to build a stable of reliable contributors rather than just look for the individually best comics. But I mean f***, man, they don’t even tell you where to send comics submissions, you have to kind of figure it out like some kind Alternate Reality Game.

I don’t want to rant on like the f***ing most bitter person ever, but I will say that they have the most elaborately researched and well-written and assiduously fact-checked articles in the business, and then next to them they put borderline stick-figures telling jokes from 1950, and I’m not gonna feel bad for thinking that’s kind of jarring.

Your comic Subnormality’s mascot character is a sphinx. Why that character?

She just emerged as the most popular character I think, or at least the most distinctive and thus most suitable for being a mascot. She looks good in silhouette, I guess!

Was she always meant to be the mascot or was that a gradual thing?

Nah, she wasn’t even intended to be a recurring character, it just kind of became necessary to revisit her because in the first comic she was in she came out more interesting and memorable than I’d intended, and then like all my characters she became useful for exploring certain aspects of my own thoughts. I wish she was in more comics, but she’s just hard to write. 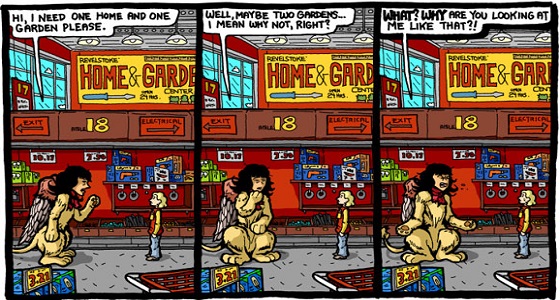 Among the Subnormality comics, which one is your favorite and why?

There are a lot i’m proud of and a lot that could be better, my favorite ones are probably just the ones where I couldn’t improve them if I redid them today (probably not a long list, but oh well). Off the top of my head I think my favorite is the second Museum of the Theoretical one with the multiple Ethels.

As much as the art could be improved, I’m actually really quite happy with the dialogue and the story was overall just a message that I was happy I hammered into something cohesive. It was just the result of trying to feel better about paths not taken, and thinking that maybe it’s okay to feel good about your current path in life despite any perceived missed opportunities, which is like a huge deal I think, and I’m glad I managed to work it into a comic.

Which one seems to be the most popular with readers? 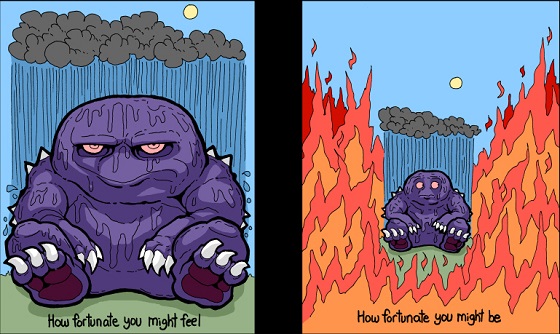 It’s sold the most posters, relatively speaking, and it gets linked to the most on other sites as far as I know.

Which one seemed to piss the most of the right people off?

I don’t think I’ve done anything likely to piss that many people off, nor is that really my M.O. I’ll do that more with stuff on Cracked just because it’s a different part of my brain and I kind of shake out the hate a bit more over there, but I still try to be as fair as I can towards groups I disagree with (except for Nickelback). A couple people took exception to the Sexism column I wrote I guess. I’ve been thinking that if lots and lots of stupid a**holes feel so disenfranchised and powerless that they need to leave a bunch of online comments on Sexism articles about how women are inferior then that’s maybe sort of a good sign in a perverse sort of way. They’re not being heard anywhere else, in other words, they have no voice in the media, they’re lashing out in desperation, which is welcome news. 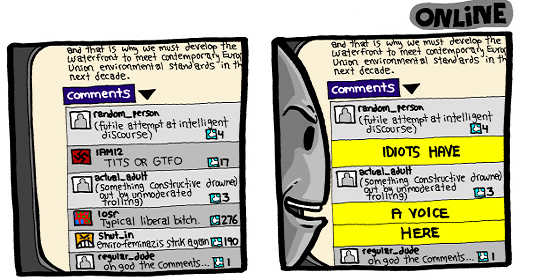 Which thing seemed to piss the most of the wrong people off?

Again, there’s been nothing to induce a flood of negative emails or anything. I honestly live in constant paranoid fear of unintentionally upsetting people that I don’t want to upset, so that’s one way to avoid it at least. If you’re constantly afraid of it happening it at least tends to not happen. Or I’m just really irrational, or both.

Your Viruscomix pages are not covered with ads. We here at Gunaxin.com think that’s downright obscene. How do you live with such a decision?

Obviously it was a financially stupid decision to never run ads, but I just could never pull the trigger on that one. As much as it would have paid the rent, there are things I’m doing now that I may not have pursued if I’d already been comfortable financially, and that would have been pretty tragic. You gotta stay hungry, even if it’s stupidly and not-really-intentional. And I just hate ads, I mean everyone does. I can’t even use the internet without having Adblock installed, so it would be pretty dishonest to run ads on my own site. Like if I was scrambling to support a family or something then I’m sure I would have compromised on that, but I’m not. I certainly don’t judge anyone else for doing it, not that anyone should care what I think. Ad revenue honestly can be the difference between doing this full-time and doing it part-time though, so if you’re an online artist reading this, don’t do as I do, do what makes sense for you.

What can readers look forward to from you next?

Just the return to my regular projects. I had to put everything on pause for a few months because I was fortunate enough to have a book illustration gig come my way and it was a substantial amount of work. I’m back to Subnormality and Cracked now finally so people can expect new stuff there as soon as it’s done. As much I know everyone is super understanding about the realities of freelance gigs and having to wait I still want to make up for the gap and come back strong so the next comic will be as ridiculously long as I can possibly make it. I want that feeling of pushing the envelope, going further than before, going somewhere new, though only in the context of an idea and story that’s best served in that manner. Working on it nonstop right now, and it’ll be done as soon as it’s done, and then I’ll get working on the next one…