Since 2008, Ryan Hudson’s webcomic has grown to become one of the most popular online. It became huge enough through tumblr, Reddit, and Stumbleupon that he’s joined the creative team behind Cyanide & Happiness. And all that while having the natural disadvantage of coming from Utah. Now let’s see what he has to say for himself.

What inspired you to start Channelate?

I wanted to start a cartoon channel for animated projects I was working on. I started posting comics as a way to begin building an audience, so that when my animations were finished an audience would already be in place to see them. When the comics were well received right out of the gate, I changed my focus.

Were there any precursor comics?

I made a failed attempt at a webcomic the year before I started the current Channelate. I drew four comics that were very much the same type of humor I do now, but the art was fairly different. The comics were actually posted on Channelate.com, but the series was titled “Random Hilarity”. I was pretty new to digital art and each comic took six plus hours to complete and I gave up with the intention of trying again later.

How do you make sure that Channelate stays fresh and has a distinct voice?

I feel like I can keep Channelate fresh as long as I’m writing jokes that make me laugh. After writing 900+ comics over the last six and half years, I have a somewhat higher bar for what makes me laugh. I can’t write the same cliche jokes ten times each and expect them to continue to make me laugh. As for a distinct voice, I think that just comes naturally when you do something over and over for a long time. The jokes in my comics are a familiar style, but I like to think I have developed my own flavor.

Did Channelate accumulate a following gradually or suddenly?

Channelate’s following has accumulated gradually with occasional sudden bursts. It has had some great natural growth via word of mouth. It has also had bursts of new readers showing up due to shout outs from cartoonists with much larger audiences.

Do you have any comics you regret posting because they alienated readers while not satisfying you either?

I’ve never had a comic alienate a large group of readers. But there have been a couple instances where either I regretted posting a comic because I worried it would misrepresent my views, or where I have posted a joke knowing it was crap and had that hunch validated by a negative response. Really, only once have I removed a comic from my site due my own dissatisfaction.

Which comics of yours have been surprise hits?

A comic I posted back on February 15, 2012 called “Bear in Camp” has been my most widespread comic to date. 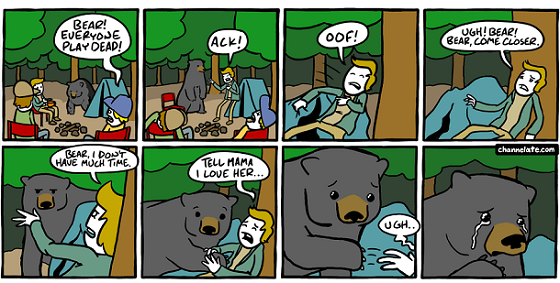 Honestly, I knew it was a great joke. I laughed my ass off when my wife and I first wrote it over instant messenger. But, I had no idea it would be such a hit. There have been numerous times at conventions where someone will see a print of the comic at my booth and they recognize it from some random corner of the internet, not knowing anything about Channelate. It’s a trip.

Which comics have been the most surprising bombs, if any?

I can’t think of any specific examples off the top of my head, but know I’ve had some surprising bombs. I really do try to have a high bar set for my humor, so anytime I miss the mark significantly, it can leave me wondering why.

You made some Youtube videos but so far it hasn’t become very big. Are there any plans to make any new videos for this channel?

How did you get in touch with the makers of Cyanide and Happiness and become one of their animators?

The first time I talked to them was when they featured my comic in their “Stuff We Like” section on explosm.net and I emailed them to thank them for the plug. Two years later when I saw they were Kickstarting their new animated series, I emailed them about potential animation jobs on the show and I’ve been working with them since then. I’ve been fortunate to have the opportunity to not only animate on the show, but also contribute writing, storyboarding, voice acting, and even some 3D animation.

This one was co-written by him.

See more of What Ryan Hudson gets up to at the following sites: