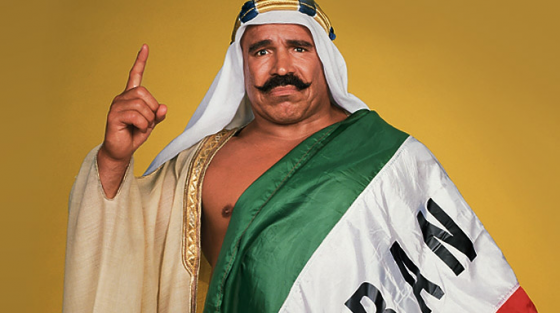 Watching the Iron Sheik in the 1980s wrestle good guys like Hulk Hogan was like witnessing the epitome of evil battle the forces of good. My blood boiled at the sight of this Iranian hoodlum badmouthing Hillbilly Jim and Junkyard Dog. Also, he was from Iran, and last I checked, the United States is still at odds with those jabronis.

Fast forward to today. The Iron Sheik, who turns either 70 or 73 years old Friday (the Internet isn’t sure if he was born in 1940 or 1943), hasn’t changed a bit. And thanks to Twitter, he continues to dish out profanity-laden insults in his classic broken English, threatening to camel-clutch and humble everyone from Chris Brown to the Ultimate Warrior. The difference now is that I am no longer a child and suddenly appreciate the fact that no wrestler in history has played a character (heel or face) better than Hossein Khosrow Ali Vaziri.

The Sheik’s Twitter commentary is pure genius, as he gives us random bursts of anger, threats of violence, and even praise for sports and pop culture figures, presented with such passion and enthusiasm that you can’t help but be entertained.

While the Sheik’s Twitter feed isn’t for everyone, he’s successfully made the leap from talking trash in the ring to trolling the Internet in a manner that keeps people tuning in.

Happy birthday, Sheik. You’ve outlived many of your colleagues, and we hope you’re around to give us your wit and wisdom for years to come. Never change.

Here’s a great video of the Sheik with New Jack and Honkey Tonk Man talking about Ric Flair. Sheik steals the show.